'In the hands of a majoritarian government, with utter contempt for the cultural plurality and diversity of our great nation, the pipe dream of making Hindi the sole official language takes on nightmarish proportions.'
A revealing excerpt from A R Venkatachalapathy's Tamil Characters: Personalities, Politics, Culture.
Illustrations: Dominic Xavier/Rediff.com 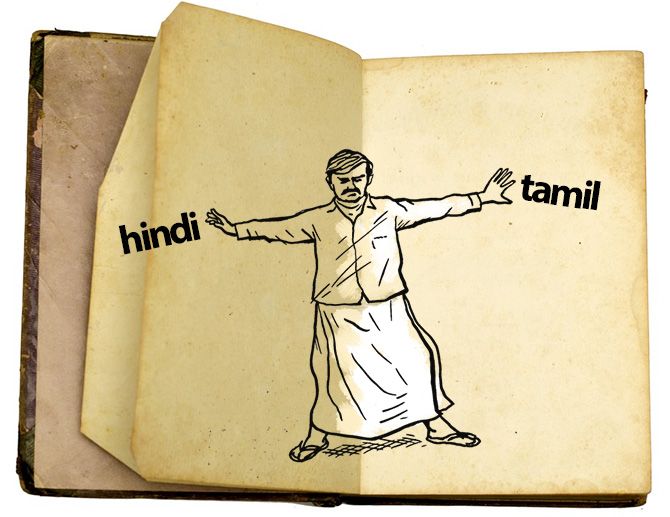 In a book ominously titled India: The Most Dangerous Decades (1960), US political analyst Selig Harrison was very much the prophet of doom when he warned of 'the risk of India being split up into a number of totalitarian small nationalities' -- if not 'a million mutinies' as an even more bleak commentator would remark some decades later.

A seedbed of discontent he identified was the Tamil south.

Even though the rising DMK had formally forsworn secession from the Indian Union in the wake of the Chinese aggression of 1962, this was one prediction of Harrison that was not too far off the mark.

Language was a chink in the nationalist armour throughout the long anti-colonial struggle.

Even from the turn of the twentieth century attempts were made by well-meaning nationalists from south India -- the poet Subramania Bharati, for instance -- to popularise the teaching of Hindi.

But Hindi zealots were not particularly helpful with their endless debates, and resultant confusion, on defining Hindi and Hindustani, and its relationship with Urdu and north Indian Muslims.

However, when the provincial Congress committees were reorganised in 1920, it was clear that for the national movement to succeed it had to accept the reality of the diversity of languages -- Hindi could not be a binding force.

The seeds of language conflict were present even in the founding moment of the Indian nation State as its constitution was being drafted by a Constituent Assembly elected by a limited franchise.

With the boycott by the Muslim League representatives the assembly was little more than a Congress legislature party.

The most acrimonious debates in the Constituent Assembly were, interestingly, not on a common civil code, but on the question of the official language of the Indian Union.

The arguments demonstrated that both sides viewed language as underpinning national unity -- only that if the Hindi zealots saw Hindi as a unifying force, its opponents saw its imposition on an unwilling south as the cause of discord.

In the event, Hindi nudged its nose at the finishing line by the casting vote of the president of the assembly, something that did little to legitimise Hindi's new constitutional status.

The fifteen-year deadline for English to be an associate official language only postponed the day of reckoning.

The force of sentiment against Hindi could not have been lost on the members of the Constituent Assembly.

Barely a decade earlier the Congress government in Madras Presidency had faced a most popular agitation against the teaching of Hindi compulsorily in schools.

The Congress's use of the same brutal colonial methods they had earlier condemned added to the force of the movement.

The anti-Hindi agitation of 1937-1939, it became clear, had strengthened a Tamil regional identity that continues to thrive.

And it made a Periyar ('the venerated one') of E V Ramasamy, who led the movement. 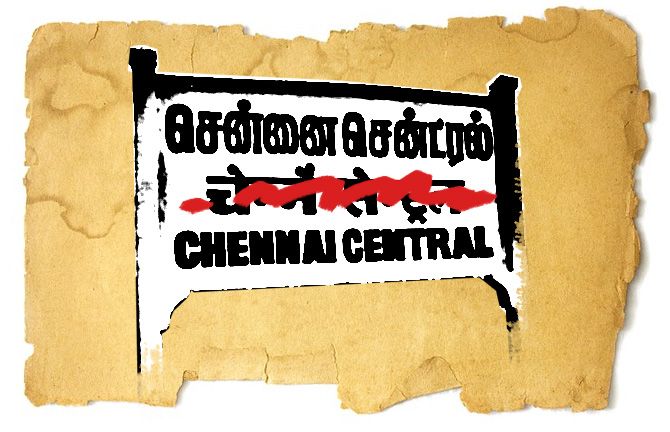 Subramania Bharati is presumably known to every educated Indian, even Hindi zealots.

Not so his childhood friend Somasundara Bharati.

Somasundara Bharati was V O Chidambaram Pillai's associate in his great anti-British swadeshi shipping venture; his daughter Lakshmi went to prison for the cause of India's freedom and his son-in-law, L Krishnaswami Bharati, was a member of the Constituent Assembly.

But, in 1937, to protest compulsory Hindi in schools, he left the Congress to join the anti-Hindi agitation.

This is how Hindi zealots, ostensibly for the greater good of the nation, actually end up driving nationalists away.

Their case is usually made in Hindi, resulting in a dialogue of the deaf.

Only to give it up as counterproductive, the arrogance and insensitivity of Hindi advocates contributing in no small measure to their disillusionment.

In 1948, soon after Independence, there was another anti-Hindi movement, but of much lower intensity when the government attempted again to reintroduce compulsory Hindi in schools.

This provoked a re-enactment of the earlier agitation.

Significantly, the movement was suspended briefly when the government was engaged in the so-called police action in Hyderabad, only to be revived again.

At the intervention of Kamaraj, the popular Congress leader, the government backtracked and consequently the movement was withdrawn.

With the promulgation of the Constitution, the debate shifted to the question of the official language of the Indian Union.

The years leading up to 26 January 1965, when Hindi would become the sole official language, were marked by continued arguments and debates.

The 1950s were marked by minor agitations such as the tarring of Hindi letters on boards at railway stations.

In the various DMK conferences organised during this period the imposition of Hindi was a recurrent theme.

Matters came to a head as the date approached.

The DMK spearheaded the decisive anti-Hindi agitation of the 1960s.

Paradoxically nobody strengthened the case against Hindi more than the Hindi fanatics themselves.

P Subbarayan, who had at best been evasive in the Constituent Assembly, and Suniti Kumar Chatterji, arguably the most distinguished of Indian linguists, both wrote notes of dissent to the report of the Official Language Commission (1955-1956).

The most spectacular convert was the sagely Rajaji.

The man who had borne the brunt of the 1937-1939 anti-Hindi agitation had a change of heart, and gave much legitimacy to the movement.

As the pitch of the pro-Hindi camp became more and more shrill its every argument continued to be effectively nailed. 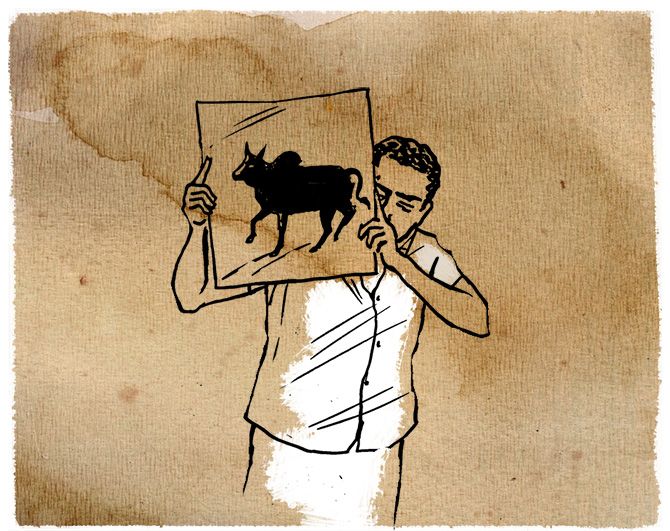 Countering the Hindi-is-the-majority-language argument, C N Annadurai quipped that, in that case, the common crow, and not the peacock, would have to be India's national bird.

Adverting to the case of national unity, Rajaji pleaded, 'Let us not make the sixty million people in the South seditious, by one stroke'.

If Anna's distinct Tamil rhetoric on stage and in the press enthused the newly mobilised masses of Tamil Nadu, his forceful arguments in English in the House of Elders, and the coldly reasoned articles of Rajaji in his journal Swarajya, left Hindi zealots fumbling for rational answers.

Nehru's legally-not-binding assurance that English would remain as long as the south wanted did little to solve the problem.

In fact, every successive move by the state to resolve the issue -- for instance, the Official Language Act, 1963 -- was seen as pandering to Hindi demands rather than assuaging southern fears.

With the DMK declaring Republic Day 1965 as a day of mourning the stage was set for unprecedented turmoil.

If even the moderate Rajaji suggested that 'Part XVII of the Constitution', containing the section on the official language of the Union, 'be heaved and thrown into the Arabian Sea', the DMK preferred its burning.

Thousands were arrested and top DMK leaders incarcerated, lending them an aura which was to be converted into electoral power in a few years.

The near-spontaneous uprising of students -- many of whom were first-generation literates and graduates -- marked the changing social base of politics in Tamil Nadu.

Self-immolation as a form of protest swept the state resulting in the creation of scores of martyrs for the cause.

An expression of subaltern commitment and despair, it was a favourite stick to beat Dravidian politics with until upper-caste protestors resorted to it during the anti-Mandal protests.

The brutal repression let lose by the State -- compounded by overzealous district officers such as T N Seshan -- ensured that the Congress lost power in the 1967 elections.

Symbolic was the defeat of K Kamaraj, 'the kingmaker', at the hands of a young student leader.

The unintended consequence was the emboldening of Indira Gandhi to decimate the Congress syndicate.

It is over half a century since the anti-Hindi agitation of 1965 and Delhi's assurance that English will continue to be the associate official language until non-Hindi-speaking states so desire.

Since the days of the Constituent Assembly no intellectual argument has been made for why the south should accept Hindi.

What has changed in the fifty years since the 1965 anti- Hindi agitation?

If anything, the case for Hindi has weakened.

Over the last many decades, south India has made rapid strides in the social, political, and economic spheres.

The social transformation triggered by Mandal was modelled on a caste-based reservation system fashioned in Tamil Nadu.

The rapid strides in education in the south have underpinned the software revolution and the leap in the service sector.

On the other hand, the unending stream of uneducated and unskilled labour from the north flocking southwards selling pani puri on the streets and manning security gates is poor advertisement for the much touted employability potential of the Hindi language.

The vitality of the little and middle magazine tradition in Tamil outstrips anything remotely similar in Hindi.

Despite the billions of rupees spent on official language commissions, government largesse, and the appointment of Hindi officers in every central government office only sarkari Hindi -- which is about as fecund as a mule -- has thrived.

On the contrary, with little or no government patronage, Tamil and Malayalam constitute a far more vibrant presence in the virtual world.

Unserviceable technical terminology coined in government offices and gathering dust in musty tomes does not make for a scientific language.

Such inadequacies apart, Hindi's trajectory in modern India has been inflected -- or rather, infected -- by Hindu communalism.

Hindi zealots have, on the one hand, been intent on Sanskritising their language and, on the other, erasing its rich dialectal variety, leading to separate movements such as those to protect Maithili and Bhojpuri.

In the hands of a majoritarian government, with utter contempt for the cultural plurality and diversity of our great nation, the pipe dream of making Hindi the sole official language takes on nightmarish proportions. 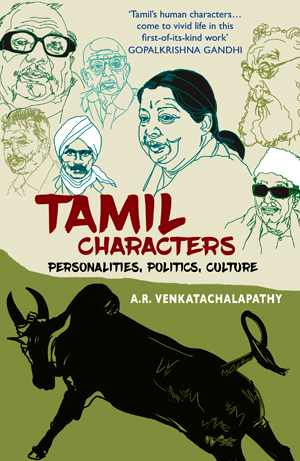 Excerpted from Tamil Characters: Personalities, Politics, Culture by A R Venkatachalapathy with the kind permission of the publishers, Pan Macmillan India.

A R Venkatachalapathy
Print this article 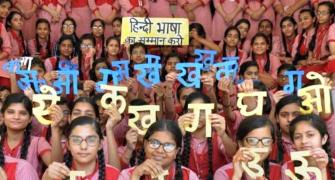 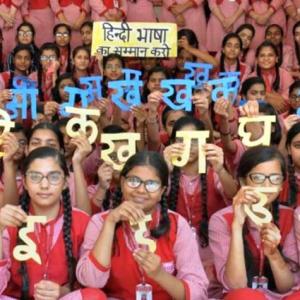 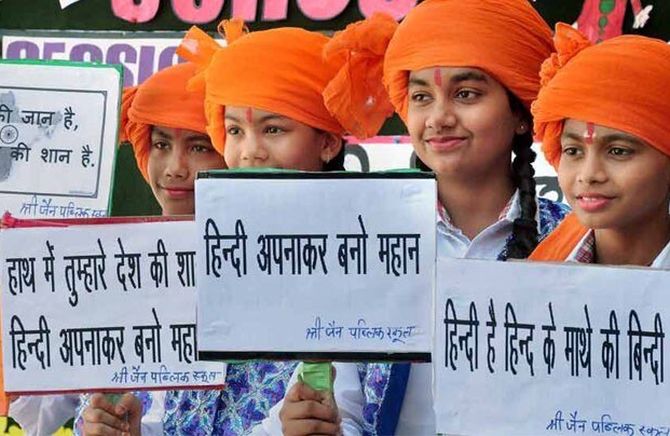