News
Business
Movies
Sports
Cricket
Get Ahead
Money Tips
Shopping
Sign in  |  Create a Rediffmail account
Rediff.com  » News » 'The war has come home to us'

'Vibhuti was a braveheart.'
'He always said I cannot stay behind. He always wanted to lead.'
A cousin and friend remember Major Dhaundiyal who made the supreme sacrifice for the motherland on Monday. 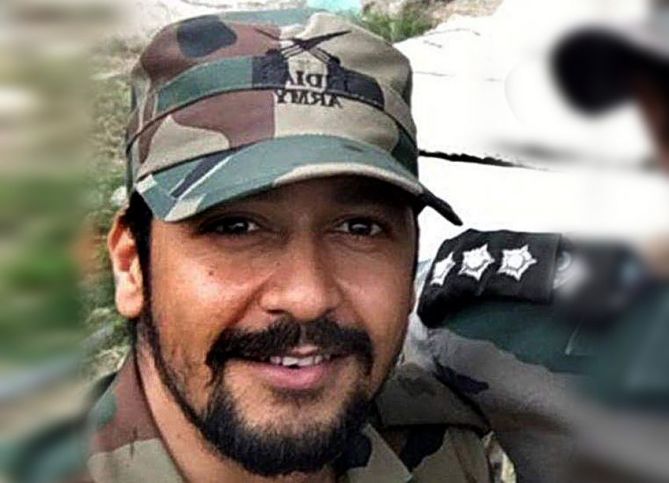 Rohan Raj was at Major Chitresh Bisht's funeral in Dehradun when his phone beeped. The Whatsapp message brought terrible news -- his school classmate of 8 years, Major Vibhuti Dhaundiyal, had sacrificed his life fighting terrorists in Pulwama on Monday morning.

He was at the funeral of a soldier martyred two days earlier defusing an improvised explosive device, and now he had lost a soldier and a friend with whom he had played mischief at school.

He thought of a photograph of them as little boys in school uniform. He thought of the time he bumped into him in a cafe in Dehradun.

After attending Major Bisht's funeral, he went to Major Dhaundiyal's home. This was the first time he was visiting martyrs's homes to pay homage. He did not go there because both young men were alumni from his school; he went because he thought at this time in the country, it was the right thing to do.

"As ordinary citizens we feel the war is somewhere else but now it has come home. I had to go," Rohan, 34, an engineer who runs the Book Nerds Club in Dehradun, tells Archana Masih/Rediff.com.

"I chose to go because we have to change our attitude. Whatever we can do to support the defence services, we must. This is what I could do. This is my town, these were our boys." There were around 2,000 people who paid their last respects to Major Bisht.

At Major Dhaundiyal's home; his mortal remains had not yet reached, but crowds had started gathering.

His widowed mother had not been told that her only son, born after three girls, had died of gunshot wounds fighting terrorists. The crowd was held at bay around 50 metres from the home, behind barricades set up by army personnel, so that the terrible news could be kept away from her -- for some time at least.

All she was told was that her son had been wounded and critical, but would make it.

"I am not an aggressive person, but today I am very angry. So many people are," says Rohan, over the phone from Dehradun, a city with a military tradition with three cantonments and the Indian Military Academy.

"Looking at the people there, it seemed as though it was a personal loss for everyone. These families are like every family who wanted the best for their kids."

Several schools in the city were closed as a mark of respect. 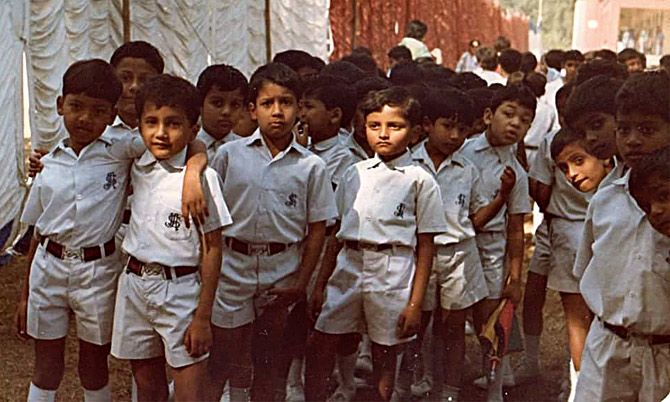 Three Dehradun officers from the armed forces have been martyred this month. Squadron Leader Siddharth Negi died in the Mirage 2000 crash in Bangalore on February 1.

Major Dhaundiyal, 33, was married in April 2018 and had spent New Year in Doon before joining his Kashmir posting. His wife works at a multinational company in Delhi.

"He had just come home and we had invited the couple to our home for a meal. He had done such masti and said he would try for leave again in April-May," says cousin Ravi Dhaundiyal, who lives two homes away.

"We couldn't invite them for the customary meal after their wedding, so had invited them now. The couple had such great bonding," he says in a voice burdened with grief.

The Pulwana operation on Monday morning against Jaish-e-Mohammad terrorists had continued till late last night. Three Jaish terrorists, including a Pakistani linked to the February 14 bombing, were killed in the gun battle.

The injured included Brigadier Harbir Singh, who has been shot in the ankle, and DIG (South Kashmir) Amit Kumar, with a gunshot wound in the abdomen. They are being treated in hospital.

"Vibhuti was a braveheart," says Ravi.

"He had dhun (an obsession) to join the army. He was not selected the first few times, but did not lose hope and finally made it."

"He always said I cannot stay behind. He always wanted to lead," says Ravi, disconnecting the phone just as his cousin's body reached home last evening -- for the final time. 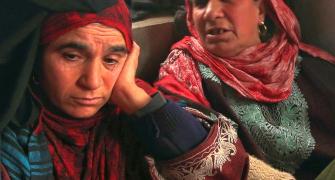