'The committing of the SFF into operations in Ladakh is a signal from New Delhi of how seriously it takes the Chinese intrusions and the lengths India will go to in combating them.'
Ajai Shukla reports. 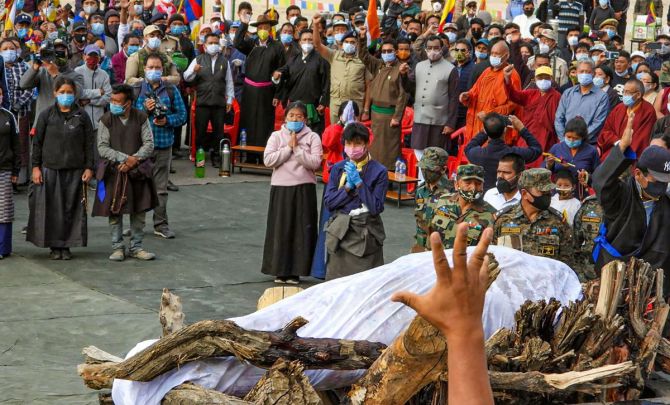 IMAGE: Ladakhis pay homage to Special Frontier Force commando Nyima Tenzin who lost his life in the last week of August when he stepped on a landmine near the Line of Actual Control during his funeral in Devachan, Leh. Photograph: PTI Photo

At 7 am on Tuesday, a small army convoy rolled into the Tibetan settlement of Choglamsar, adjoining Leh, the capital of Ladakh.

Inside a truck, draped in the Indian Tricolour, lay the coffin of Company Leader Nyima Tenzin of the Special Frontier Force, an elite paratroop unit manned by volunteers from the 120,000-strong Tibetan refugee community in India.

An army officer handed over Tenzin's body to his wife and three children.

A Tibetan nationalist at heart, with his loyalty to the traditional Snow Lion flag, Nyima Tenzin completed his last journey wrapped in the Tricolour by a grateful nation, which he had served for 33 years and for which he laid down his life on the towering heights above the Pangong lake.

The army also delivered news of the grievous wounding of 24-year-old Tenzin Londhen in the same operation.

Both these soldiers were from 7 Vikas, one of the seven SFF battalions -- almost a division worth of Special Forces -- that have been moved to Ladakh and deployed against the Chinese.

Details of the operation in which Tenzin died remain secret, but it is learnt to have resulted in Chinese casualties.

The SFF was raised in November 1962 in the aftermath of India's crushing defeat by China.

Codenamed 'Establishment 22', it initially consisted of a ragtag bunch of 'guerrilla companies' tasked to operate behind Chinese lines.

Issued United States weapons and trained by American instructors, most recruits were fresh from Tibet and could not speak Hindi or English. Interpreters were needed to interface with them.

Today's SFF is recruited from Tibetan refugee communities dotted all around the country. Many speak Kannada and Oriya better than Tibetan.

"The tsampa eaters have become dosa-eaters," says an old-timer regretfully, referring to the traditional Tibetan cereal.

What has not changed about these superb highland troops is their ability to function normally at altitudes that drain plainsmen.

As the SFF's role evolved, it was decided they would be infiltrated in wartime into Tibet, or para-dropped deep inside that territory.

There, they would operate in small groups, disrupting and sabotaging People's Liberation Army columns.

They would live off the land, dependent for food, shelter and security on a restive Tibetan populace that remains intensely hostile to the Chinese.

Initially, the Indian Army strongly resisted this new force. Facing severe criticism in 1963 and eager to prove his force's worth, the SFF chief sent 120 Tibetan soldiers for an army field exercise, codenamed Garuda. This proved to be a dramatic success for the SFF.

In the 1971 Bangladesh war, the SFF further distinguished itself, with its soldiers winning 580 cash awards (they were not eligible for gallantry awards).

Almost 250 SFF soldiers were casualties in that conflict.

Yet, till the 1980s, the SFF's salaries, perks and ration scales remained below those of the army. Instead of pensions, SFF soldiers got a lump sum payment on discharge.

Today, the SFF is paid and equipped on par with the army.

"The committing of the SFF into operations in Ladakh is a signal from New Delhi of how seriously it takes the Chinese intrusions and the lengths India will go to in combating them," says a senior diplomat and China expert. 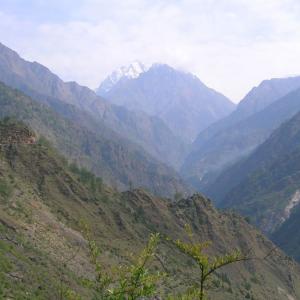