Service for the Soul 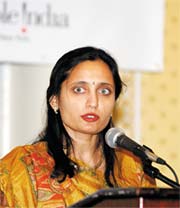 I am both honoured and humbled to have been selected as the recipient of this award in a year that had such tremendous contributions from Indian-Americans in politics, literature, music and health. We have much to be proud of as a community.

I also want to thank India Abroad. They have done a fantastic job over the years, connecting the Indian-American population here in the US and at the same time to India.

But, as honoured as I am to be recognised individually, it would be a great tribute to what we are trying to do if you all remembered less about 'who is Sonal Shah' and more about the inspirational force of service embodied in Indicorps and the new generation of leaders that Indicorps is trying to build.

My own personal story -- how did I get here today -- is less about my professional accomplishments than it is about the very personal journey of living a full, rewarding and principled life. It is about pursuing a small set of hugely important beliefs each and every day:

I believe that positive change starts with just one person.

Consider the story of 23-year-old Indicorps Fellow Shezeen Suleman. She had no connection to India except her heritage. A heritage that was so important that her family still spoke the local dialect of Kutchi at home -- even after four generations. She is the first to return to India in 150 years. She went to India to find her roots and to work on a watershed development project in Kutch. That experience had a lasting impact not only on Shezeen, but the entire community around her.

This is a woman that strives for the best even under the toughest of circumstances.

She worked with her community to solve their drinking water problems by assisting them to plan and build four wells; two check dams and two underground water tanks. She was so good that, when she was done with her project, villagers were walking from 20 kilometres away to ask her to teach them how to do the same things.

This is a woman that does not accept 'chalta hai, hota hai' as good enough.

When she saw that young children were not going to school, she started an informal school for the children that needed extra help.

This is a woman that understands the value of selfless service.

When Kutch had massive floods this year and we were afraid the houses, and the people along with them, were going to be washed away, she refused to leave the community behind. She would only accept an Indicorps evacuation if that evacuation included the entire community. 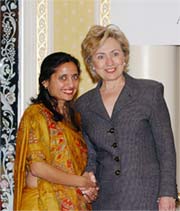 This is leadership. Shezeen is the face of Indicorps. Her journey and that of our other 19 Fellows is what my brother, sister and I envisioned when we started Indicorps.

We envisioned an organisation that holistically empowered individuals by reconnecting them to their roots -- to understand what it means to be Indian-American, we must understand both India and America. It is by understanding who we are that we facilitate leadership.

Understanding our culture fosters a sense of self-pride. You can say but why go to India to learn this? Because it is when you experience the spirit of India that you see beyond the façade of the dirt, the corruption, the lack of sanitation and you really begin to see the people, their daily lives, their strength and their undying faith in everything around them. You see a place where:

This is India. It is through this sort of grassroots reconnection that we see not only what we mean to India, but more importantly what India means to us.

We envisioned an organisation where service is more than just doing the right thing, it is a transformational experience for the individual and the community.

It is through service that:

We learn to give with no expectations in return and understand that the journey matters;

Take Rish Sanghvi -- he left his consulting job in California to help market handicraft products made by the children in the largest slum community in Ahmedabad. Although he grew up in India, it was through service that he was able to re-connect. In Rish's words:

'As a Bay Area resident for 10 years, the tug of the all powerful Silicon Valley dollar was strong. But something about the purported mission of Indicorps -- 'service for the soul' -- had an almost romantic appeal. It sounded like a good idea to serve the country of my origin, learn from it, immerse in it. So I embarked on a one year journey -- a year that now stands out as the definitive catalyst of a lifelong transformation.'

But, it is not just the fellows that have transformed -- we have also seen communities transform: where they work together to dig a new well because they understand the strength in working together; build a cooperative, so they can combine their efforts to market their products; their children aspire to go to college because Fellows are tutoring them on their toughest subjects; and where children graduate from top colleges and come back to become teachers in their communities because they want to make a difference. It is through service that we have not only empowered ourselves, but those around us. 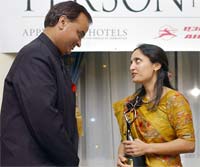 'Never doubt that a small group of thoughtful committed citizens can change the world, in fact, that's all that ever has.'

But perhaps most of all, when we created Indicorps, we envisioned an organisation that fosters the creation of a new type of leadership.

A cadre of leaders that:

At Indicorps we want to nurture these leaders. We want to show that aside from being a financially successful Diaspora -- that we as Indian-Americans are making a larger contribution to the world. We don't think about the 'what ifs' -- we think about the 'what wills'; every problem is simply an opportunity; every problem is a solution waiting to happen. By strengthening individuals that make up our community, we want to develop leaders not only for India -- but also for America and the world.

It is important, as we have seen in the world -- that providing moral leadership is one of the most important things we can do. It is about our ethics and how we choose to apply them; it's about what we stand for; it is about what we choose to do under the toughest of circumstances; and it's about including others in the process -- it is not just about individuals, but what we as a community and nation can do to improve our own lives and bring along others with us. That is real leadership.

Seven years ago, Indicorps was only an idea, a dream, really. Three years ago, my brother, sister and I pooled our savings. With $50,000, a lot of will, and heavy dose of inspiration from our parents, community and friends -- that dream became a reality.

Today, we have more than two dozen other people in our family and a new generation of leaders that are inspiring thousands more. We will be there to help them whenever and wherever we can -- through all of their trials and tribulations. I urge you to join me, to join us, in any way you can to develop our next generation of leaders -- they are the future of our country both here and in India. They are already making a difference.

Today, we find ourselves in precarious times. We live in a more interconnected and interdependent world than ever before. Where people are questioning whether the 'negatives' of globalisation outweigh the benefits. People are afraid of losing their jobs, are suspicious of their neighbours and fearful for their own security. Here is our challenge -- we can choose to be afraid, become more sceptical, more protectionist and focus on ourselves and our immediate family.

Or we can make a difference.

Let us show the world that there is an alternative.

One person can make a difference. I urge you to come join us in service -- in your neighbourhoods, your communities, your nation.

Indicorps is but one example of many organisations that are connecting, empowering and achieving. We each have the power to make the difference. Be that change. Join us in our journey.

Indicorps founder Sonal Shah is India Abroad's Person of the Year 2003. This is her acceptance speech.