The living will do anything to save their lives.
The dead can't defend themselves.
Will Sheena Bora's good name survive her murder trial?
The scintillating final part of Savera R Someshwar/Rediff.com's report from the Sheena Bora murder trial. 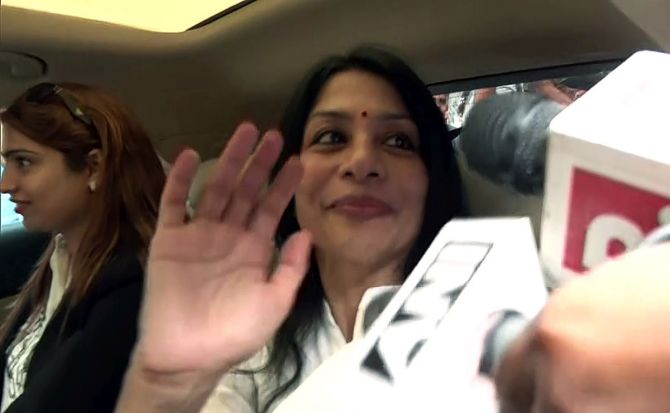 IMAGE: Indrani Mukherjea speaks to the media after she was granted bail by the special CBI court last month. Photograph: ANI Photo

On those two days, in Courtroom No 51, three Sheena Boras came alive; wispy shadows walking in a room filled with the living; three of whom are on trial for her murder.

Which Sheena Bora was real?

Was she an amalgamation of all three?

Why did Rahul Mukerjea believe she was in trouble?

Why did Peter and Indrani Mukerjea -- then married, now divorced; one, the father of the witness on the stand; the other, the mother alleged to have murdered the victim, her daughter -- want Rahul to believe that Sheena was "fine" and had "moved on".

"You should not be overly concerned about her well-being at this point," Peter tells Rahul in conversation 11. "She will come back soon. She wants you to carry on.

He once again impresses on Rahul that then Mumbai police Crime Branch head Deven Bharti -- whom Peter had approached in a non-official capacity for advice on the disappearance, and who advised them not to file a missing person's complaint -- is a senior police officer. "I'm pretty convinced he put all the dots together."

And later, "Sheena seems to be worried that you will chase her. Go to Rishikesh. Spend 10 days there. You'll feel good. You'll get a perspective."

Rahul tells him, "She's a sweet girl. There's been no word from her. If she has different plans, it's okay. It's just preying on my mind. I'm not trying to 'get' anyone. I'm just trying to find out what going on with her.

Indrani replies, "At this point am not really worried. If she contacts anyone, they should tell her to put in her resignation."

In the next conversation, she adds, "(It doesn't matter) Whether it's me, Papa or Mikhail that she calls. We can't force her to talk to Rahul."

She also talks about how irresponsible Sheena was. "I had asked her to send her education documents to me so that I could help with her MBA, but she never did."

Though Rahul did seem, at times, to believe Sheena had moved on, he didn't stop searching. He asked his father for the name of the hotel Indrani was staying at in Kolkata. "I wanted to call the Tollygunge Club and find out if Sheena had been with Indrani when she had checked in there."

He also tells the court, "I told Papa and Indrani that I doubted all the messages sent to me from Sheena's phone on 24th night and 25th morning."

Peter, in trying to convince Rahul in conversation 12 that Sheena is fine, tells him, "The last person who finds out is the partner. If I am having an affair, I don't expect my friends to tell my wife. People are married for 20 years and don't know about their spouse having an affair. It all depends on how trusting one partner is and how smart the other one is. I know what you are like and I know what Sheena is like."

"Her boss knows her," says Rahul. "He's worried. I'm worried. You are giving me all the possible scenarios but are not accepting that they are all uncharacteristic of Sheena.

"I've shown the boss all the messages, including the ones I don't think are from Sheena. He thinks the same."

Indrani adds, "I'm absolutely sure she will call someone. Like Peter says, she's done a number. I don't have a bad feeling in my heart about this."

In conversation 20, Peter again counsels Rahul. "I think she does not want to talk to you at least at the moment."

He suggests that Rahul should relax and watch Vicky Donor. "Shoojit Sircar's really good director. Sent him a message."

Once again, as in almost every hearing in this case there are so many unanswered questions.

If an employee with a good track record does not come into work for a few days, would the organisation make an effort to find her or ask for a resignation?

Can the head of the crime branch, at the request of a friend, use official resources to trace a person who hasn't been reported missing?

Why has the transcript of the recordings not been provided to the defence?

What would Sheena Bora, who defied her mother to first move in with and then get engaged to Rahul Mukerjea -- and, if Rahul is to be believed were considering getting married -- break up with him through a cryptic text message after she disappeared?

Assuming she did do so, why would she want her mother -- whom she had met two years after an acrimonious parting and who, according to Indrani, was only interested in the financial help Indrani could give her -- want her to meet a potential new boyfriend?

How did two guys -- the Bentley owner from Nagpur and Nishant Khurana from Delhi -- both pitched as Sheena's boyfriends, pop into the picture?

If Sheena had told Indrani she had to get back to Amarsons by 9.15 pm, why did she send Rahul a message that she was going to stay overnight with Indrani?

And then, there are the recording themselves. Rahul knew he was recording. Did Peter and Indrani know they were being recorded?

Does that not give the person doing the recording an unfair advantage over the persons who are being recorded?

With hindsight, do recordings lose their contextual reference? Do we spot guilt, or innocence, where it may not exist?

Indrani throws out multiple stories -- from the Nagpur guy, to the Delhi guy, to Sheena's studying in the US, to Sheena being a moneygrubber, to Sheena escaping from Rahul because their relationship was acrimonious. Which story is real? Are any of them real?

Why did Indrani and Peter try so hard to convince Rahul that Sheena was fine? What made them so confident?

In one of the recorded conversations, Indrani instructs Rahul to not take any calls regarding Sheena and to ask them to call her or Peter instead. Why?

And the most important question of them all...

Who is Sheena Bora?

The dedicated employee her boss knew?

The heartless moneygrubber who dumped Rahul for a richer boyfriend, as seen through Peter's eyes?

The conniving, greed, selfish Sheena as painted by Indrani?

The living will do anything to save their lives.

The dead can't defend themselves.

Post script: Indrani is insistent about cross-examining Rahul herself. It is clear that there is no love lost between the two. And, when asked by the judge if she will take one day to cross-examine Rahul, Indrani replies, "Oh, much more than that. At least seven days."

The judge will rule on her appeal on Tuesday, June 28. 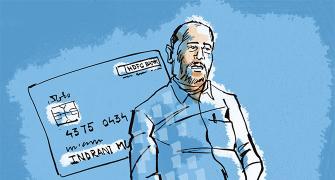