News
Business
Movies
Sports
Cricket
Get Ahead
Money Tips
Shopping
Sign in  |  Create a Rediffmail account
Rediff.com  » News » Revenge may win you an election. But will it deter your enemy?

'The travesty of recent Indian strategic thought is it emerges not from our brains, but from whatever part of the anatomy that secretes the prickliest hormones,' says Shekhar Gupta. 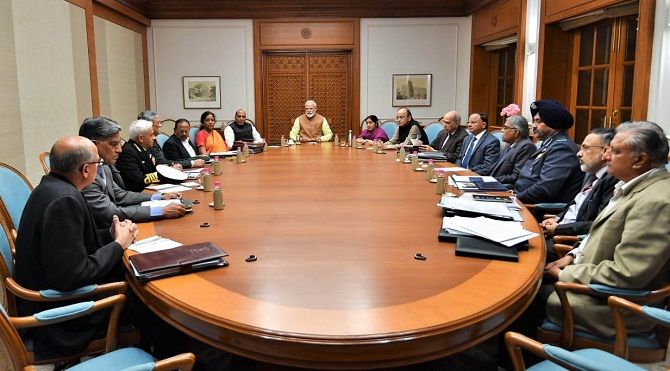 Revenge is the immediate call after a terror attack with Pakistani fingerprints. In a couple of days, sanity tip-toes back into public debate. Inevitably then appears that phrase: Revenge is a dish best served cold. And Afghans are credited with having invented it.

Never mind that Phrase-Finder tells me that the French said this first, at the turn of the 18th century. But it's just that it fits the Afghans more. Because vengeance is essential to their lifestyle, usually lasting generations.

How good are they at it? Don't bother reading tribal history or Rudyard Kipling. Ask the Soviets, the Americans and the Pakistanis. You mess with the Afghans, you will get the payback.

Yet, look at the state of Afghanistan. For all its old conquests and loot of India's riches and defeat of two superpowers, it is a hopelessly broken, poor, near-medieval and ungovernable disaster.

It is probably human history's most perennial loser. Lesson: Revenge, served hot or cold, may be a delightful dish to eat. But it does nothing for you, besides momentarily satisfying your blood-lust.

A nation driven by revenge is more likely to self-destruct than win.

Obama killed Osama bin Laden, by that time an inconsequential ailing old exile, and it did nothing to discourage new Islamic terrorists.

Pakistan has worked on a multi-generation project to avenge 1971 and destroyed its economy, society and polity in the process.

The side that wins, on the other hand, is one that prefers 'deterrence' to revenge. '

The travesty of recent Indian strategic thought is it emerges not from our brains, but from whatever part of the anatomy that secretes the prickliest hormones.

Revenge is a mere emotion, and for idiots. Deterrence grows over time from grey matter in the heads of wise people.

Take, for example, the surgical strikes after the Uri attack. It became an end in itself. They killed 19 of ours, we killed many more of theirs. Khoon ka badla khoon.

Sure enough, they were at our throats again in Pulwama. There is clamour for revenge again.

Prime Minister Narendra Damodardas Modi promises retribution for 'each one of your tears'. The commentariat agrees that something definitely needs to be done soon.

The less nutty ones also say revenge is good. But not just now. Take your time. As the Afghans say...

Here is a question:

What comes after revenge? Will it buy you durable peace and security, or just be a great headline, an event and maybe a movie later?

It may even win you an election. But will it deter your enemy?

Kautilya is much in fashion these days, so let's take this argument forward using his wisdom.

We don't have to read the Arthashastra. Just the most familiar folklore about Kautilya will do. When his dhoti got caught in a thorny bush and was torn, he did not go looking for a chopper to cut it down.

He took his time, returned with a pitcher of sweetened milk and poured it into the roots of the offending plant.

When a curious Chandragupta asked him why, he said, if I cut it, it will grow from its roots again. But sweetened milk will attract millions of ants. They will eat up the roots and finish this problem for ever.

The scythe option would have been revenge. The sweetened milk is deterrence. It isn't sexy. It's brutal. It's Kautilyan.

We can similarly examine our own strategic history.

China's 1962 invasion was not to punish India, take revenge or grab territory. It was to create deterrence.

It ended India's 'Forward Policy', placed red lines on our Tibetan dalliance and pushed generations of Indian strategists into a defensive mindset, mentally fighting the same old war of 1962 to protect our territory.

That message delivered, the Chinese built Pakistan into a worthy client. For five decades now they have brilliantly used a smaller neighbour (Pakistan) to balance a much larger India.

This is classical, low-cost deterrence.

In 1971 Indira Gandhi employed her version of the Arthashastra. She waited for nine months to build sufficient military and diplomatic edge, instead of playing to public opinion and jumping in when West Pakistanis cracked down in March.

She built up the military, signed a treaty with the Soviets to balance America and China, went around the world building opprobrium against Pakistani excesses.

She strangled Pakistan so patiently that finally Yahya Khan could take it no longer and began the war in December.

Did this deter Pakistan from further adventurism? It will soon be 50 years since. And never has Pakistan even dreamed of using its military to wrest Kashmir again.

On the other hand, from the late 1980s, it switched to terror and low-intensity conflict, with expendable proxies.

You can take revenge on them, the Pakistanis won't bother.

You strike their military, they threaten retaliation.

In the process, we get angrier, vengeful and frustrated.

Pakistan continues, believing that both -- the nuclear weapons and insufficient asymmetry in conventional strength -- deter a more decisive Indian response.

Before we navigate a way out of this hole, we should understand what got us here. Here is my three-point diagnosis:

It is old wisdom that the loser learns more than the winner. Indian leaders misread 1971 as the permanent end of Pakistani threat. Zulfiqar Ali Bhutto, on the contrary, accepted Pakistan had to give up the conventional military option forever.

But to deny it to India, he launched his nuclear quest. By the early 1980s, his successor felt secure enough with this nuclear hedge to begin mischief, first in Punjab, then Kashmir.

The nuclear tests of 1998 brought in the nuclear balance. It made Pakistan adventurous, while India braced the idea that with nuclearisation, the conventional option was gone.

I would go so far as to say the Indian strategic community became 'nuclear-lazy'. It forgot that weapons of mass destruction are the likely loser's last resort.

The Pakistanis were smarter.

As a result, India lost interest in building greater conventional asymmetry though its economy boomed. India forgot that an overwhelming conventional superiority will give it punitive strength, deter Pakistan from a military riposte, and defy it to weigh nuclear self-destruction.

That would have made Pakistan think again before blowing up buses here.

This nuclear laziness led to declining Indian defence budgets as a percentage of GDP.

The last time India made a quantum jump was under Rajiv Gandhi when the budget crossed 4 per cent of GDP. Since then, it has declined.

As a result, if a war were to break out now, a lot of our frontline hardware would have been what Rajiv ordered: More than three decades ago. Why spend more if the nukes had ruled out any war?

See how this brain-washing also bedevilled the Modi government despite its tall claims on national security.

It kept its promise of implementing one rank one pension, implemented the 7th Pay Commission recommendation, but kept reducing the defence budget as a percentage of GDP.

Additional wages and pensions, therefore, came out of modernisation.

That's where we stand now -- very capable of defending ourselves, taking some tactical revenge here and there, but not dissuading Pakistan.

How do we go forward? Stop thinking of Pakistani nukes as a deterrent for us, build your militaries massively, challenge the adversary with its doddering economy to match up and pauperise itself (the Chinese give nothing for free), and build a new deterrence: Old-fashioned conventional military power.

This, in my book, is the equivalent of Kautilya's sweetened milk doctrine. It is boring, needs patience and time, but will work.

But then, Kautilya didn't have the compulsion to get Chandragupta to win the next election. 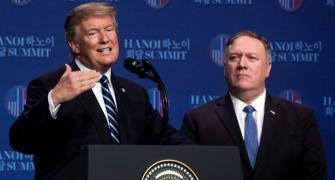 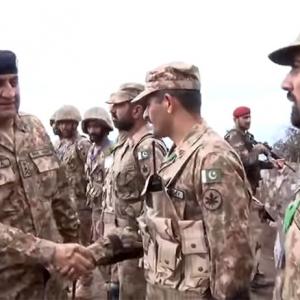