Cities, roads, stations rechristened in the time of Modi. Hoshangabad in Madhya Pradesh is the latest city to be renamed.

Madhya Pradesh Chief Minister Shivraj Singh Chouhan has announced that Hoshangabad city would be renamed Narmadapuram and a proposal to that effect would be sent to the Centre.

Renaming of cities in India is nothing new.

The first major city to be renamed was Bombay, which the Shiv Sena-Bharatiya Janata Party government that came to power in Maharashtra in 1995 changed to Mumbai.

But the momentum of renaming cities, places and things has ibncreased ever since Narendra Damodardas Modi won the 2014 general election.

Some of it was done to 'erase the memories of Islamic and British rule', which Modi has often termed as 'slavery of a 1,000 years'.

Syed Firdaus Ashraf/Rediff.com some of the notable name changes done in Modi's India.

Gujarat Chief Minister Vijay Rupani has gone where no other ruler has gone before when he decided to change the name of a fruit.

Dragon fruit, he declared recently, will henceforth be called 'Kamalam', which means lotus in Sanskrit.

In Rupani's opinion, 'Dragon fruit is not the proper name as it reminds you of China and, secondly, many farmers told me that it looks like a lotus. Therefore, the new name.'

You really need dragon eyes to see a lotus in the said fruit, but since it is also the BJP's election symbol argument on this front is specious.

It stemmed from the philosophy of Jan Sangh ideologue Deendayal Upadhyaya who had propounded Ekatma Manavvad (Integral Humanism).

RCR was finally changed to Lok Kalyan (public welfare) Marg. Get the message?

Maheish Girri, the BJP MP from East Delhi, felt that 'Aurangzeb Road' reminded one of the Mughal emperor's tyranny.

He wrote to the PM and Delhi CM, 'emphasising the cruelty of Aurangzeb' and asked that the government 'correct the mistakes made in history'.

Given the affection commanded by the beloved former President, nobody objected to the change.

In 2017, the BJP won a landslide victory in the Uttar Pradesh assembly election.

Ajay Mohan Bisht aka Yogi Adityanath, the new UP chief minister, wanted to 'erase the Islamic past' of his state.

One of his priorities was to change the name of Mughalsarai railway station, which became Deendayal Upadhyaya junction.

Upadhyaya, then the Jan Sangh president, was found murdered at the railway station in 1968.

'The holy city of Prayagraj remained where it was and still is,' Professor Faruqui wrote in an Indian Express article (external link).

During the British Raj, Ilhabas got corrupted to Allahabad; it had nothing to do with Allah.

Next in line was Faizabad whose name was changed to Ayodhya.

Khattar's logic? According to him, the original name of the city was Gurugram since the times of Guru Dronacharya, the teacher of the Pandavas in the epic Mahabharata.

It was here in Gurugram, according to Khattar, where princes in ancient India received their education.

When the country was under lockdown and all economic activity was halted, the Union Cabinet took an important decision in June 2020 -- to rename Kolkata port.

It was renamed after Dr Syama Prasad Mookerjee, founder of the Bharatiya Jan Sangh.

The Cabinet stated the Kolkata port's board of trustees had taken a decision to rename it in February 2020 itself.

A month prior to that, on January 12, 2020, while celebrating 150 years of the port, the decision to rename it was made public.

The Modi government wants to change the name of THE Rajiv Gandhi Centre for Biotechnology in Thiruvananthapuram to Sri Guruji Madhav Sadashiv Golwalkar National Centre for Complex Disease in Cancer and Viral Infection.

This has created a furore in the Communist Party of India (Marxist)-led government in Kerala, which said if the Centre wants to change the name it could change the name to any eminent Indian scientist, but not Golwalkar who had made no contribution to the state.

Golwalkar was the second and longest-serving sarsanghchalak of the Rashtriya Swayamsevak Sangh.

Asked Congress MP from Thiruvananthapuram Shashi Tharoor, 'What is MSG's contribution to science other than promoting disease of communalism?' 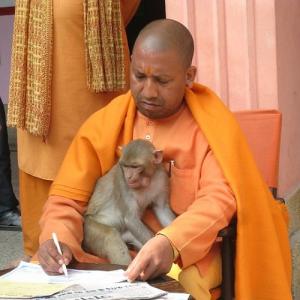