'Modi has become confident enough not only to look forward to a second term in 2019, but also to celebrate the 75th year of India's Independence in 2022.'
'It will be in the fitness of things if the vestiges of the past are swept away and the country is reminded that the 1,200 years of 'slavery' under the Muslims and the British were a bad dream.'
'And what better way to achieve this objective than by rubbing out the names of the invaders?' says Amulya Ganguli.
Illustration: Uttam Ghosh/Rediff.com 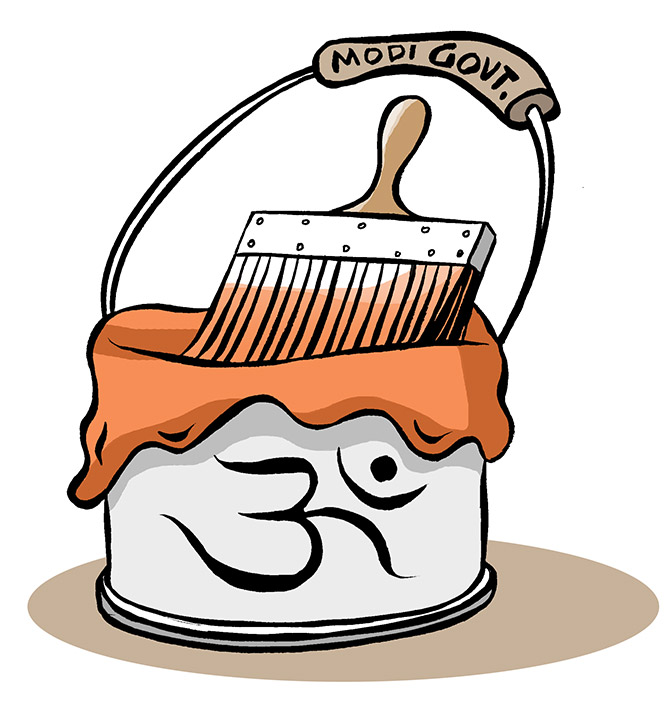 It was only a question of time.

After the renaming of Aurangzeb Road in Lutyens' Delhi -- although an Aurangzeb Lane has avoided detection from the Hindutva votaries -- Mughalsarai was living on borrowed time.

The railway station and town is doubly damned.

First, it recalls the name of a group of invaders and, secondly, it uses one of their alien words to denote a bhojanalaya or an eatery.

There is no way, therefore, for it to survive in its present form at a time when 'nation first' governments are in power, both at the Centre and in Lucknow.

Hence, the suggestion from the Yogi Adityanath administration to the Union home ministry to rename it after the RSS ideologue Deen Dayal Upadhyay who was even less well known -- outside the saffron brotherhood -- than Savarkar and Golwalkar.

Now, in the 100th year of his birth, he will have a widely known railway station named after him because, as a Union home ministry official has helpfully explained, 'the main objective seems to be to remove the word, Mughal, from the name.'

Once this shuddhikaran or purifying process is done, perhaps the Modi government can turn to some other names with Muslim connotations.

One of them is at the heart of Lutyens' Delhi -- the Mughal Gardens in Rashtrapati Bhavan.

When the new President moves into his new spacious residence, it will be odd for him to host receptions at a venue which is a reminder of the invaders.

Considering Golwalkar said that the framers of the Constitution made a mistake in equating the children of the soil with the children of the invaders in the matter of civil liberties, a section in the new dispensation may well think of giving a new name to the green expanse behind Rashtrapati Bhavan -- perhaps Golwalkar Gardens.

There are more such reminders of the aliens which need to be done away with, especially the one in Modi's former fiefdom of Gujarat -- Ahmedabad.

Named after Ahmed Shah in 1411, the town was formerly known as Karnavati, a name which is sought to be revived.

The RSS has let it be known that it is in favour of the new name for Ahmedabad just as it is for Hyderabad, for which it has suggested Bhagyanagar after the goddess Bhatyalakshmi and, for Aurangabad, Sambhajinagar after Shivaji's eldest son.

There is also a proposal to rename Allahabad as Prayag.

It is not that the RSS-BJP wants only Muslim names to be erased.

The Dalhousie Road near Rashtrapati Bhavan has been named after Dara Shikoh, Aurangzeb's ill-fated elder brother, who was well versed in Hindu lore and translated the Upanishads into Persian.

However, the views expressed in his book, Majma-ul-Bahrain or The Confluence of the Two Seas, which saw a mystical and pluralistic affinity between Sufi and Vedantic traditions, can be regarded as the forerunner of the present-day secular 'Idea of India' which is anathema to the Hindutva lobby.

The sole reason for Dara Shikoh's high status in the saffron camp is his enmity with Aurangzeb, the RSS-BJP's bête noire.

An enemy of an enemy is a friend.

Modi has become confident enough not only to look forward to a second term in 2019, but also to celebrate the 75th year of India's Independence in 2022.

It will be in the fitness of things, therefore, if the vestiges of the past are swept away and the country is reminded that the 1,200 years of 'slavery' under the Muslims and the British were a bad dream.

And what better way to achieve this objective than by rubbing out the names of the invaders?

The task was begun by the Congress which did away with the names of Curzon, Connaught and others. But it didn't touch the Muslim names because of the party's dependence on minority votes.

The BJP has no such compulsions.

As Union minister Ravi Shankar Prasad has said, the BJP gave 'proper sanctity' to the Muslims although it did not get their votes.

The sanctity does not extend, however, to history books where, according to saffronites, Maharana Pratap should be called Great and not Akbar, or to road signs if they recall an inglorious past.