'Notwithstanding the realisation among the Indian leadership to build up its navy for the force's expanding role, the Indian Navy was allocated only 15% of the interim defence budget presented in Parliament in February 2019.'
'The outlay for the navy's capital acquisition is not even adequate to meet its committed liabilities,' points out Brigadier S K Chatterji (retd). 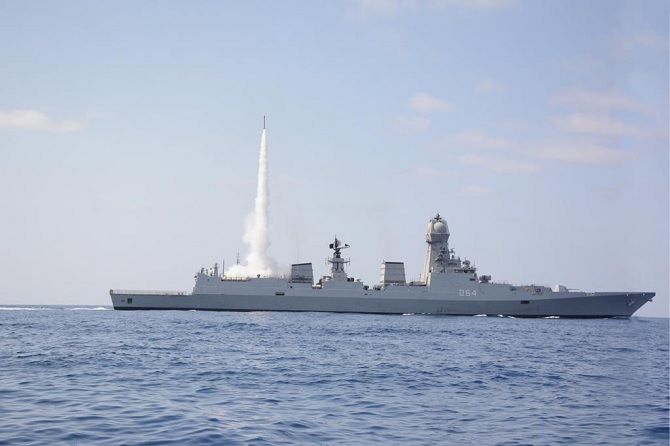 IMAGE: The Indian Navy achieved a significant milestone in enhancing its Anti Air Warfare Capability with the firing of the Medium Range Surface to Air Missile. Photograph: ANI Photo

Over the ages, Indians have faced repeated assaults from across the mountains to its north. Though the ingresses from the seas to the south have been of historical consequences too, those from the north have been far more recurring a feature of Indian history.

It has led to the Indian strategic focus being more oriented to its land borders.

In 1947, when the country won its independence, India correctly anticipated the probability of Pakistan intervening in Kashmir. Soon enough, thousands of local tribals, supported by the Pakistan army, advanced in droves into Jammu and Kashmir that had signed to join the new Indian Republic.

The attacks were soon blunted and rolled back to areas in close proximity to the Line of Control, as defined today.

Even as the guns fell silent, the war left a deep impression in the Indian psyche.

Pakistan came to be identified as the immediate and most potent threat.

With the gradual withdrawal of European powers from the Indian Ocean Region (IOR), and hardly an IOR country that possessed a formidable navy, the wide expanse of sea waters to the south, southeast and southwest, were even viewed as a natural defence for Indian shores.

At Independence, India was in search of the right combination for a balanced growth of the three services. The Indian government policy was oriented to having an army that would be a more compact force, with its strength curtailed.

A 10 year expansion plan was worked out for the navy. It was to have a fleet each for the Bay of Bengal and the Arabian Sea.

The objectives were to play a primarily defensive, and, if required a limited offensive role in the Indian Ocean.

A light fleet carrier for each fleet, along with light cruisers, destroyers and necessary support vessels were also part of the plans.

When Pakistan joined SEATO -- later CENTO -- during the Cold War, India went in for major acquisitions with the air force given the priority in purchases. The army's share of the budget came down to 55%, and those of the air force and navy increased to 28% and 11% respectively.

Over the next few years, the need to consolidate maritime assets led to Fortress Command Andaman Nicobar being established by India on its island territories. In addition to naval assets, a battalion was positioned.

The vulnerability of its land borders was reinforced by the Sino-Indian conflict of 1962. It was a humiliating scar that still continues to ooze. It further anchored the primacy in focus on its land borders.

Neither air power nor naval elements were used in the 1962 conflict with both countries restricting the battle to the use of their armies alone. The humiliation lead to a steep spike in the army's budget.

The legacy of wars along the Indian borders continued. The country again fought a war with Pakistan in 1965. The Bangladesh War of 1971 proved a decisive victory for India with a new State being carved out of East Pakistan provinces.

The result almost eliminated a tangible threat of a military assault on India's eastern borders through erstwhile East Pakistan.

The 1971 War also witnessed the successful employment of the Indian Navy bringing it into the war rooms as a decisive instrument of war for the nation's strategic objectives.

PNS Ghazi, a Pakistan submarine, was sunk off the Indian coast. The Indian Navy attacked the Pakistani port of Karachi in a very successful operation. The only Indian aircraft carrier INS Vikrant was utilised for the naval blockade of East Pakistan.

The realisation in the Indian establishment of the threat from the sea is perceptible in the years ahead.

In 1990, Fortress Command Andaman Nicobar was provided a brigade. The Indian Navy's allocation also increased to 14% by 1989-1990.

By the mid-1990s the Indian Navy had 100 combat ships to include 15 submarines, two aircraft carriers and 23 destroyers/fast frigates.

By 1996, substantial air force elements were also inducted as part of the Fortress Command.

Well before the turn of the century, India had acquired enough military potential to blunt a Chinese offensive along its mountainous northern borders.

Notwithstanding the huge Chinese investments in infrastructure in Tibet, the Chinese are well aware that a deep penetration by them is no longer on the cards.

The Indian Navy had expanded to be the fifth largest in the world. The navy also embarked upon joint exercises with the Russians, the Americans and IOR littorals.

By September, 2001 Fortress Andaman and Nicobar had been upgraded to India's first joint services command.

In 2003, the Indian government's Defence Acquisition Council approved the navy's 10 year plans to add 23 battle ships. However, an alarming percentage of the fleet was on the fringes of being retired.

The navy was definitely crying for more funds and by 2013-2014, was allocated approximately 18% of the defence budget.

One of the primary reasons for the Indian threat perception swiveling seawards was the growing maritime dimension of the Chinese threat. China has enjoyed a hugely smooth sail as it has pushed the envelope in the South China Sea (SCS).

IOR countries and the US have all but looked the other way as islands have been converted to powerful outposts by the Chinese. Success in the SCS stokes its ambitions in the IOR and leads to apprehensions in India and IOR countries.

The increasing Indian focus on the IOR was articulated by then prime minister Manmohan Singh during his address at the central party school in China in October 2013.

'Maritime security in the Pacific and Indian Oceans are vital for our economies just as peace and stability in the West Asia and Gulf are essential for our energy security,' Dr Singh said.

The Indian response to the diminishing stability in the IOR has three major prongs.

The first one being to build its own navy, the next to develop relationships with IOR States, sharing infrastructural and logistics support.

The last prong is inter-operability with major regional and extra regional powers in the IOR.

For amphibious operations it has a sea lift capability of 3,500 troops and a squadron of tanks. It has 13 submarines with six more in various stages of construction and operationalisation.

The Arihant, a nuclear powered submarine, provides India the sea leg of its triad capability.

One Russian nuclear powered submarine is on lease with the navy.

In terms of surface platforms, it has 24 destroyers/frigates along with a host of other surface vehicles.

It flies 21 squadrons to include fixed, rotary wing and UAVs.

The Chinese have the second largest navy in the world with 11 nuclear submarines, close to 60 conventional submarines, one aircraft carrier with two more under construction, 28 destroyers and 46 frigates.

Developing relationships with the IOR States, the second prong of the Indian approach is evidenced by the Indian Act East and Neighbourhood First policies.

Among the more tangible Indian gains have been arrangements for logistics support with Singapore at Chhangi Port, logistics arrangements at Sabang Port, Indonesia, possibility of building a port in the Seychelles.

Vietnam may also provide facilities at Camh Ran Bay; not necessarily operational. Further west, India is building the Iranian port of Chabahar and has an agreement for Duqm port in the UAE.

As far as the third prong is concerned, India's relationship with major powers operating in the Indian Ocean is surely riding an upward curve. Its pivotal role in the Indo-Pacific is acknowledged by the USA. The two countries have signed a slew of agreements.

Dialogue mechanisms are in place with Australia, Japan, and the US. India also has an agreement with France for logistics support.

At the IISS Shangri-La dialogue last year, Prime Minister Narendra Damodardas Modi's emphasis was on 'We should all have equal access as a right under international law to the use of common spaces on sea and in the air that would require freedom of navigation, unimpeded commerce and peaceful settlement of disputes in accordance with international law.'

India's Act East Policy, finding an alternative to the Chinese Belt and Road Initiative in conjunction with the US, Japan and IOR countries, Security and Growth for All in the Region (SAGAR) initiatives are a part of its concerted focus on the IOR that has gained primacy in the Indian calculus.

Notwithstanding the realisation among the Indian leadership to build up its navy for the force's expanding role, the Indian Navy was allocated only 15% of the interim defence budget presented in Parliament in February 2019. The outlay for the navy's capital acquisition is not even adequate to meet its committed liabilities.

What inspires hope is the naval chief's statement at the recent naval commanders conference at New Delhi, 'By 2050, we will also have 200 ships, 500 aircraft and be a world-class navy.'

The next decade is bound to witness the build-up of Indian strength seawards. The government has approved induction of 56 new ships and six submarines. India needs to further develop infrastructure in the Andaman and Nicobar Islands.

The coastal surveillance radar system that it has offered the Maldives, Myanmar, Thailand, Bangladesh and Indonesia needs early operationalisation. An older variant is already in use with the Seychelles, Mauritius and Sri Lanka. The information received would be consolidated at the International Fusion Centre located close to New Delhi.

India's focus shifting seawards as yet requires huge investments and time. However, to check the Chinese, the build-up in the IOR needs to be multilateral that has to further expand as a network of IOR States. Some IOR States are already under a Chinese shadow and bound in many cases by economic linkages that are critical for them.

A strong framework in the IOR needs to be a reality for them to cast their lot with India. The Quadrilateral of India, the US, Australia and Japan, and a trilateral mechanism between India, the US and Japan hold out hopes.