'Despite the current tension at Doklam, it is the Indian Ocean we need to worry about more,' says Nitin Pai. 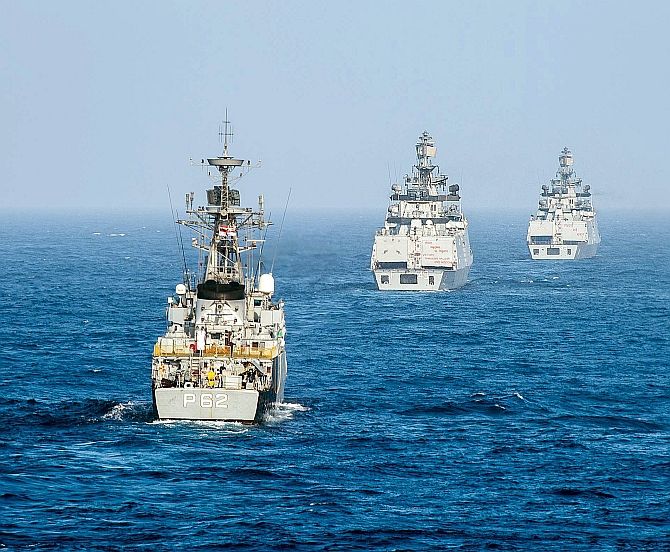 As complex as the standoff between Indian and Chinese troops at Doklam is, we in India have pre-existing mental models to process it.

The Indian government has been aware of the contest in the undemarcated Himalayas since the 1950s, the army has been conscious of it since the 1960s and there have been parliamentary and public debates on the matter since then.

We might not always agree on what needs to be done and we might have wrongly estimated Beijing's intentions, but India -- politicians, government officials and civil society -- know how to think about the Himalayan angle.

This is not to say there is consensus on what to do about it, but that we have some experience in dealing with it.

It's different when it comes to the Indian Ocean.

We do not know how to deal with Chinese power in the waters to our east, south and west.

Sure, a section of our establishment has been fretting over China's naval expansion and presence in the Indian Ocean region since the mid-2000s, but the debate did not get out of the confines of seminar halls.

Even within the strategic community, only a few individuals have developed coherent ways to conceptualise China's emerging role in the Indian Ocean and what it means for us.

The most common meme is the notion that China is creating a 'string of pearls' in the Indian Ocean to contain India. The fact is that the term originated from a report on energy security that Booz Allen Hamilton, a consultancy prepared for Donald Rumsfeld's Pentagon.

Far from containing India, it was a metaphor for a series of footholds and political relationships China was investing in to secure the sea lanes of communications (SLOCs) through which it imported fuel from the Gulf region.

That we appropriated it and unquestioningly cite it in serious discussions on maritime strategy is just another symptom of our poverty of thought.

Despite the current tension at Doklam and the risk of escalation on the Himalayan land frontier, it is the Indian Ocean we need to worry about more.

In a few short years, China has built up naval capacity, bases and relationships the Indian Ocean Region, and is poised to become its pre-eminent maritime power.

To achieve this it will rub against the Indian and the US navies. This has already started -- the Indian Navy is tracking far more People's Liberation Army navy ships and submarines in our vicinity.

The coming decade is likely to witness unprecedented situations as the two navies run into each other more frequently in India’s neighbourhood.

Unlike the Western Pacific, China does not have 'core interests' in the form of territorial claims in the Indian Ocean.

At least not yet, as we can never say when an 'old' map will surface and some new dashed lines will be drawn on them.

So what might be China's strategic objectives for wanting to dominate the Indian Ocean?

First, a permanent presence in the Indian Ocean insures China against containment by the US and its East Asian allies.

If PLA navy ships have to sail West Asia or East Africa from their home ports on China's seaboard, they face long voyages through chokepoints that are vulnerable to the navies of the US and its allies.

That's why China needs foreign military bases: Ships, aircraft and troops that China stations in these bases permit faster regional deployment and are not vulnerable to interdiction by its East Asian adversaries.

The recently inaugurated military base in Djibouti and control of Gwadar (Pakistan) and Hambantota (Sri Lanka) ports allow the PLA navy to maintain a permanent presence in the Indian Ocean.

Second, without 'command of the seas' China cannot be the superpower it aims to be.

It needs the ability to prevail over any country that might challenge its political aims -- including influencing domestic politics of the littoral States, intervening in regional conflicts and providing support to its allies.

Sea power is a crucial instrument to shape international order -- whether China wants to merely modify the extant one or establish a new one of its own design.

Third, sea lanes remain the channels of China's prosperity and are vital to its economic growth.

Political risks are rising in East Africa and West Asia and China needs to secure its trade and energy supplies from a growing number of threats.

There are others, but these are the three big reasons.

Competition with India is inevitable on the first two, and cooperation is possible on the third.

However, in the post-Doklam world, the idiom of India-China relations is likely to be one of cool contestation setting the stage for enduring rivalry in the maritime domain.

There are numerous implications for India, but one thing is clear: We need a bigger, stronger navy. I have consistently argued that we cannot manage Chinese power in our neighbourhood unless we project power in China's.

Even if New Delhi chooses to concentrate on the Indian Ocean, we can't do so without a significant revision to the Indian Navy's upgrade path.

Nitin Pai is the co-founder and director of Takshashila Institution, an independent centre for research and education in public policy.