The gun is unique in its ability to fire a five-round burst, while no other contemporary gun exceeds three-round bursts.
This brings down a greater quantity of explosive onto the target before enemy soldiers can take cover, reports Ajai Shukla. IMAGE: The ATAGS can fire without switching on the engine because of its all-electric drive. Photograph: PTI Photo

Until April, the Advanced Towed Artillery Gun System (ATAGS) was well on track to be inducted into service as an indigenous solution to the artillery's requirement of thousands of 155 millimetre (mm) guns.

In subsequent firing trials, the ATAGS demonstrated it was a world-class gun, consistently exceeding the ranges the army demanded.

The gun is unique in its ability to fire a five-round burst, while no other contemporary gun exceeds three-round bursts. This brings down a greater quantity of explosive onto the target before enemy soldiers can take cover.

Before entering large-scale production, the ATAGS was readying for hot weather trials in the Pokhran Field Firing Ranges from May 15 to June 15, followed by cold weather trials and mobility trials in Sikkim in January 2021.

Defence Research and Development Organisation scientists on the ATAGS project were confident. The gun had already performed well in high altitude trials in January 2018 at the 12,000-foot-high Menla Firing Range in Sikkim, where night time temperatures drop to minus 16 degrees centigrade.

But their hopes of a smooth path into operational service for ATAGS were scuttled by two events.

First, summer trials were called off because of the pandemic. Then, during the trials in September, a gun barrel burst while being fired.

Now, after a detailed probe by a multi-agency Failure Investigation Committee, the gun has undergone changes and is ready to fire again.

ATAGS Project Manager Shailendra Gade at the Armament R&D Establishment in Pune explains that the gun's ability to achieve a world-record breaking range of 48 km comes from a specially designed chamber that has a unique 25 litre capacity.

In other contemporary 155 mm guns, chamber capacity is never more than 23 litres.

As a consequence, other guns can use a maximum of six modules (measures) of propellant to hurl the projectile to the target.

The ATAGS's additional two-litre chamber capacity has space for a seventh propellant module. This hurls the projectile an additional distance.

Looking at the ATAGS in the ARDE's weapons bays is enough to discern that it is an unusually beefy artillery gun. Weighing in at 19 tonnes, it is a full two tonnes heavier than comparable 155 mm, 52-calibre Nexter and Elbit towed guns the artillery has evaluated.

But the army has willingly accepted the reduced mobility that comes with greater weight. The additional propellant it fires requires a heavier barrel, breech and recoil system.

The weight of the ATAGS has also risen because of its all-electric drive -- another unique feature of the gun. This electrically powers 11 moving parts, such as the automatic ammunition loader.

In other guns, these systems are operated through hydraulic systems, which are messy and unreliable, require hydraulic drives, oil tanks for hydraulic fluid and rubber gaskets that have to be changed frequently. Hydraulic systems also require more maintenance than electrical systems and are less sensitive.

Electrical systems have added an estimated two tonnes to the weight of ATAGS because an extra actuator and motor is required for each of the 11 moving parts. The ATAGS's stack of electrical batteries also adds to the weight of the gun.

Another advantage of electrical systems is that the gun can fire without switching on the engines -- essential for powering hydraulic systems.

In the ATAGS, the gun can fire in 'silent mode', with the batteries providing sufficient electrical power to fire it for an hour, without the engine running.

The ATAGS is towed by the standard, in-service Ashok Leyland Stallion field artillery tractor. However, it can be decoupled from the gun, and then move for short distances powered by its on-board engine, built by Pune-based firm, Cummins.

The ATAGS has a world-class, digital control and communications system. Each battery command post issues commands to the six guns it controls through state-of-the-art software defined radio.

The command & control and communications systems have been developed by two DRDO laboratories: Defence Electronics Application Laboratory, Dehradun and the Centre for Artificial Intelligence and Robotics, Bengaluru.

There is significant 'Make in India' prestige riding on the ATAGS. It has been displayed to the public during the Republic Day parade. Numerous VIPs have witnessed it firing, including Nirmala Sitharaman who travelled to Pokhran in September 2017 two weeks after taking over as defence minister.

But, most importantly, the ATAGS has a major place in the army's Field Artillery Rationalisation Plan, which envisages the acquisition of about 3,000 155 mm, 52-calibre guns. At least half of these are to be ATAGS. 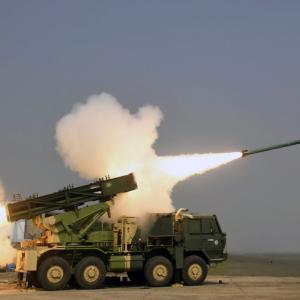