Kamala Harris -- California's Indian-American Senator -- has topped Foreign Policy magazine's 2017 list of '50 Leading Global Thinkers'.
'They are the doers who defined 2017,' Foreign Policy said.
Harris topped the list for giving the Democratic Party hope in the era of President Donald Trump, the magazine explained.
Kamala Harris could well be US President in 2020.
These badass moments show us why. 'Is Kamala Harris now the 2020 election favourite to take on Trump?'

'Kamala Harris is starting to make the right moves for 2020'

'Kamala Harris and Kirsten Gillibrand will lead Democrats to 2020 victory'

'How California could jolt the 2020 presidential race'

These are just a glimpse of the headlines that have popped up across publications like Politico, Newsweek, Huffington Post and The Hill in recent months.

Kamala Harris is the first Indian-American Senator in the United States -- and only the second black woman elected to the US Senate.

For the Democrats, she ticks a lot of boxes for the big race in 2020.

Even the electoral timing in her home state seems to be moving in her favour.

A few weeks ago, California lawmakers sent a bill to Governor Jerry Brown moving up the state's 2020 primaries by three months to March.

Noting Harris's rising stature 'thanks to her high-profile opposition to the White House during Congressional hearings,' Newsweek noted that the vote to change the primary dates gave Harris 'another boost in a presumptive bid for the Democratic nomination in the 2020 election.'

Moving California's primary to the beginning of March, 'right after Iowa, New Hampshire, Nevada and South Carolina on the calendar,' CNN explained, puts 'California's contest on Super Tuesday -- turning the date into a massive delegate haul that could effectively seal the Democratic presidential nomination.'

'Harris,' Newsweek added, 'as the most recognizable current probable nominee from California, may stand to benefit most.'

As the buzz around 'Kamala for 2020' grows, we look back at five times she was the kind of badass the world now needs. When she was California's 'top cop'

In 2010 Kamala Harris became the first woman, the first Indian-American and the first African-American to become California's attorney general, the top law enforcement office of America's most populous state. 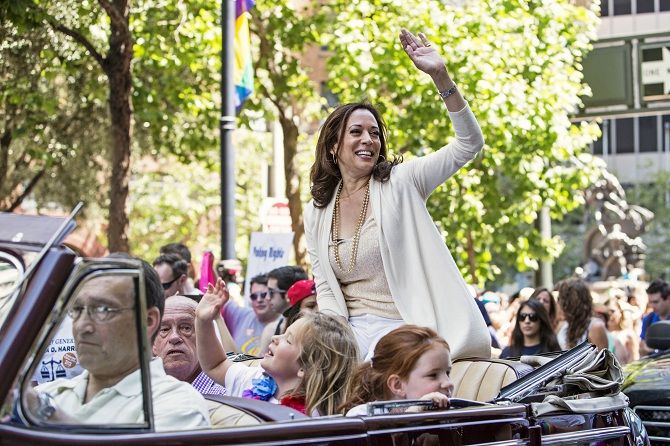 When she fought for marriage equality. And won.

As California's attorney general, Harris (pictured above at the San Francisco Pride Parade) refused to enforce Proposition 8, a voter-passed initiative that banned same-sex marriage in her state.

'I declined to defend Proposition 8 because it violates the Constitution,' Harris said when the Prop 8 case came before the Supreme Court of the United States in 2013.

'The time has come for this right to be afforded to every citizen.'

In 2015, Harris even called out Supreme Court Justice Antonin Scalia who was against the ruling legalising same-sex marriages, for singling out her state as an outlier.

'Justice Scalia has caused many people to question the dignity of the court when he makes statements such as the statements he's made in connection with this case,' she said. 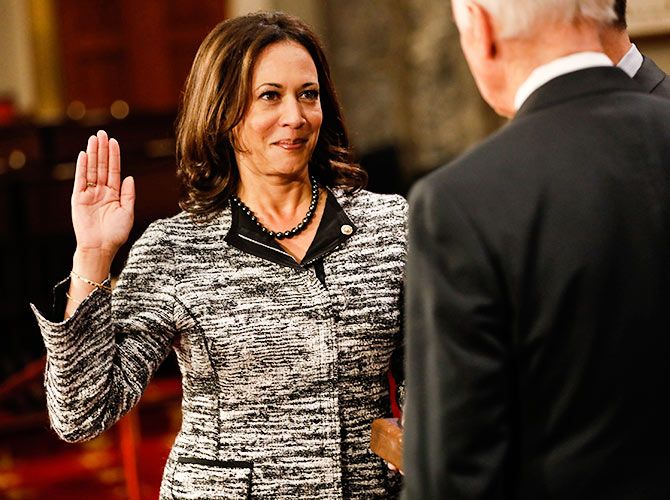 When she became a US Senator

No stranger to breaking barriers, she became the first Indian American elected to the US Senate and only the second black woman to do so -- with a landslide victory.

She told CQ Roll Call, 'My mother had a saying: "You may be the first to do many things, make sure you aren't the last." We need to work to ensure the leaders reflect the people they are supposed to represent, and until we achieve that full representation, I think we should understand we are falling short of the ideals of this country.'

In June, two white male Senators manterrupted Harris to prevent her from finishing her questions to Deputy Attorney General Rod Rosenstein at a Senate Intelligence Committee hearing on the Foreign Intelligence Surveillance Act, which impacts the ongoing investigation into possible Russian interference in the 2016 US presidential election.

The Cut noted that Harris is the only woman of colour on the committee and no other Senator was similarly interrupted or chastised.

It reminded the world of the #ShePersisted campaign that spontaneously unfolded earlier this year after another female US Senator was interrupted by a male colleague who said, 'She was warned. She was given an explanation. Nevertheless, she persisted.'

The exchange led to a viral video of her stare down and a letter from her team titled, 'They told me to be courteous…'

When she made the US attorney general 'nervous'

Harris's tough prosecutorial background was once again evident in her questioning of US Attorney General Jeff Sessions on June 13 at the Senate hearing on Russia and the Trump campaign.

When Sessions kept trying to stall and draw out his responses in the time-bound questioning and Harris would not let up the pressure, he finally said, 'I'm not able to be rushed this fast. It makes me nervous.'

She was once again interrupted -- the second manterruption in a week -- for her tough questioning, enraging many people.

Harris, the SF Gate wrote, is 'a fast-rising star increasingly adept at taking on, with a sly grin and without so much as a flinch, the old white male loutishness of Trump's toxic regime. And it's something to behold.'

Amid calls for Harris to run for President -- remember Obama was a one term US Senator when he ran for President and won -- SF Gate added, 'As a young, whip-smart, mixed-race female from the most populous, progressive and economically powerful state in the union, Kamala is nothing short of Trump's worst nightmare.' 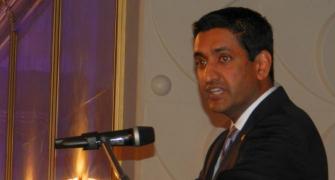 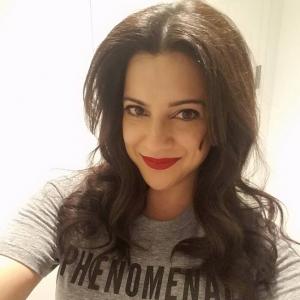 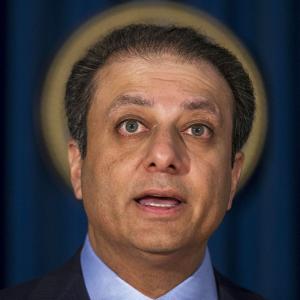