News
Business
Movies
Sports
Cricket
Get Ahead
Money Tips
Shopping
Sign in  |  Create a Rediffmail account
Rediff.com  » News » In the name of the cow: What motivates gau rakshaks?

'It's not only holy reverence that drives them to such vigilantism -- there is adventure too.'
'Some of the younger gau rakshaks enjoy the thrill of the chase: Stopping vehicles, wielding weapons, badgering passengers and then gloating.'
Dhruv Munjal reports. 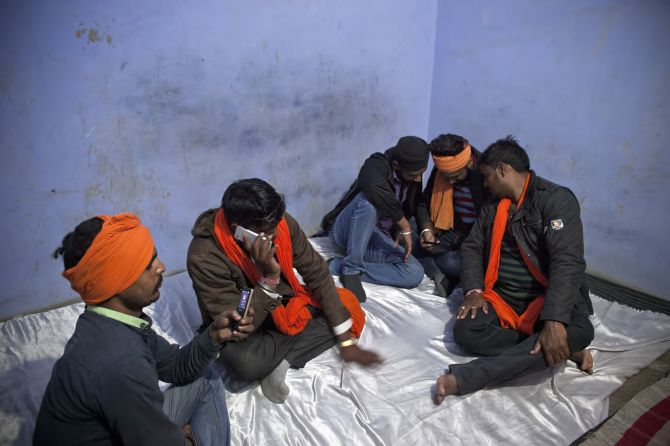 IMAGE: Gau rakshaks get tip-offs about possible cow smugglers in the area on their mobile phones. Photograph: Allison Joyce/Getty Images

"Do you see these bullet marks? I was driving that night."

At first glance, Dinesh Arya seems an unremarkable man. Dressed in a white dhoti-kurta, the light moustache and stubble fail to hide the wrinkles that have begun to form on his face.

Wrapped around his right wrist is a thick coil of red sacred thread, and he walks around with a swagger, often ordering others around him.

During the day, Arya performs the role of priest at Dayanand Math, a spiritual home located in the heart of Rohtak, Haryana.

As dusk falls, the 34 year old and his team of volunteers, mostly hulking men in their 20s, cram themselves in a rugged SUV and set off for the highway on gasht, or patrol.

They carry a small armory with themselves -- hockey sticks, baseball bats and licensed firearms -- to rescue cows from smugglers and traffickers.

"A couple of weeks ago, there was a gun battle that lasted two-and-a-half hours," says Arya, comfortable in the cool environs of his cluttered office.

On his desk, a bunch of new volunteer identity cards lies strewn. "We need to provide some identification to the police. They ask all sorts of questions. This helps our boys," he adds with nonchalance.

As general secretary of the Haryana Gau Raksha Dal, grisly street fights are routine for Arya and his zealots.

Mostly, they use a few indicators to nab traffickers: Low-riding vehicles, stench of cow urine and cars minus number plates and illuminated rear lights.

Arya talks about these things with stoical calm, not once does any fear show on his unruffled visage.

Often, confrontations with traffickers, who also roam around in groups and carry weapons of their own, end in grief.

Arya leads me to a spacious room inside the math whose walls are occupied by portraits of 'martyrs' who lost their lives in their attempts to save the cow. 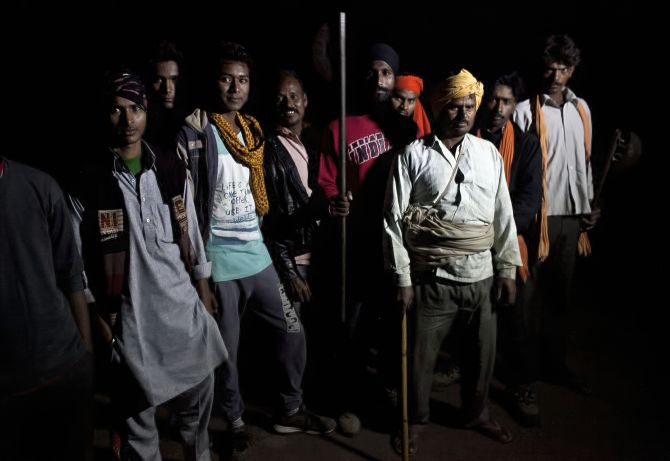 The Gau Raksha Dal of Rohtak is among the hundreds of self-styled cow-protection units operating across the country.

In the last year or so, they have become known not so much for their attempts at sheltering cows from 'savage' smugglers and meat traders but for their tendency to turn violent and target individuals without substantial proof.

The incident in Alwar in Rajasthan, where a Muslim dairy farmer was allegedly bludgeoned to death by a group of gau rakshaks, or cow protectors, is the most recent example of this vigilantism.

In Gujarat's Una last year, four Dalit men were beaten with iron rods by gau rakshaks for skinning a dead cow, a profession they had followed for many generations. The brutality was captured on video that went viral, drawing several alarmist reactions.

In fact, the Alwar episode has managed to spook some of these seemingly undaunted men.

"Par aap ko kaam kya hai? (What is it that you exactly need?)," asks Naveen Sharma furiously and repeatedly over the phone, his tone one of uncomfortable apprehension.

Sharma is national general secretary of the Bharatiya Gau Raksha Dal, an organisation that claims to have a presence in more than 20 states, and was founded by Pawan Pandit, a little-known software-engineer-turned-activist, a few years ago.

After much coaxing, Sharma agrees to a meeting in a somewhat deserted parking lot on the outskirts of Panchkula near Chandigarh.

Sporting a choti and tilak on his forehead, Sharma quickly moves into the rear seat. A 20-something volunteer-cum-driver pours out two glasses of Pepsi for us and exits the car. 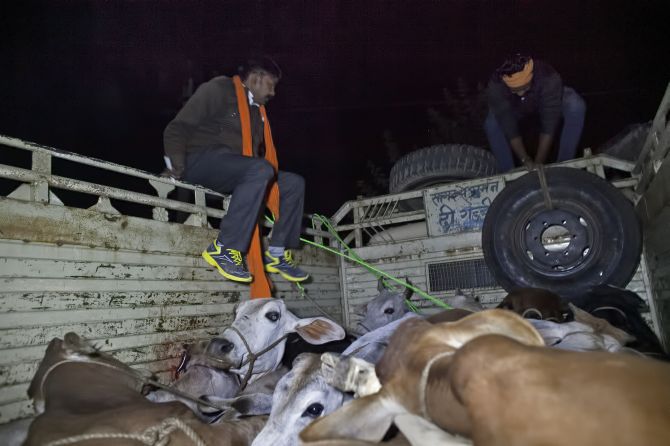 "We have 6,000 to 7,000 volunteers across the country," Sharma begins, "We don't believe in violence, and hit the streets only when we get a tip-off. The matter is then taken forward by the police."

The desire to save the cow, which is like a mother to devout Hindus, motivates youngsters to join such brigades in large numbers, seasoned gau rakshaks say.

Senjal Mehta, a 29-year-old scrap dealer from Rajkot, says that his religious belief and the sentiments attached to the cow drove him to join the Akhil Vishwa Gau Samvardhan Samiti and Bholebaba Gau Seva Samiti, two organisations that operate out of Saurashtra.

"“As a Hindu, the cow is holy for us and doing anything for it is virtuous for me. Preventing cow slaughter is my duty. I don't care what others think of me and what I do," says Mehta. He proudly declares that he beat up a man for harming a cow just a few days back. 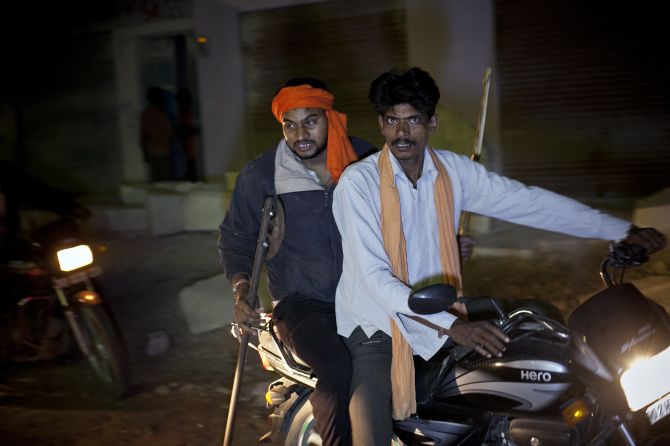 Across Haryana, Punjab and Gujarat thrives a fluidly linked network of gau rakshaks. Most of their chieftains know each other, information is swiftly transferred through WhatsApp and other forms of social media, and these groups are quick to help each other in an emergency.

Several of these organisations bear the same name, and affiliations are often intertwined.

Still, there are differences over the right approach. Surender Sharma, who runs his own gaushaala, located on a downhill stretch of the road that leads to Shimla from Panchkula, has been rescuing cows and rehabilitating them since 2005, but not in the sword-brandishing, slogan-shouting manner that now seems to have become the norm.

"There is nothing wrong in the intention, but there are certain elements that are erring in the execution. Violence is unacceptable," he says.

Sharma adds that to be a sevak, as so many of the gau rakshaks claim to be, one doesn't need the spotlight. "Some of these people do everything apart from saving the cow." 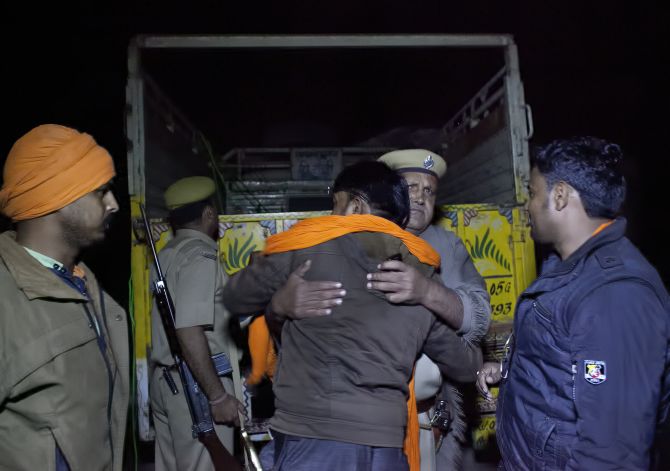 IMAGE: A policeman hugs a gau rakshak after the gau rakshaks chased down a truck that was smuggling cows in Ramgarh, Rajasthan. Photograph: Allison Joyce/Getty Images

Gau rakshaks in India have existed for several decades, but such organisations have mushroomed ever since the Bharatiya Janata Party swept to power at the Centre almost three years ago.

Old-timers such as Sharma say that fringe elements have now come to the fore.

There is outright denial to such accusations by the cow vigilantes. "We've been doing the same thing for the last so many years. Nothing has changed. There is perhaps a concerted effort to push us into the public glare for some political gain," says Arya.

The incidents in Alwar and Una, he adds, were politically motivated and did not involve any gau rakshak at all.

"Under Bhupinder Singh Hooda (of the Congress), there was greater support. He even spoke about equipping all gau rakshaks with weapons," says Naveen Sharma of Panchkula. "Whatever this government does is only for show."

Khattar's readiness to introduce a special dispensation that will allow foreigners to eat beef in the state has found support. "The foreigners can lock themselves up in a room and eat whatever they want. But we will not allow locals to consume beef," Naveen Sharma intones.

Other BJP-run states throw up a similar picture. In Chhattisgarh, the first state in the country to enforce the ban on cow slaughter, buffaloes and their progeny, there is visible discontent among gau rakshaks, despite Chief Minister Raman Singh's vow to hang the culprits. 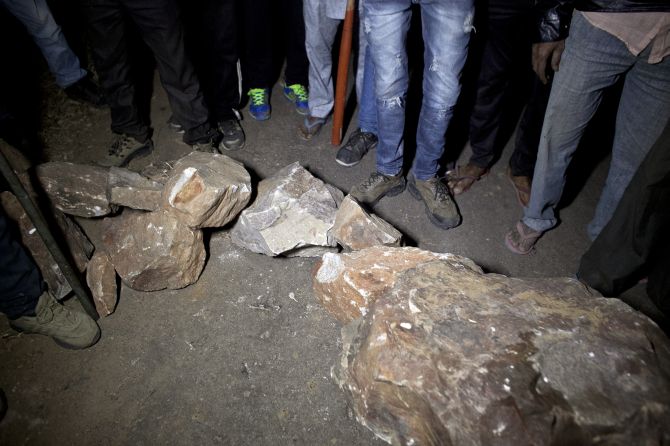 IMAGE: Stones placed on the road to halt trucks that could be carrying cows. The gau rakshaks stand by with weapons. Photograph: Allison Joyce/Getty Images

"The law is not strictly enforced because of the authorities’ callous approach," says Omen Bisen, state convener of the Vishva Hindu Parishad's Gau Raksha Wing. "Even if the volunteers nab the people involved in cow smuggling, the police fail in lodging even FIRs."

In refreshing contrast to some of his associates, there is nothing intimidating about Amit Kumar Joshi who heads the Mohali chapter of the Bharatiya Gau Raksha Dal. He readily agrees to a meeting at the Devki Nandan Gaushaala, flanked by swanky car showrooms.

"It is very simple. If the police do their job, we don't have to step in. Why would anyone leave home in the middle of the night and fight these people?" asks Joshi, dressed in an embroidered pink kurta and blessed with a genial persona.

Joshi's defence of cow protection revolves around scientific reasons. "In villages across the country, every household has a cow that helps sustain it financially," says Joshi.

In some ways, cow vigilantism is a sorry reflection of state administrative failures.

In other ways, as some locals contend, it is plain bullying.

The police are often caught in the crossfire between the gau rakshaks and meat transporters.

"We get open threats from both parties," says a sub-inspector of the Punjab police. "And they both have political backing. Plus, their battles are like gang wars. Nobody wants to interfere."

Gau rakshaks, though, insist the police let smugglers slip through by taking bribes. 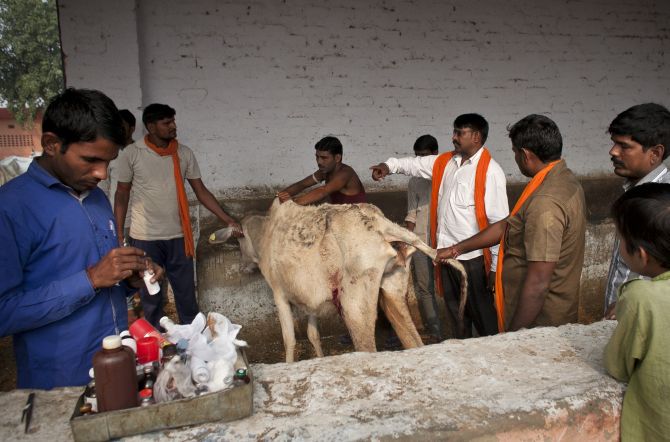 IMAGE: Cows injured in a gau rakshak operation are treated for their injuries at a cow shelter. Photograph: Allison Joyce/Getty Images

It's not only holy reverence and supervisory ineptness that drives them to such vigilantism -- there is adventure too.

Some of the younger gau rakshaks enjoy the thrill of the chase: Stopping vehicles, wielding weapons, badgering passengers and then gloating.

"A few of the younger boys come from rich landlord families and don't have jobs. But they have the gusto to do something like this, which their bosses like,? says an officer of the Haryana police.

Most of these volunteers are paid no stipend, gau rakshak organisations claim.

Despite the deterioration in law and order in these states, meat transporters -- most of them Muslims -- have been left unnerved. "That's why we need weapons. We need to create that fear," says Arya.

Several vigilante organisations upload videos of them rescuing cattle and then flogging the traffickers.

These videos are then circulated widely, all with the purpose of invoking terror.

In fact, Satish Kumar, the thickly mustachioed, gun-slinging chief of the Punjab Gau Raksha Dal, was slapped with multiple charges -- including abduction and sodomy -- and arrested from Vrindavan in August last year.

One of the charges levelled against him included thrashing people in a video in the name of cow protection.

At the organisation's headquarters in Rajpura in Punjab, hefty young men with rippling muscles go about their exercise routine in unison. None of them wants to talk about what happened. 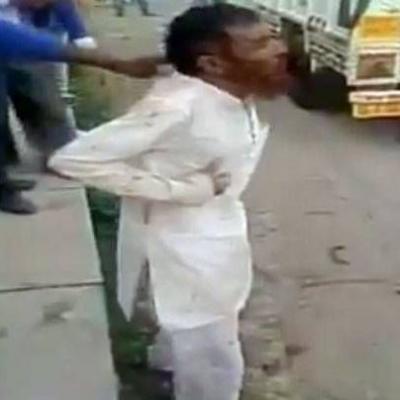 IMAGE: A scene from the horrific incident in Alwar, Rajasthan, where Pehlu Khan was beaten to death by a group of gau rakshaks.

Most gau rakshaks refuse to tag cow protection as an issue that inevitably pits Hindus against Muslims.

"I have Muslim friends who revere the cow more than I do. What does that tell you?" asks Joshi.

Pandit carefully states that his organisation is neither anti-Muslim nor anti-Dalit.

Yet, their commitment to their goal remains steadfast.

As afternoon starts to set in on the lush green lawns at Dayanand Math, Arya gets one of his attendants to fix the engine of his patrolling jeep, the one with the smashed windowpanes and bullet holes.

He then gets someone else to drape his saffron turban before getting behind the wheel and driving off with a volunteer in tow.

Ask him if he has ever feared for his life and Arya offers a sterling testament to the cause he has chosen to pursue.

"When it comes to your mother, nothing matters. We can do absolutely anything."

R Krishna Das in Raipur and Vimukt Dave in Ahmedabad contributed to this report.