News
Business
Movies
Sports
Cricket
Get Ahead
Money Tips
Shopping
Sign in  |  Create a Rediffmail account
Rediff.com  » News » 'Not my Hinduism' should be our slogan

'The cow is sacred to many of us, but these killings are definitely not part of the Hinduism we know and practise,' says Jyoti Punwani. 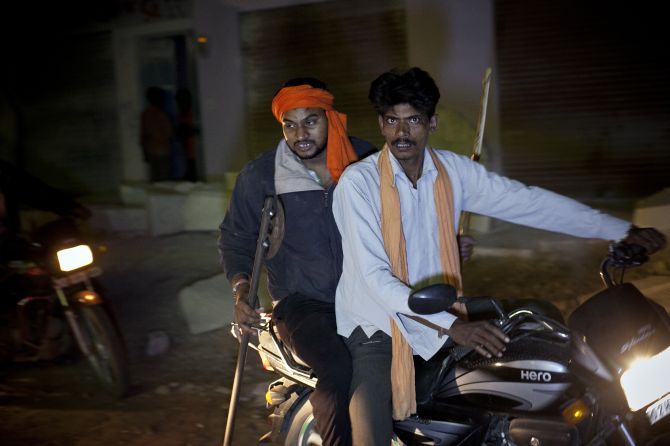 How do we deal with the continued lynching of Muslims by gau rakshaks?

In the 17 months since Mohammed Akhlaq was beaten to death in UP on suspicion of having cooked beef, eight Muslim men have been killed, two Muslim women raped, and almost 40 persons, including two women and seven non-Muslims, assaulted by gau rakshaks.

One of the eight victims, 22-year-old Minhaj Ansari, died in police custody in Jharkhand, after his arrest over a WhatsApp message on beef.

That's a rate of over two lynchings a month.

On Wikipedia, the topic 'Lynching in the US' informs us that an average of five lynchings a month took place there over a 73-year period.

It is time now to create a similar topic for India, with advisories for tourists on areas with the most lynchings, and a warning that if they must visit these beautiful locales, eating meat should be strictly avoided.

One reality we have to face is that the State will not stop such lynchings. The silence of The Leader has once again been deafening. Ironically, he was busy welcoming Sheikh Hasina, Bangladesh's prime minister, when a 55-year-old dairy farmer Pehlu Khan's lynching was playing out on our television screens and being debated in Parliament.

The smuggling of our cattle to Bangladesh has long been an irritant for the ruling party. One of the first things Home Minister Rajnath Singh did was urge the Border Security Force to crack down so hard on cattle smugglers that Bangladeshis would have to give up beef! The Bangladeshi PM must surely have heard that remark.

What would she have thought about Pehlu Khan’s lynching? If nothing else, it must have reassured her that her country was not alone in letting violent fanatics run amok against minorities.

In Pakistan, there's open rejoicing that finally, their founder's Two-Nation theory is being proved right in India.

That's just not true. Yet, can we who reject that poisonous theory convince the Pakistanis otherwise?

Do the powers that be consider these lynchings wrong?

When pushed by a media outcry, the police arrest a few gau rakshaks, but it is obvious that for them, the survivors of such attacks are the real offenders.

The filing of charges against Pehlu Khan's companions, who were also attacked, follow a pattern that began in October 2015, in Congress-ruled Himachal Pradesh. For the police, whoever is in power, Hindutva rules, and no Congress state government has done anything to make the police feel otherwise.

Five Muslims were attacked in Himachal Pradesh's Lavasa village, Sirmaur district, in October 2015, for ferrying cows; of them, 20-year-old Noman died. The police arrested the Muslims and a few assailants, but the latter quickly got bail.

Similarly, an FIR was lodged against Mohammed Akhlaq's family members when the Samajwadi Party ruled UP, though this happened under court orders.

Today, the lower courts, the government and the police, treat Muslims dealing with cows, be they dairy farmers or cattle traders, as offenders. Meat-eating Muslims are similarly treated because today, the BJP has defined all meat eaten by Muslims as beef.

This was demonstrated not only in Akhlaq's case, but also in the recent raid on a Jaipur restaurant where workers were thrashed for discarding chicken bones near a garbage bin where a cow was standing.

Given these ground realities, what should the rest of us do? By 'us' is meant those repelled by this kind of murderous religious zeal. This zeal repels us as human beings; but surely it also repels us as Hindus.

These public killings of unarmed Muslims and the whipping of unarmed Dalits are being done in the name of Hindu belief in the sanctity of the cow.

The cow is sacred to many of us, but these killings are definitely not part of the Hinduism we know and practise. Yes, physical ill-treatment of Dalits is part of some Hindu texts, but today, few Hindus would justify it.

Since March 12, 1993, when the first major act of terror was executed in the country by a group of angry Muslims in Mumbai, we have been asking Muslims to speak out against the terrorist acts of a few of their co-religionists.

A similar demand was made a decade earlier from Sikhs, because sant Jarnail Singh Bhindranwale and his followers were creating mayhem in Punjab. Indeed, the late Shiv Sena chief Bal Thackeray humiliated Mumbai's Sikh leaders at a press conference on this very demand.

But Hindu intellectuals have always condemned the likes of Thackeray, Pravin Togadia, and RSS/BJP leaders, including ex-deputy PM L K Advani and current PM Narendra Modi. That's as it should be -- wherever one community is in an overwhelming majority, its intellectuals act as conscience keepers when minorities are attacked.

But the climate of violent intolerance brought in by the new government at the Centre must force even ordinary Hindus to speak up against the way their religion is being projected by the ruling party.

'Not my Hinduism' should become our slogan, and we should be marching on the streets to proclaim it.

Not only to reassure non-Hindus that the Hindu majority regards them as equal citizens -- an assurance which is urgently necessary -- but also to reassure ourselves that the religion we practise is not a murderous one.

Like Muslims are being told to reclaim Islam from ISIS, Hindus must now reclaim Hinduism from the version being projected today.

Those who led us through Independence realised the damage done by the Hindu caste system and the need to compensate, hence they included reservations in the Constitution.

But those who govern us today show no signs of acknowledging the crimes being committed in the name of Hinduism by their followers. Instead, there's unabashed approval of this savagery.

This makes it all the more important for ordinary Hindus to proclaim their disapproval of this terror, even to express regret to those attacked in the name of Hinduism.

There is a very recent precedent for this: After Coach S-6 of the Sabarmati Express was burnt at Godhra on February 27, 2002, the religious head of Godhra's Muslims, Maulana Umerji, publicly apologised for this act by members of his community.

Why should only minorities have to bear this burden of guilt for the misdeeds of their co-religionists? The majority bears much more responsibility.

What can those bearing the brunt of the attacks do?

After Una, Dalits in Gujarat abandoned dead cows on the streets, refusing to skin them. Can Muslims give up anything to do with cows, even rearing them? That would be difficult, given that often their livelihood depends on them. But it might just be worth the suffering.

Because the ultimate sufferer of the gau rakshak violence and the rapidly spreading bans on meat eating is the farmer, for whom cattle, be it cows/bulls, become a burden after a certain age. A majority of our farmers are Hindus. Let them protest.

As business goes down in cattle fairs, let those who can no longer find buyers for their cows protest. There have been reports from across the country of Hindu cattle traders and farmers being angry with the drop in their business and the risks involved.

In Karnataka, a BJP worker ferrying cows was killed by gau rakshaks last year, and many Hindu traders have reported attacks on them. Let them pressurise their governments; after all, the BJP has made it clear in its electoral campaigns and strategies that it is a party only of and for Hindus.

That, however, may be an impractical solution. An immediate solution to end the impunity with which gau rakshaks attack their prey, in daylight and in full view of passersby, is to petition the courts.

A public interest ligitation filed by Congressman Tehseen Poonawala asking for a ban on gau rakshaks is currently being heard by the Supreme Court. But bans work only when the State wants them to.

Instead, why can't rights activists -- most of them happen to be Hindu -- ask that the court set up a mechanism to monitor the action taken after attacks by gau rakshaks?

If there can be an National Investigation Agency to deal exclusively with terrorist acts, why can't courts set up Special Investigative Teams to monitor gAU rakshak terror?

IMAGE: Gau rakshaks on the prowl to catch alleged smugglers. Allison Joyce/Getty Images went out with one such group in Rajasthan last year to get a sense of their working style. You can see the feature here. 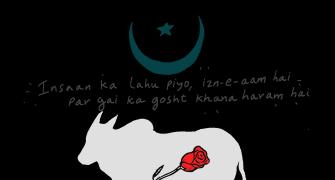