'Both sides were so embittered by what had happened last year that I didn't know what to expect.'
Jyoti Punwani reports from the Bhima Koregaon hearing. This makes him unique among the Dalit witnesses who have testified before the Bhima Koregaon commission, all of whom said that they were regular visitors to the historical spot.

Unfortunately, that first experience left the journalism student from Nanded so traumatised that he didn't go back this year.

"I was afraid; both sides were so embittered by what had happened last year that I didn't know what to expect," Kahalekar told Rediff.com after finishing his deposition before the Commission.

"Now I regret not having gone."

Prakash Ambedkar was the reason Kahalekar ended up going to Bhima Koregaon.

He heard of the Elgar Parishad which was to be organiSed in Pune on December 31, 2017 with Ambedkar's active involvement, and got involved with a group led by Sham Nilangekar of the Bharip Bahujan Mahasangh that was mobiliSing for it.

This group toured villages in Maharashtra on motorcycles to mobilise villagers to turn up at Bhima Koregaon on January 1, 2018, to mark the 200th anniversary of the battle of Bhima Koregaon.

The mobiliSation drive was also aimed at ensuring a large turnout at the Elgar Parishad.

Everything went well till Kahalekar reached the Jai Stambh at Koregaon on January 1, after having attended the Elgar Parishad on the previous day.

As he was listening to the speech of Anandraj Ambedkar, Prakash Ambedkar's younger brother, and head of the Republican Sena, an injured man came running there saying that they were being attacked.

When he came out on the road, Kahalekar saw smoke in the distance and Dalits saying they had been attacked.

In his affidavit, Kahalekar writes that the police had failed to maintain law and order and protect the Dalits.

Though Kahalekar himself wasn't injured, some of his companions were.

It was decided by the group that a few of them would file affidavits before the Bhima Koregaon inquiry commission to voice what they had seen.

After the Bhima Koregaon violence and the bandh called by Prakash Ambedkar, Kahalekar decided to join Ambedkar's political organisation, the Bharip Bahujan Mahasangh.

He was made the IT cell chief of the BBM of his taluka.

Later, he also worked for Ambedkar's Vanchit Bahujan Aghadi in the Lok Sabha and Vidhan Sabha elections this year.

Yet, there was no one to guide Kahalekar on what was involved in deposing before an inquiry commission.

The police warned him that he had better go to Mumbai and depose on the date on which he was summoned.

So, though his father was to be operated upon that day, and money was short, Khalekar landed up in Mumbai in the morning. This was the first time he was visiting Mumbai.

As soon as his train reached, he brushed his teeth in the waiting room and set off for the venue, not wanting to be late.

As it turned out, he had to cool his heels for a good two hours before the commission started its hearing.

"I'd thought I would just have to say what I had written in my affidavit and leave," said Kahalekar, adding that he had bought a return ticket for the same day.

Instead, he was cross-examined and then called a second time.

On Tuesday, Kahalekar's cross-examination by Shishir Hiray, counsel for the government, was completed.

Hiray asked him about the photograph of young women with rifles which he had posted on his FB page.

Kahalekar said he had meant to write a post accompanying the photograph, saying that only the police and the army were allowed to take up arms, and no group should do so.

This he said, was what Dr Ambedkar had said.

He said he couldn't say who those women were, but they seemed to be undergoing training in handling rifles. He had found the photograph on somebody's FB page and posted it.

Kahalekar deposed that he had heard Prakash Ambedkar's speech at the Elgar Parishad and found nothing provocative in it.

He hadn't paid much attention to the speeches made before Ambedkar, who spoke at the end.

Advocate Kiran Channe, representing Dalit activist and Bhima Koregaon victim Ravindra Chandane, conducted the young man's examination in chief, though he was technically not his lawyer.

In fact, Kahalekar had no lawyer representing him.

On Tuesday, nobody from the BBM was there for this young follower of Prakash Ambedkar. Only his brother accompanied him.

"Do you think by deposing in front of the commission, I will get into trouble?" the young man asked worriedly. 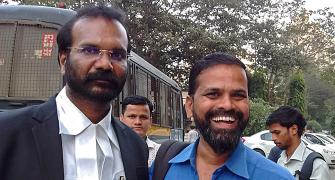 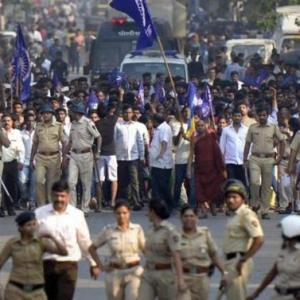 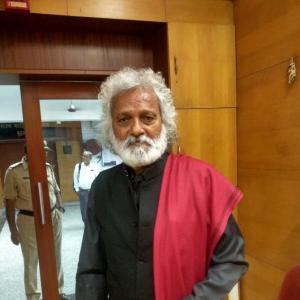