Tanaji Sable's story confirmed what the first witness had told the commission: That the Dalits who had gone to Bhima-Koregaon were stoned; that there were motorcyclists bearing saffron flags roaming around inspiring fear; that the police did nothing to protect the Dalits.
Jyoti Punwani reports from the Bhima-Koregaon commission hearing. 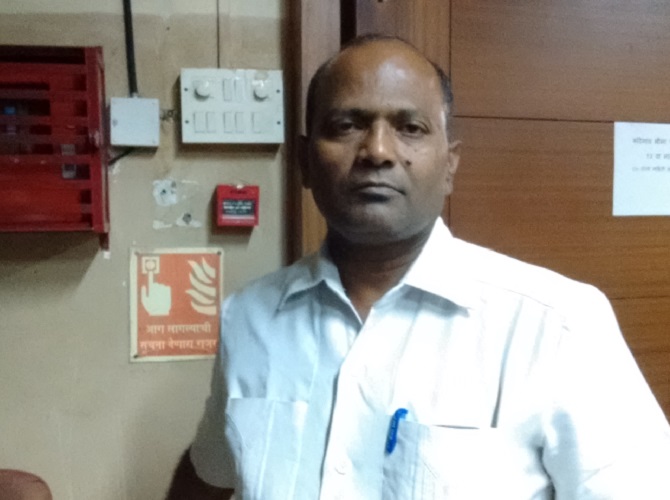 IMAGE: Tanaji Sable who testified before the judicial commission on the Bhima-Koregaon violence. Photograph: Jyoti Punwani for Rediff.com

When Tanaji Sable took the stand before the Judicial Commission of Inquiry set up to inquire into the violence that took place at Bhima Koregaon near Pune on January 1, 2018, it seemed nothing much would come of his deposition.

Except the government counsel, no one wanted to cross-examine him before the two-member commission chaired by retired Calcutta high court Chief Justice Jai Narayan Patel with Chief Information Commissioner of Maharashtra Sumit Mullick as member.

Till senior counsel B A Desai decided to do so.

Advocate Desai, who is representing Congressman Sanjay Lakhe Patil before the commission, took Sable through the important points of his affidavit. By the time he finished, every lawyer appearing before the commission wanted to cross-examine the 53-year-old BEST bus conductor.

In fact, when the commission rose for the day at 8 pm, Sable's cross-examination was incomplete. He looked worried when asked to come back on the 24th. "I don't know if I will get leave," he said.

The commission then gave him a letter stating that he was required to attend its hearings on September 24.

Sable's story confirmed what the first witness, Manisha Khotkar, had told the commission: That the Dalits who had gone to Bhima-Koregaon on January 1, 2018 were stoned; that there were motorcyclists bearing saffron flags roaming around inspiring fear; that the police did nothing to protect the Dalits.

Sable left for Bhima-Koregaon at midnight on December 31, with his group from Ramabai Nagar, the Dalit colony at Ghatkopar, north east Mumbai, which was the epicentre of protests in July 1997. A statue of Dr Ambedkar was then desecrated there and the police fired on the protestors, killing 10 of them.

Unlike Khotkar and her companions, whose bus was stopped by the police before they could reach Bhima-Koregaon, and who could not proceed further because of the violence that had broken out, Sable's group managed to reach the Bhima-Koregaon memorial.

However, this time, the journey was nothing at all like Sable's previous journeys to Bhima-Koregaon.

There were people with saffron flags shouting Jai Bhavani Jai Shivaji. Some were forcibly smearing haldi on the foreheads of everyone, including the Dalits there. All shops were closed.

All this created an atmosphere of fear, Sable told the Commission.

After they returned home, Sable and others in his group recounted what had happened to them to the police at the Pant Nagar police station at Ghatkopar.

His statement to the police says that as they left Bhima-Koregaon, after their bus had travelled some distance, 15 to 20 youth aged 20 to 25 years, stopped their bus.

They made them remove the banner of the Bharatiya Baudh Mahasabha from their bus as also the blue flags stuck on it. They also warned the Dalits not to ever come there again.

In response to a question from advocate Desai, Sable said the police had not contacted him after the statement.

The police also came in for criticism for their role at Bhima-Koregaon. Instead of protecting them, said Sable, the police were scolding them and telling them to return to their buses.

The bus conductor told the commission that he was a Baudh Acharya in the Bharatiya Baudh Mahasabha (an organisation founded by Dr B R Ambedkar), and could recount the stories behind the three memorials at which his group had paid homage.

These were the memorials to Govind Gaekwad and Sambhaji Raje at a village called Vadhu, and the Vijay Stambh at Bhima-Koregaon which marks the victory of the Mahars who fought in the British army over the Peshwas.

Sable recounted why the Mahars chose to fight for the British. They first offered their services in war to the Peshwas, on condition that the Peshwas free them of the stigma imposed on them: carrying a matka (pot) around their necks and a broom around their waists whenever they appeared in public.

However, the Peshwas refused to do so. The Mahars then went to the British who agreed to do so.

The same story was recounted by the first witness Manisha Khotkar.

In the battle, said Sable, about 100 Mahars were killed. Their names are inscribed on the Vijay Stambh at Bhima-Koregaon, but are today faint and blurred, he added.

It was with pride that Sable recounted the story behind the other two memorials.

Mahar brothers Govind Gopal Gaekwad and Ganpat Gaekwad were the only two persons courageous enough to collect the pieces of Sambhaji Raje's body (which had been hacked by Aurangzeb's men).

The pieces were stitched together by Charmkars or Chamars who thereby got the surname Shivale (meaning 'stitched').

Sable said he had read these accounts from books, including one called Bhima Koregaon-cha itihaas (The history of Bhima Koregaon).

Like Manisha Khotkar before him, Sable stuck to his guns during cross examination by advocate Niteen Pradhan, who is representing former BJP corporator Milind Ekbote, the person named in the very first FIR for being responsible for the violence at Bhima-Koregaon (along with Sambhaji Bhide).

"Every year we go right up to Bhima-Koregaon by bus," he replied. "This year, because of the huge crowd, the police had made us park our bus at Shikrapur village, some distance away."

Desai also criticised the suggestion made on Thursday by Hiray that a "third party" could have been responsible for the violence.