News
Business
Movies
Sports
Cricket
Get Ahead
Money Tips
Shopping
Sign in  |  Create a Rediffmail account
Rediff.com  » News » How the army taught the Chinese a lesson

The Chinese probably thought its brutal assault was a knock-out, but they had not counted on the ingenuity, loyalty and courage of battle-trained Indian officers and jawans.
David Devadas pieces together what happened on the night of June 15 in the Galwan Valley. 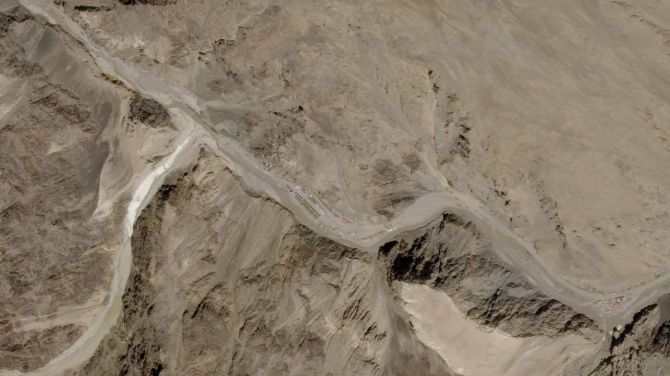 IMAGE: A satellite image of the Galwan Valley in Ladakh. Photograph: Reuters

The battle at Galwan on June 15 illustrated how a well-trained army can most effectively deploy resources and tactics on the run, even as masses of deadly opponents attack it as fast as in a video game.

That night's events ought to be a case study at the finest war colleges. For, the most legendary tacticians in history, from Henry V at Agincourt to Mehmet II at Constantinople, would have been proud to own the tactics employed.

Many of the Chinese troops were from the PLA's Special Forces, the equivalent of the US Marines. And yet the Indian soldiers were able to chase them deep into the Galwan Valley. Indeed half-a-dozen soldiers went so deep that they only found their way back late the next evening.

The country has mainly been told about the first brief phase of that battle, though the entire fighting lasted through most of that night.

That first phase went very badly for the Indians, since the Chinese ambushed them.

During the ambush, the commanding officer of the 16 Bihar regiment, Colonel Santosh Babu, and the 20 soldiers, including two other officers, who had gone with him were brutally assaulted with medieval weapons.

I am told that Colonel Babu was hit on the back of his head and apparently fell into the stream. It was a fatal injury.

I am also told that more than half of the 20 Indian casualties that night took place when that first group was ambushed by a larger number of Chinese armed with bunches of sticks wrapped with barbed wire.

The Chinese probably thought that brutal assault was a knock-out, but they had not counted on the ingenuity, loyalty and courage of battle-trained Indian officers and jawans.

Through the next three phases of that night's battle, scores of Indian reinforcements suffered much fewer additional casualties than they apparently imposed on their opponents.

An officer almost as senior as Colonel Babu had shadowed the lead team with a small team of soldiers.

When he saw the ambush from a distance, he promptly called in reinforcements. I am told he then led a bayonet charge which took the fight to another level.

I am told the lieutenant colonel (now a full colonel), was one of the Indian Army's most proficient Ghatak warriors. He certainly earned fresh spurs that night.

Since Ghatak warriors are trained for hand-to-hand combat, he and his men were able to inflict severe damage on their opponents, even after the latter called up substantial reinforcements.

Even after Indian reinforcements arrived to take the battle into its third phase, they were severely outnumbered by the Chinese reinforcements -- ten to one, according to one officer's estimate.

Yet, they went into the fight ferociously, proving equal to the larger numbers of Chinese troops.

I am told that most of the reinforcements were from the 3 Medium Artillery Regiment and the 3 Punjab Regiment.

But as word spread that a 'CO saab' had been killed by the Chinese, enraged soldiers of all sorts rushed pell-mell to the battleground.

I am told that two nursing assistants and several signals operators were among those who joined the battle.

The reinforcements fought doughtily. One Gurtej Singh is said to have fought with great prowess, taking down a large number of opponents before he was felled.

One of the Chinese looked important. So, later that night, a spirited bunch of soldiers decided to grab him and carry him back.

That chance move took a turn more like a Hollywood thriller the next morning.

When the Chinese commander called up to ask worriedly about him, it turned out that he was the officer in charge of the PLA special forces in Galwan.

I am told PLA special forces had just arrived to take over the Galwan area. Colonel Babu had gone trustingly because he had a good equation with the CO earlier in charge there. Instead, he found the special forces waiting in ambush.

Far more truculent than those who were earlier deployed, they were the ones who used nail-studded maces.

Of course, capturing a special forces officer is a huge feather in any military cap. As one officer exulted: "The catch was definitely prized. Just think (it is like) we get the CO of the (US)Navy Seals."

Two very different Indian officers have told me that that Chinese officer's capture decidedly turned the tide of the battle at Galwan. The Chinese morale nosedived.

Later that night, a group of Gorkha soldiers joined battle along with a team of engineers who, I am told, wrought havoc of a different sort in the fourth phase of the battle at Galwan, completing the military objective of that night's operation.

After the major setback with which the night began, it is truly commendable that the military objective was achieved amid the fog of war which, in every sense of that term, enveloped that night.

If the government had not chosen to only own the deaths of 20 Indian soldiers, distancing itself from the outstanding displays of prowess on that battlefield, it could have been a tremendous morale-booster at a time when the nation is confused about the government's strategy in response to a strident Chinese challenge.

Indeed, to prevent details from emerging, mobile communications were shut down at the front for a week after the battle, and soldiers's phones were confiscated. The videos some of them had taken of the mayhem on the battlefield by the early morning were not allowed out.

However, some information has spread among other officers, and I have pieced together what happened that night through chats with a couple of mid-ranking officers who have had authentic information from the front.

I hope the officers who led the fight back are duly recognised on Republic Day if not on this Independence Day. The country must acknowledge how valiantly the army fought against great odds that night.

The government, which initially focused on preventing escalation, must re-think how to treat the battle of Galwan in light of the clear evidence that has emerged in the last six weeks that China is in any case intent on escalating hostilities right across the two countries' boundaries.

David Devadas, the author of The Story of Kashmir and The Generation of Rage in Kashmir, is a political and geostrategic analyst.