'Infectious disease is a given of humankind. There will always be another around the corner.'
Rahul Jacob listens in. 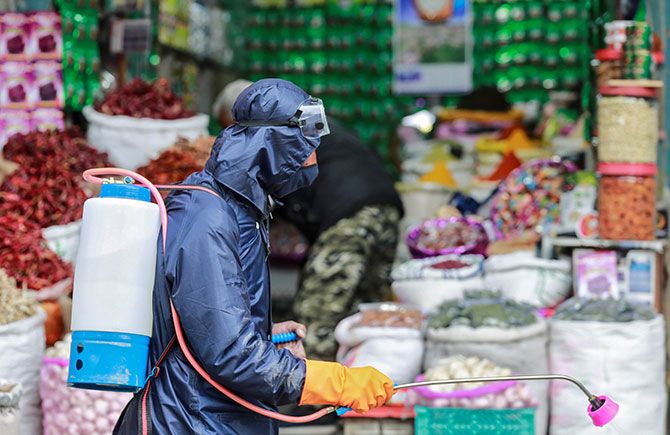 The Thursday of Gautam Menon's talk on Covid-19 in late February is also a busy one that coincides with the opening day of an exhibition of artisanal work inspired by Mahatma Gandhi.

As soon as Menon, a professor of biology and physics at Ashoka University and a leading authority on the spread of viruses, has tested the audio-visual system, I ask him if the government's public campaigns on how to avoid becoming infected have been too muted.

"You have to balance the fact that you don't want to scare the public," he says, before going on to say that the public health messaging on adopting different types of behaviour such as, say, not shaking hands had been inadequate.

In the past few days as the numbers of infected in India have escalated, there has been a greater sense of urgency.

"The PM cancelling his attendance at Holi functions sends out the right message," Menon said in an e-mail.

One of the problems for health officials worldwide in slowing the infections is that the symptoms do not show for several days.

This makes isolating the infected quickly and tracing people they have been in contact with extremely difficult when compared with the severe acute respiratory syndrome (SARS) outbreak that infected 8,000 people and killed 800 in 2003.

Temperature tests at airports have proved inadequate, leading to long quarantines that may need to be even longer.

"The medical science is still to be established; 14 to 21 day (quarantines) is probably optimal," he says.

Globally, Covid-19 has been less lethal than SARS or the Middle East respiratory syndrome (MERS), but it has been incredibly virulent.

In addition to droplets from coughs and sneezes, a less typical mode of transmission could be faecal-oral because the virus has been found in stool samples, which "would be a problem in a country with poor sanitation like ours". Tea for attendees is laid on by the BIC, and is a choice of tea and 'instant' True South filter coffee decoction and salty biscuits.

Menon, who worked at Chennai's Institute of Mathematical Sciences before joining Ashoka, is quickly surrounded by friends from academia.

As Menon's lecture begins, he seems an academic who, like the dastangoi artistes, dispenses wisdom through storytelling.

His first slide is a screen grab of a CNN.com story from June 2015 about two patients in South Korea dying from MERS.

Menon then details how the first victim from Korea travelled across the Middle East before returning home and infecting his wife, people who had visited him in the hospital and other visitors to the hospital.

A rapid history of viruses, before pausing to reflect on the Spanish flu in 1918-1919, which infected 500 million worldwide and killed 17 million in India, follows.

"Infectious disease is a given of humankind. There will always be another around the corner."

A poster of the Hollywood film Contagion pops up on a slide.

"It's not a bad film," he says -- in case we wish to download it that evening.

The Covid-19 belongs to the family of coronaviruses that is "the second leading cause of the common cold", he says.

He then briskly explains why SARS and Covid-19 originated in wet markets in China: The killing of animals and sloshing of water on the floors to clean up the blood allowed a mixing of fluids and made it easier for the virus to "spillover" from species such as civet cats, bats and pangolins to human beings.

Menon enthuses about the "groovy nature" of studying viruses because this spans virology, geopolitics and mathematics.

Ronald Ross, who discovered the cause of malaria, argued that "epidemiology is in fact a mathematical subject" when calculating the rates of infection.

Menon uses numbers to highlight that the disease is progressing rapidly into a pandemic, but also to reassure the audience that the chances of dying from it is "minimal".

The fatality rate of 2 per cent to 3 per cent is well below that of MERS, which was as high as 37 per cent, and of SARS at 10 per cent.

The Covid-19 death rate also obscures that the elderly suffer much higher fatality rates (15 per cent).

"Children tend to be hardly affected," he tells me. IMAGE: A student demonstrates how to wash hands during an awareness campaign about coronavirus at a school in Chennai. Photograph: P Ravikumar/Reuters

Demystifying the epidemic, he debunks the effectiveness of masks when worn by the average person.

"The mask has to be worn and taken off in a specific way and one should take care not to touch it. (It provides) more psychological than real protection."

American doctors on Twitter have argued that the stampede to buy masks by people not trained to use them will leave medical personnel on the frontline short of them.

On stage, Menon regrets not having a bowl to demonstrate how thoroughly one has to scrub one's hands -- on both sides, fingernails included and all the way up to the elbow.

In a country where public toilets are often devoid of soap and people eat with their hands, this seems of mission-critical importance.

A Canadian public official has likened it to washing one's hands as if one had chopped chillies and was about to put on contact lenses. 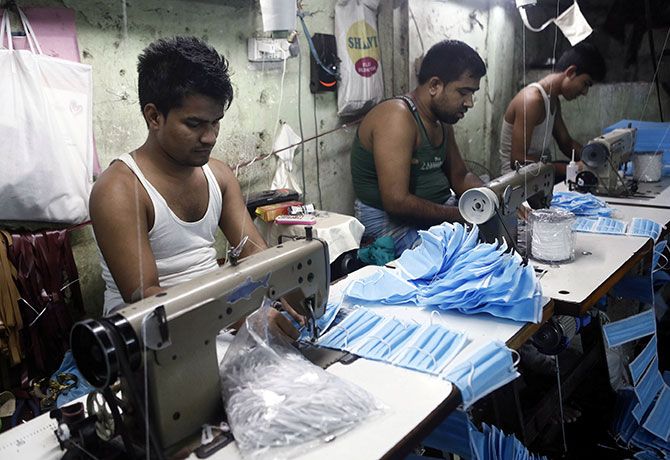 How prepared is India?

The first health system to be tested was Kerala's, which, Menon points out, enjoys immense public trust.

This is required when administering stay-at-home rules or quarantines such as those seen in China, where 60 million people were in lockdown for a month after the outbreak was made public on January 23.

People accept these extraordinary conditions for the most part, he observes, when such rules are perceived to be "for the greater good and everyone is seen to suffer equally. One analogy could be demonetisation".

While Kerala dealt with the Nipah virus effectively and India handled the quarantines of returnees from Wuhan well, "the number of cases was small".

China has many more doctors and hospital beds relative to its population than India and is a single-party government administered by technocrats.

"Even the Chinese system was creaking at the seams," he says. 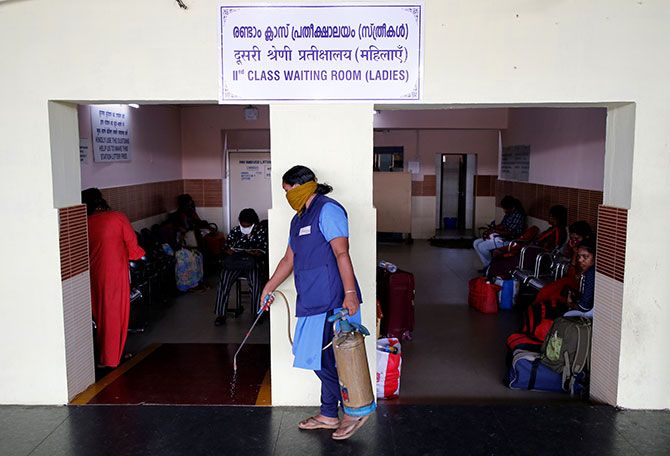 IMAGE: A railway staff sprays disinfectant outside a waiting room at a railway station as a preventive measure against coronavirus in Kochi. Photograph: Sivaram V/Reuters

Coughs in the audience punctuate Menon's talk, and he himself was suffering from one.

This is an additional challenge for overloaded hospitals in India.

"Respiratory distress as one possible symptom of the coronavirus infection in a country that contains 18 of the 20 world's most polluted cities, isn't particularly useful," he wryly points out.

After questions about how long a vaccine might take and whether Covid-19 came from a biological warfare lab, which Menon dismisses, the talk is wrapped up.

Menon is surrounded by people who want the professor to play doctor. 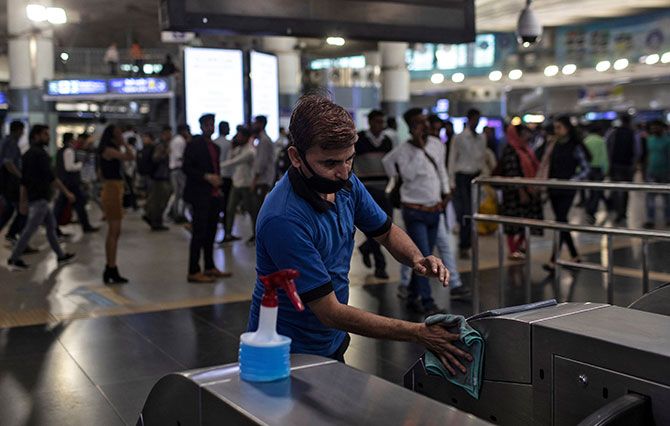 Menon is taken for a brisk tour of the centre.

In an illustration of the energetic private sector/appalling public infrastructure dichotomy that characterises Bengaluru especially, I am pursued by mosquitoes from the stinky nallah nearby and dust from a giant construction site as my Uber taxi drives away.

The philanthropy of Nandan and Rohini Nilekani and corporate managerial smarts has made the BIC a unique place. Bengaluru, however, is characterised by dust pollution that rivals Delhi's as the city's pavements and roads are dug up in a manner that suggests an earthquake has struck.

This has created a slow-motion crisis of recurrent coughs, asthma and lung ailments.

With the Covid-19 epidemic upon us, years of apathy about pollution may have handicapped India's ability to fight it.