'In the course of my interactions with him, Modi insisted that he does not believe charisma alone can sustain people's trust for long.'
'That is why Modi consistently refers to Mahatma Gandhi to contextualise his politics.'
'He believes in taking his ideas to the masses and getting their acceptance as an index of approval.'
A revealing excerpt from Ajay Singh's The Architect of the New BJP: How Narendra Modi Transformed the Party. 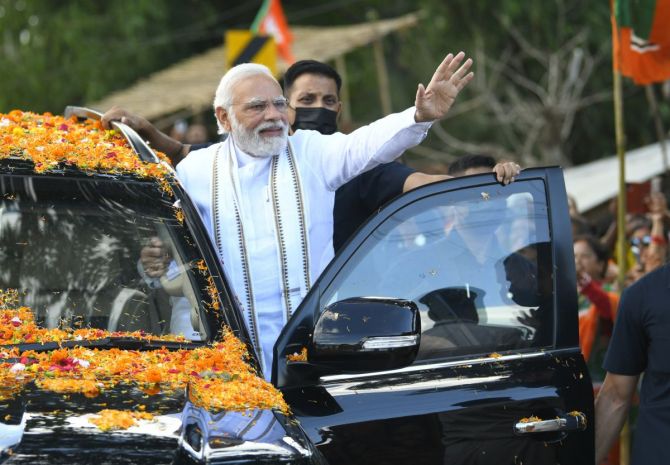 If he was innovating techniques, he also remained committed to the core values as a long-

That was the time when Modi shifted from the RSS to the BJP and, in close coordination with the top party leadership, he began shaping the organisation in Gujarat through his innovative methods of expansion.

If he was innovating techniques, he also remained committed to the core values of a long-time RSS pracharak. Unlike traditionalists within the BJP, Modi has always been acutely conscious of the reasons that prove to be the undoing of political parties that fail to adapt to the changing times.

Till the '90s, the BJP's organisational expansion was seen as the party's outreach among people through its trained cadres. Modi singularly changed the definition of expansion by including infrastructure as a basic necessity for the growth of the party.

In the early '90s, he used to tour Gujarat and insist on building offices and membership registers to facilitate quick connection with workers. He adopted the same model in every state where he served, and deployed information and communication technology to enrol new workers.

Looking at the large pool of younger people from urban as well as rural parts of the country, he egged on party leaders to launch a drive to enlist them and assign them a larger purpose in life -- to contribute to nation building.

In his role as party builder, he did not remain ideologically rigid and was seldom guided by prejudices or political dogmas. His decision to align with Bansi Lal in Haryana, despite the latter's infamy during the Emergency, is a good example.

He found the old guard of the party in Madhya Pradesh and Himachal Pradesh expendable, as they were not only outdated but also not well versed with the political grammar of the younger generation.

Though he faced criticism, he stayed the course against all odds and won the day eventually. In Haryana, he tried to cultivate women as a new constituency for the BJP by promoting unconventional choices when it came to electoral candidates, like war widows. 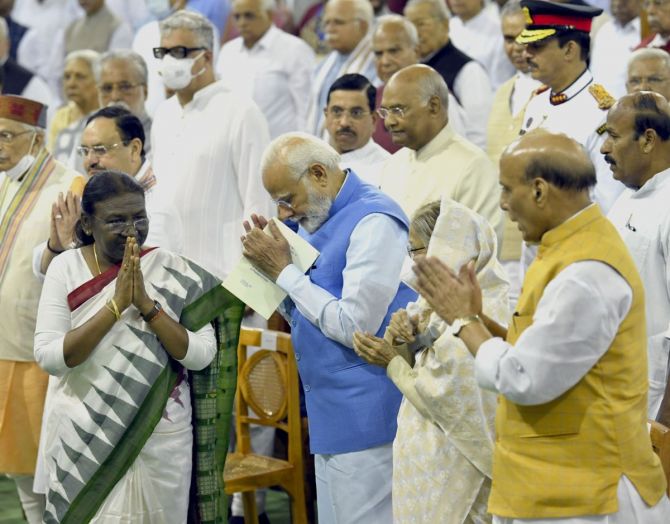 In his role as chief minister, he honed the skill of seamlessly aligning the organisation with the government's social programmes. He remains consistent even as prime minister to focus on the growth of the BJP, which has become the world's biggest political party.

Unlike the National Democratic Alliance government led by Vajpayee, which faced dissonance from the Sangh Parivar's constituents like the Bharatiya Mazdoor Sangh and Swadeshi Jagran Manch, the NDA government led by Modi remains in perfect alignment with the Sangh Parivar. He fits into the role of a 'classical sangthanist' whose tactical moves would eventually benefit the ideology in the long run.

As Modi's stature grew and he achieved exceptional popularity, he went beyond the prevailing political idioms and lexicons in his dialogue with the masses.

Modi's eloquence, though much praised and a key aspect of his image, was no match to Vajpayee's oratorical prowess. But for an impatient young India tired of old political latitudes, Modi's style, dramatic touches, punchlines and engaging tone found instant traction in the post-Vajpayee era.

Across the country, he managed to evoke hope among people who were looking for a political alternative. In the course of my interactions with him, Modi insisted that he does not believe charisma alone can sustain people's trust for long. There are a number of political personalities endowed with exceptional charm, yet it can do little for them.

That is why Modi consistently refers to Mahatma Gandhi to contextualise his politics. He believes in taking his ideas to the masses and getting their acceptance as an index of approval. 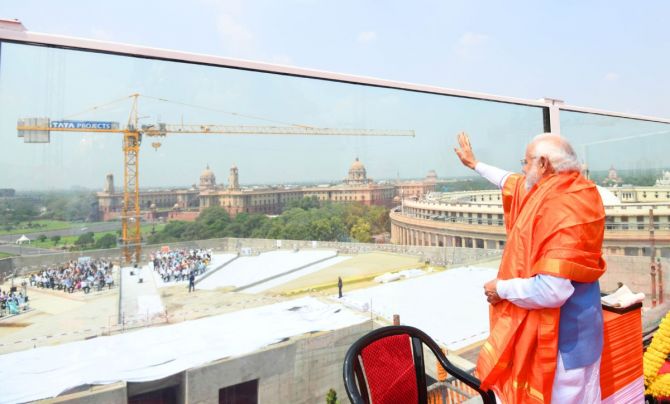 IMAGE: Modi at the unveiling ceremony of the National Emblem at the new Parliament building in New Delhi, July 11, 2022.

Arguably, the secret of Modi's success in groundbreaking methodological innovations is remarkable flexibility. The underlying pragmatism of the RSS encourages and welcomes creative and radical departures from the playbook.

Ever since his induction in the party, Modi has deployed unorthodox techniques, caring little for the old-fashioned dogmatic ways of expanding the organisation. Yet, he met with no censure.

Indeed, his ways were accommodated within the Sangh's scheme of things. This lack of rigidity and openness to experimentation comes naturally to the Sangh Parivar, which sees in this approach an Indian way of dealing with reality. Most outsiders miss this open secret.

That factor -- flexibility -- is the unacknowledged inherent reason for the BJP's growth. If the history of the Sangh Parivar is to be judged in the right context, it readily embraces the ideas that may not be ideologically compatible but get social traction. 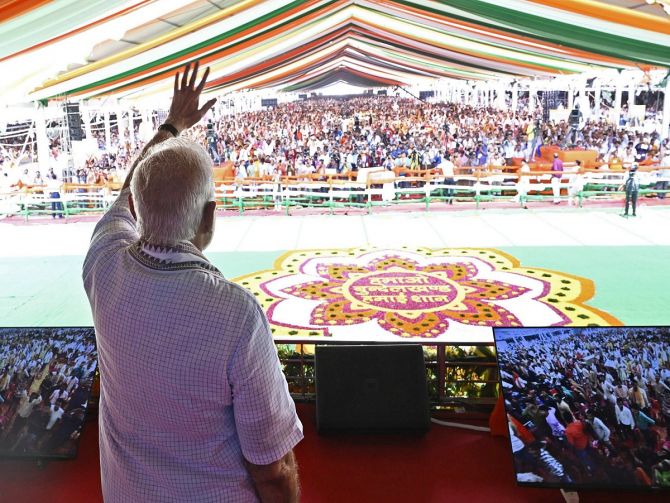 IMAGE: Modi at the inauguration of the Bundelkhand Expressway at Jalaun, Uttar Pradesh, July 16, 2022.

Modi perhaps stands alone in contemporary politics for having taken decisions that entailed hardships for people. Demonetisation and the lockdown amid the pandemic are good examples. But he always owns up his responsibility for each of them and never indulges in passing the buck.

None of those difficult decisions have caused any erosion in people's trust in Modi or in the credibility of his government, because people do not find any fault with his intentions.

Right since the beginning, Modi has kept on emphasising three critical aspects of his working style to win the trust of the masses.

First: 'I will leave no stone unturned for the benefit of the people and the nation.'

Second: 'I will do nothing for personal gain.'

Third: 'I may make bona fide mistakes but won't do anything with bad intentions.'

These three messages from him seem to have hit home, not only with the ever-growing party cadre but also among the party's support base. As a result, the BJP has achieved a scale of dominance attained by the Congress immediately after Independence that continued for decades. 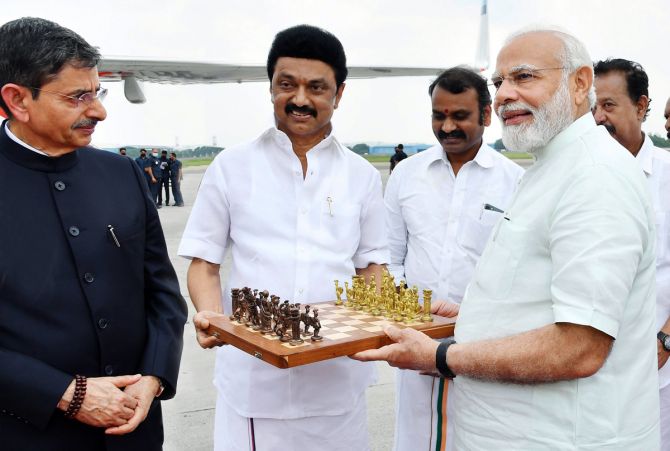 IMAGE: Modi is presented a chess board by Tamil Nadu Chief Minister M K Stalin, right, as the prime minister leaves for Ahmedabad after attending the opening ceremony of the 44th Chess Olympiad and the 42nd convocation of Anna University, July 29, 2022. Photograph: ANI Photo/CMO Tamil Nadu/Twitter.

There is no doubt that Modi is politically astute. He carefully crafts his strategy to win elections. But that is what every politician is supposed to do. The real story of Modi's success lies in his genius for organisation building, which he had so assiduously learnt from a generation of leaders from the Sangh Parivar and applied it successfully over the decades.

At this point, the question arises as to what the BJP's future will be under Modi and beyond him. Perhaps a decade back, the prospect of a BJP government getting a resounding mandate looked a remote possibility. In the early '90s, such an idea was not even worth wasting your time on. Things changed in the past two decades, and the BJP achieved the dominant position in Indian politics. Will this dominance be transient or will it last long?

Right since its inception, the party might have appeared to be fixated on its specific ideological goals, but it had always shown openness to adapting to the exigencies of Indian politics.

In its initial phase of growth, it clearly lacked experienced political leaders, except for Syama Prasad Mukerjee. After Mukerjee's demise, its leadership largely comprised those who were trained RSS volunteers. Hence, they lacked the nimble-footedness of those leaders who were adept at negotiating the labyrinth of Indian politics.

The party leadership initially fumbled but gradually adapted itself to the changing political circumstances. By the third parliamentary election, the BJS had acquired enough political muscle to pose a formidable challenge.

Though the party leadership was never shy of its ideological moorings, inextricably rooted in the RSS, they were allowed complete autonomy to take political decisions for the growth of the party.

When Deendayal Upadhyay joined Ram Manohar Lohia in endorsing a proposal to create a federation of India and Pakistan, it was clearly in conflict with the Sangh Parivar's initial concept of 'Akhand Bharat', or undivided India. But Upadhyay was allowed to take a pragmatic view of the situation.

The party's decision to join the JP movement in 1974 was not impulsive but driven by political pragmatism. Similarly, the BJP supported V P Singh in his anti-corruption movement against Rajiv Gandhi despite Singh's often unfriendly utterances. 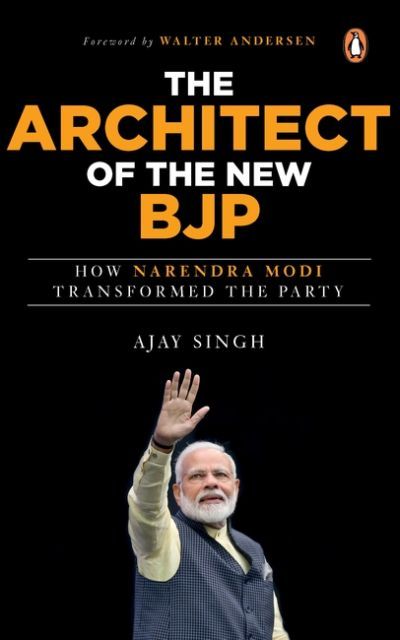 In the course of its political journey, the BJS/BJP not only gained experience in mass movements but also expanded its organisational network to get real feedback from the ground. This helped the party leadership in getting a feel of the pulse of the people. It has developed a unique mechanism of feedback from the ground and specific directions for the cadre to carry out programmes.

When Modi started campaigning for the 2014 Lok Sabha election, cadres galvanised into action as they could see that he was gaining exceptional popularity. Modi, through his innovative methods (discussed in previous chapters), not only expanded the organisation phenomenally but also made inroads into eastern and southern India by co-opting mass based leaders into the party's fold.

The party has consciously groomed a large number of next-gen leaders, at both national and regional levels, who have also been learning expansion methods from the top leadership.

This predominant political position is unlikely to be unsettled in a post-Modi phase, as he will be leaving behind a robust political structure that will keep on creating its own icons of the time.

Excerpted from The Architect of the New BJP : How Narendra Modi Transformed the Party, by Ajay Singh, with the kind permission of the publishers, Penguin Random House India. 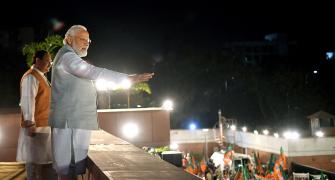 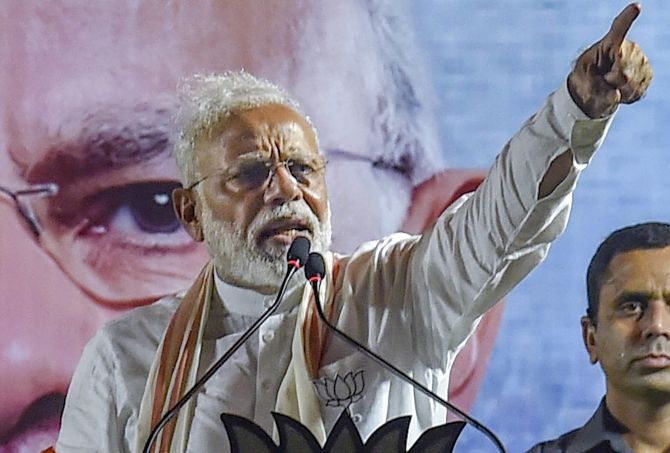