'There are more young people in Assam who are unemployed than possibly anywhere else.'
Lok Sabha MP Gaurav Gogoi explains the election issues in his state.
Aditi Phadnis listens in. All over the compact Delhi flat of Kaliabor (Assam) Lok Sabha MP Gaurav Gogoi, there is evidence of a Very Small Person at work.

One wall is adorned by finger painted pictures. A shelf in a book rack is given over to picture books (5 Minute Dinosaur Stories and such). Gogoi has a four-year-old son and a daughter born just a few months ago.

In November last year, the Congress MP had lost his father, former Assam chief minister Tarun Gogoi, right in the middle of an election campaign.

You can sense he's been through an emotional whirlpool (through our meeting, he refers to his father in the present tense), although he appears calm and reflective.

We choose our respective poisons. He asks for black coffee, an interesting choice considering he represents a state that produces some of the strongest, most potent tea in the world.

I ask for tea, hoping it will be Assamese, and get exactly that -- a thick, dark, fragrant potion, strong enough to knock your socks off.

Gaurav Gogoi is cosmopolitan, but also desi. He went to St Columba's School in Delhi and studied engineering at university.

He took two additional subjects: Tennis and dancing. He's learnt not just ballet, but salsa, jazz and more traditional forms like the waltz and the tango.

I'm goggle-eyed: It's hard to imagine the dapper young man in khadi before me bending back at the waist, a rose clamped in the mouth.

He is also a choreographer and when he has the time, puts events together for family weddings.

The black coffee habit presumably dates back to his days in the US where he studied and worked -- and met his wife to be when both were working at the UN.

He returned home and took up a job with Airtel, but gave it up to start an NGO, finally easing into politics.

After a three-year long-distance courtship, he married his English wife, Elizabeth, in 2013. IMAGE: Congress MP Gaurav Gogoi, along with others, carries the mortal remains of his father Tarun Gogoi from the Gauhati Medical College Hospital to his residence, in Guwahati. Photograph: PTI Photo

We all love our significant other. But I ask him what he likes most about his wife. "Her kindness," he replies without hesitation. "And her simplicity, independence."

Elizabeth's area of interest is the environment and climate change. She has worked in the EU, US and Africa. When the couple got married, Gogoi plunged straight into the election and put their honeymoon off until after the result was declared -- to finally spend it in Namibia.

Gogoi says he and his wife share political beliefs -- a more just society, equality and fairness for everyone.

"We both have our careers; we spend more time apart than together, but we've made it work," he says.

I ask him about the other supposed 'son' Tarun Gogoi had: Himanta Biswa Sarma, ambitious and impatient, who cited the rise of Gaurav to quit the Congress and join the Bharatiya Janata Party.

Didn't it seem like a stab in the back? "My father knew politics could be cruel," Gogoi says, "and I never thought he took it (Sarma's defection) to heart."

"Mr Sarma wanted to be chief minister and while in the Congress, did not think he could secure the position," he says.

"He said his political ambitions were not realised in the Congress. But those ambitions, the BJP is not ceding either. So there must have been other reasons for his defection," he says, adding, "I asked him at a meeting: 'I can publicly declare that I will stand with the Congress whether it wins elections or loses them. But can you take a similar oath?' He (Sarma) has avoided replying."

I ask him about the Congress's view of the All India United Democratic Front (AIUDF), a party formed to safeguard the interests of Muslims of immigrant origin.

The two groups are contesting this assembly election together, though for a long time, Tarun Gogoi was the man preventing the alliance.

Patiently, Gaurav Gogoi corrects me. His father, he says, was the earliest proponent of the alliance.

In fact, the Rajya Sabha seat from Assam (2020) was contested by an Independent whom the Congress and the AIUDF jointly supported.

"The Citizenship (Amendment) Act was the pivotal moment: It united different beliefs to save Assamese culture and identity," he says, adding that the Mahajot in the assembly election represents the grand alliance -- the Congress and AIUDF plus the Left of every shade. So what are the central issues in the assembly election? "Unemployment, mismanagement of the economy, inflation, lack of infrastructure," says Gogoi, instantly. I'm flummoxed by the answer.

"Oh," I say blankly. "Not religion, race and citizenship?"

"We believe unemployment is a great danger. There is extensive frustration at economic inequality. The rich are getting wealthier, the poor, poorer. The Congress appreciates every community in Assam and they know this. But there are more young people in Assam who are unemployed than possibly anywhere else," he says, adding, "The parents have spent money to educate the children. Now, there are no jobs. In situations like this, crime becomes lucrative."

This is interesting: We've heard of an overall leftward swerve of the Congress. Here is concrete evidence that at least in Assam, to the Congress class matters more than race.

I ask him about the National Register of Citizens, a project the government has told Parliament it has put off for the time being.

"Well, the CAA rules are yet to be finalised. So when the government says it has passed a law to protect those in the neighbouring countries facing religious persecution, it is making a statement that is false."

There has recently been a great deal of ferment in his party on the leadership, what with people writing letters and demanding a more active full-time president.

I am curious to know which side of the fence Gogoi is on. He evades an answer -- "Since August, I have been at home, looking after my father. I'm out of it. You probably know more than me" -- and smiles.

Gogoi is deputy leader of the Congress in the Lok Sabha -- at 38, possibly the youngest ever to be appointed to the job.

Kaliabor is a family borough -- his father and his uncle have held it before him. But he has won the seat twice in the face of a Modi wave.

The Tarun Gogoi legacy smoothed his political path. But now, he is conscious he has to make his own road. 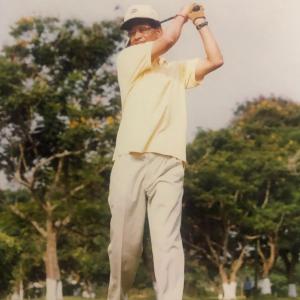 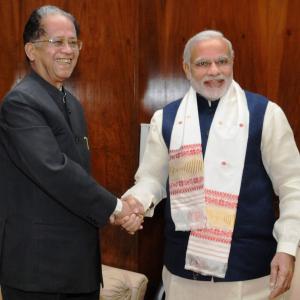