As the news of former Assam Chief Minister Tarun Gogoi's demise broke, leaders across the political spectrum paid tribute to the Assam leader. 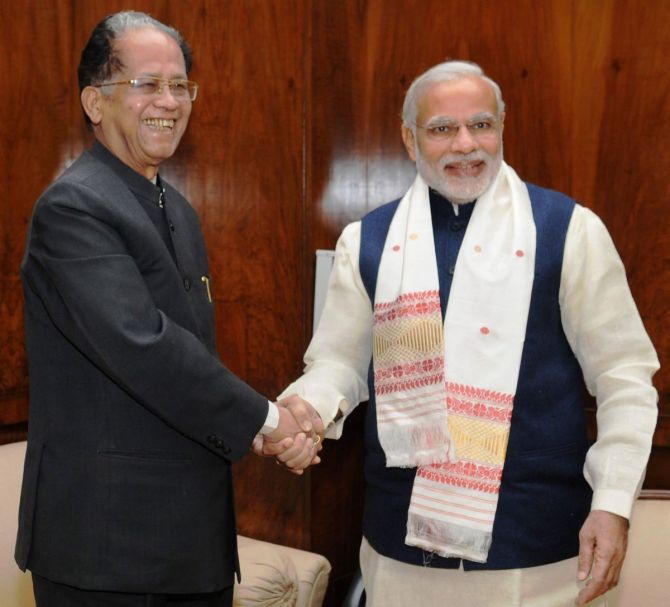 "Shri Tarun Gogoi Ji was a popular leader and a veteran administrator, who had years of political experiencein Assam as well as the Centre. Anguished by his passing away.

"My thoughts are with his family and supporters in this hour of sadness. Om Shanti," Modi said on Twitter.

President Ram Nath Kovind on Monday condoled the demise of Gogoi and said his passing away marks the end of an era.

His long tenure in office was a period of epochal change in the state, the president said.

"Extremely sad to know of the demise of Shri Tarun Gogoi, former Chief Minister of Assam. The country has lost a veteran leader with rich political and administrative experience. His long tenure in office was a period of epochal change in Assam," Kovind tweeted.

He will always be remembered for the development of Assam and especially towards his efforts to improve law and order and fighting insurgency in the state, he said in another tweet.

"His passing away marks the end of an era. In this hour of grief, condolences to his family, friends and supporters," the president said.

Vice President M Venkaiah Naidu on Monday too condoled his death and said his contribution to public service will always be remembered.

"I am saddened by the death of former Assam chief minister and former Union minister Tarun Gogoi. In his long public life, he has faithfully served the people of the nation and the state in various capacities," the Vice President Secretariat tweeted quoting Naidu.

Congress leader Rahul Gandhi described Gogoi as a "great and wise teacher" who devoted his life to bring people and communities of Assam together.

Gogoi was a true Congress leader and will miss him, Gandhi said.

"Shri Tarun Gogoi was a true Congress leader. He devoted his life to bringing all the people and communities of Assam together. For me, he was a great and wise teacher. I loved and respected him deeply," he tweeted.

"I will miss him. My love and condolences to Gaurav and the family," Gandhi said.

A host of other Congress leaders also condoled Gogoi's demise, with Leader of the Opposition in Rajya Sabha Ghulam Nabi Azad saying he was a capable administrator and a strong pillar of the Congress in Assam.

"Deeply saddened on the demise of veteran Congress leader Sh Tarun Gogoi. He was CM of Assam thrice and Lok Sabha member for 6 terms. A soft spoken person and a capable administrator he was a strong pillar of Congress in Assam and devoted his whole life in the service of people. RIP," he tweeted.

Senior Congress leader Jairam Ramesh hailed Gogoi as the one who rescued Assam from bankruptcy and transformed the state during his 15 years as chief minister.

"Tarun Gogoi who rescued Assam from bankruptcy in 2001 and transformed the state during the 15 years he was CM, is sadly no more. He was a wonderful man, full of energy and ideas till the very last. I have many fond memories of working closely with him. He will be missed," Ramesh tweeted.

Congress general secretary Priyanka Gandhi Vadra said, "Tarun Gogoi ji was the popular voice of Assam. A hard working Congress leader who devoted his entire life in serving the people of Assam and establishing love among them. My humble tributes. My condolences to Gaurav Gogoi and his family."

"Saddened to hear about the passing away of veteran leader and former Chief Minister of Assam for 3 terms, Tarun Gogoi Ji. My deepest condolences to his family, followers and well-wishers," Banerjee tweeted.

Union Home Minister Amit Shah on Monday expressed anguish over the death of former Chief Minister of Assam Tarun Gogoi and conveyed his condolences to the bereaved family.

"Anguished to learn about the passing away of veteran leader and former Chief Minister of Assam, Shri Tarun Gogoi ji. May almighty give his family the strength to bear this tragic loss. My condolences with his family and followers. Om Shanti Shanti Shanti," Shah tweeted.

Congress president Sonia Gandhi on Monday described former Assam chief minister Tarun Gogoi as one of the tallest leaders of the party who was admired and respected for his extraordinary wisdom, vision and ability as she condoled the demise of the veteran leader.

Sending her condolences in a letter to Gaurav Gogoi, the son of Tarun Gogo, Sonia said the Congress party will always honour his memory.

"Shri Tarun Gogoi was one of the tallest leaders of the Congress party, admired and respected for his extraordinary wisdom, vision and ability. With his long years of experience as an MLA, an MP, a Central Minister and Chief Minister of Assam, he was someone to whose unfailingly wise counsel and advice we could always turn to," the Congress chief said.

"For me, his loss is also a deeply personal one -- I cannot forget the warmth and care he showed on me on my many visits to Assam. During those visits, I saw how loved he was by all the many communities and people of Assam, how much he had done for them, and for their progress and welfare. No wonder he was Assam's most universally loved and venerated public figure and the longest-serving Chief Minister of the state," Gandhi said.

The Congress chief said Gogoi's life was cut short by the cruel pandemic, but he leaves a precious and lasting legacy in the standards he set and in his immense contribution to national life.

"The Congress party will always honour his memory," she said.

Former prime minister Manmohan Singh on Monday described ex-chief minister Tarun Gogoi as one of his dearest friends from Assam and said the country has lost a very good leader who always worked for the betterment of the poor and downtrodden.

In his condolence message to the former chief minister's wife Dolly Gogoi, Singh said he was the most popular leader from Assam who had a pleasant nature.

"I was deeply shocked and saddened by the untimely passing away of your beloved husband Shri Tarun Gogoi ji. He was one of my dearest friends from the state of Assam.

"Shri Tarun Gogoi ji was the most popular leader from Assam who served six terms as a member of Parliament and has led the party to a record three consecutive electoral victories in the state of Assam as chief minister," Singh said in his letter.

"With his hard work, pleasant nature and popularity, he became one of the tallest leaders of the state, who led the Congress party in Assam for a long time. In his death our country, especially the state of Assam, has lost a very good leader who always worked for the betterment of the poor and downtrodden people of the society," the former prime minister said.

"We pray to the Almighty to give all of you the strength to bear this great loss with courage and fortitude," he said. 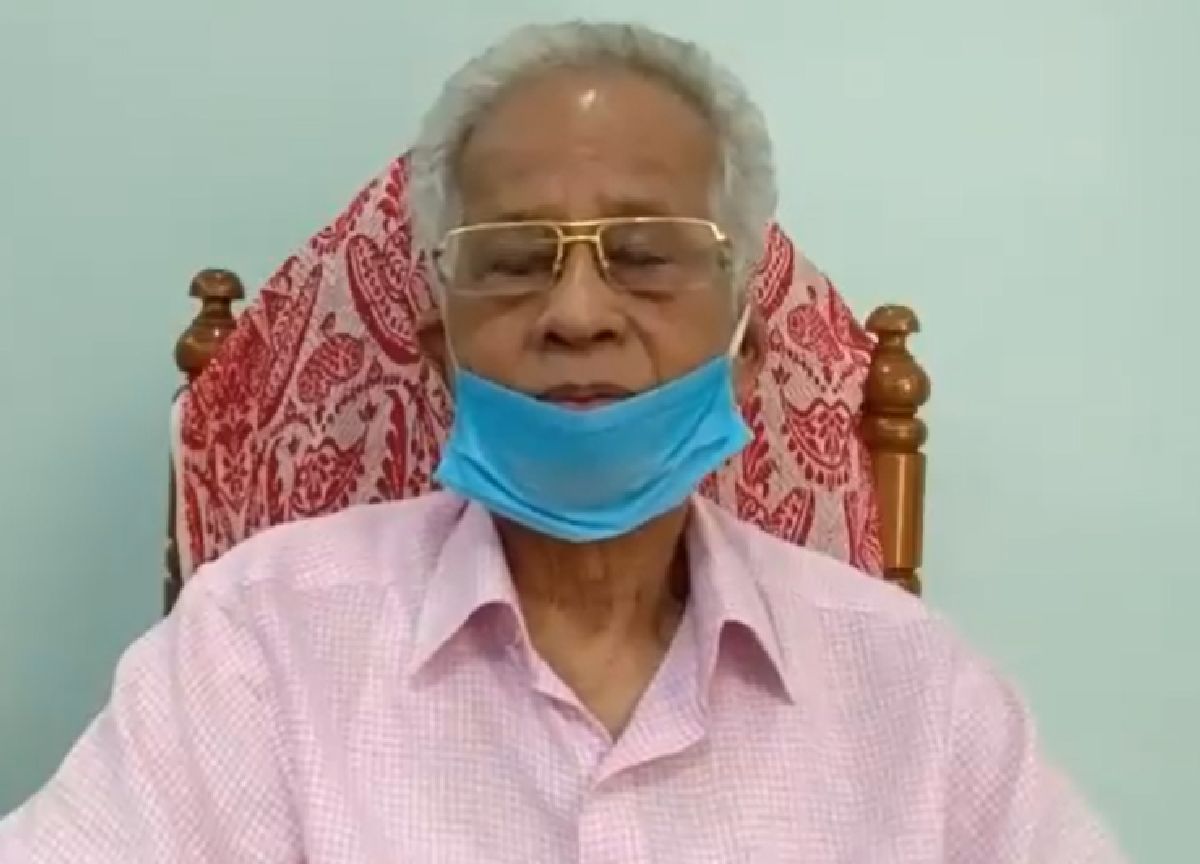 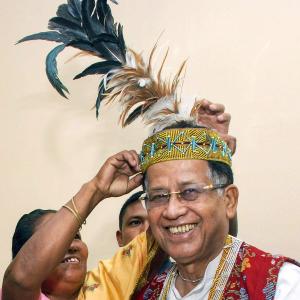