How has Raj Thackeray, who is as much a businessman as politician, been able to pull it off, when most Opposition politicians live in fear of IT and ED and CBI, asks Krishna Prasad after attending a Raj rally in Nashik. IMAGE: The stage of the MNS rally. Photograph: Krishna Prasad

There has been plenty of weird stuff in General Elections 2019, but none weirder than the sight of a political leader whose party was not contesting, drawing bigger crowds than those who were sweating the good sweat.

Even more bizarre was the spectacle, and a spectacle it has been, of thousands falling over each other to hear in their own ears, from the dour-faced man, that they have been had, taken for a royal ride -- fooled! -- by a 'Mouth ka Saudagar' whom they might, perhaps, vote in again.

Raj Thackeray is without doubt Indian journalism's big loss -- a stand-out cartoonist far superior than many earning their zunka-bhakar, puttu-kadala or macher-jhol in newspapers and magazines.

His illustrations bear a likeness to the great David Low who inspired his uncle Bal Thackeray. His lines hit below the 'lada'. But even his most acerbic caption might not capture the caricature he has sketched of Narendra Damodardas Modi and Amit Anilchandra Shah in town after Maharashtra town.

In the 20th century, when his delicate fingers hadn't yet become synonymous with strong-arm tactics, there was a time when Raj Thackeray could have been mistaken for Chunky Pandey. Not in the 21st; not after the 'bhaiyyas' in Mumbai discovered he ain't.

Today, when he stands on stage, he looks like someone who has slipped out of his own cartoon. An antiquated steam engine (the symbol of his Maharashtra Navnirman Sena) forms the backdrop. Spectacles that were in the vogue in the 1970s. Those droopy eyes. That phlegmatic face. A 'jubba'.

Uncle T could at least crack a joke, break into a smile, share a beer. But if you aren't in love with Modi, as 69% of India wasn't in 2014, the three most affectionate words you could hear during the 2019 election campaign have been: 'Laav re video' (Marathi for play the video).

That's when Raj Thackeray's massively open, offline lec-dem begins. And for over an hour and more, he keeps his audience engaged with photos, graphics, headlines and videos of the mountain of lies on which Modi stands.

All played on giant LED screens, interspersed with barbs, jibes and impeccable logic.

"In my entire life, I haven't seen such a liar-prime minister," Thackeray thunders in his deep baritone. "A liar lying to each one -- and about everything."

There is some irony here, in that Thackeray, who was doing pious Modi 'bhakti' in 2014, is himself questioning the presiding deity ("I was misled by IAS-IPS officers," he claims weakly. "If the man can change, so can I").

But the bigger paradox is that someone who is very much a part of the Hindutva hit mob is now taking the moral high ground, lashing out at the lies and lynchings.

Notwithstanding that, it is gripping politics and the people are loving it.

Saam TV, the Marathi channel owned by the Sakal group, had the highest TRPs between 8.30 and 9.30 pm when it showed the last rally live from Nashik.

At one level, Raj Thackeray is showcasing the art of speech-making when the meme is the message -- fewer and fewer people attend political rallies these days because they are aired on electronic or social media; because the speeches are dry, formulaic and time-consuming; because the middle-class has better things to do on summer evenings.

Go to a Rahul Gandhi rally, for instance, and what you get is a torrent of bullet points, all very transactional. 'Main aap ko NYAY dilavoonga,' Gandhi says, blithely oblivious to the fact that half the country might not catch the pun hidden in the Hindi acronym for the Congress's promise of a Rs 72,000 minimum income.

At a Modi rally, as the 14th PM flails wildly at imaginary ghosts of the first and sixth, people walk out, muttering 'Chowkidar Bore Hai'.

In Raj T's, they come in thousands and stay glued. It's information and entertainment, no strings attached. At another level, what Raj Thackeray is doing is what every good newspaper, news channel and news journalist ought to be doing as a matter of course -- using their bullshit-detectors to check Modi's fantastic claims, holding his government to account, and reminding citizens of it -- rather than acting as his sleeper cell, home-delivering incendiary, low-grade IEDs without context or filter.

It may not have been his intention, but Thackeray has shown that it isn't enough for 'netas' to just speak in the new age, not enough to just 'tell' -- you need to 'show', and show it repeatedly.

"Go home and watch it on YouTube," Thackeray says of Kapil Sibal's allegation that the PMO was involved a massive money-laundering scam during demonetisation, involving a R&AW officer of Maharashtrian origin.

And without beating around the bush of propriety, Thackeray has shown that with a little bit of ingenuity, the BJP's lung power can be easily met by one who goes lower.

How has Raj Thackeray, who is as much a businessman as politician, been able to pull it off, when most Opposition politicians live in fear of IT and ED and CBI? It's probably because MNS cadres can match the thuggishness of BJP bhakts, blow for blow.

When a BJP supporter called Thackeray a 'desh drohi' on his Facebook page, MNS men landed up at his house to read out the rules. Message conveyed.

If your WhatsApp group has convinced you that Indian civilisation dawned only in 2014, you might as well believe that it is his own money that Thackeray has spent to hold these jamborees that cost a bomb.

And you might as well believe that Thackeray's objective is not to help Congress or the Nationalist Congress Party, and that he is merely looking at the assembly elections due in a few months's time.

Since there are no buyers for modesty in a free-market economy, Raj Thackeray, the unapologetic parochialist, has convinced himself that he is performing the role towering Maharashtrian intellectuals like Pu La Deshpande and Durga Bhagwat did during the Emergency: Contributing their mite to speak out against an oppressive authoritarian.

But if he dug deep, Raj Thackeray, the cartoonist, might find a more apt parallel with David Low.

At the London Evening Standard, where he served for 23 years, Low did a special comic strip called 'Hit and Muss' before and during World War II, in which he lampooned Hitler and Mussolini.

When Lord Beaverbrook thought it too strong, the cartoonist, in the sacred cause for peace with the paper's owner, created a new cartoon character, his own private dictator called 'Muzzler'.

Thackeray doesn't do nuance like Low. "Modi says he built 850,000 toilets in Bihar one week. That's roughly 1.5 toilets per second. We can't even go to the toilet in that much time."

The elections in Maharashtra and Raj Thackeray's rallies are over. But with the last two phases of polling still pending in the heartland, the UP 'bhaiyyas' and Biharis who are due to vote might like to hear what their bugbear in Bombay has been saying about the 'Pradhan Muzzler', whose voice he says sounds like a Formula One car revving up with the brake on.

1. "The Lok Sabha election is not a contest between political parties. It is a fight between Modi-Shah, and the country. Only when these two people are removed, will it be a proper contest between parties."

2. "Let Rahul Gandhi become PM if he can. We experimented with Narendra Modi and look where we have landed. Let's experiment with Rahul Gandhi, or anybody. It can't be worse than this."

3. "For 13 years when he was Gujarat's chief minister we didn't even know Narendra Modi's mother was alive and around. Now he poses with her before every election."

4. "All day Modi blames Pandit Nehru and still calls himself 'pradhan sevak'. Do you know that it was Nehru coined the term 'pradhan sevak'? You will find it in Teen Murti Bhavan. "

6. "Modi created the impression that he was ready to go to war with Pakistan after the Pulwama attack. But his government was so broke it was begging the RBI for Rs 300,000 crore."

7. "Modi says his life is in danger, his opponents are out to destroy him. The same man stands in front of the pictures of the 40 slain CRPF men and says the country is in safe hands. How can we believe this man?"

8. "Before he was elected, Modi said he would bring back black money and give out 5%-10% gift to the middle-class as a 'gift'. And his own president admits that it was just an election 'jumla."

9. "If cows are being killed by beef-eaters, then who is giving the milk? If Modi's own 'Jain friends' are in the beef export business, why didn't he stop the lynchings in the name of cow slaughter? Why didn't he speak up after Dalits were beaten up in Una?"

10. "When DeMo was being announced, he took away the phones of Cabinet ministers so that they wouldn't inform anybody. TV is gagged, newspapers are muffled. This is exactly Adolf Hitler did."

11. "He doesn't trust anybody. He doesn't any institution. He doesn't even attend the Lok Sabha. That's why BJP MPs are lined up in NCP leader Sharad Pawar's house. Modi says whenever he is in a dilemma he calls up Pawar."

12. "Modi pleaded for 50 days for DeMo to succeed. After that, he said he was ready to face all consequences. 4.5 crore people have lost jobs. 50,000 families have been ruined by the suspension of Jet Airways alone. Now tell me the place where he should face the 'consequences'."

13. "Before he became PM, Modi was against Aadhaar saying it would allow terrorists to infiltrate. Now he proudly says 96% of the country's population has Aadhaar."

14. "14,000 farmers have committed suicide in Maharashtra, and Modi's agriculture minister Radha Mohan Singh has the temerity to suggest these farmers were addicted to drugs."

15. "When our jawans fire at and kill a car driver for breaking through the barricades, Modi talks proudly of setting up a panel and suspending them."

16. "Media freedom has been gagged. Modi not addressed a single press conference in his entire five-year term. If he won't answer the media, how will he be answerable to you?"

17. "Modi wants first-time voters to vote in the name of the CRPF martyrs in Pulwama. But he says businessmen are more courageous than soldiers. Has he no shame?"

18. "Modi talks about the success of the 'Ujwala' LPG scheme. And then he talks about the ingenuity of a 'chaiwala' whom he saw putting a stove above a gutter to make tea."

19. "Modi grandly talks of 120,000 wells being opened in Maharashtra. Has any journalist gone to check these claims?"

20."Sui Daga and Padman and Toilet: Ek Prem Katha and many other films are basically government propaganda, just like Adolf Hitler did"

21. "People don't have water to drink in the villages, he wants to start a bullet train between Mumbai and Ahmedabad. What's the hurry? To go and eat dhokla?"

22. "Modi and Shah are insulting Maharashtrian heroes like Hemant Karkare, Ashok Kamte and Vijay Salaskar who were killed in the 26/11 siege of Bombay by putting up Pragya Singh Thakur in Bhopal."

23. "Modi says nobody from the "Congress family" visited Bhagat Singh in jail. Which "Congress family"? Sardar Patel's? Maulana Azad's? Sarojini Naidu's? No, the Nehru-Gandhi family. Nehru went to meet Bhagat Singh more than once. Indira Gandhi was 14. Rajiv, Sanjay, Sonia, Rahul, Priyanka were not even born at the time. So why does he talk of irrelevant things?" 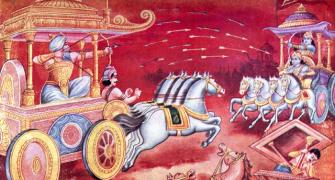 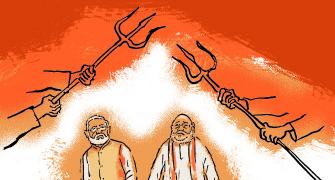 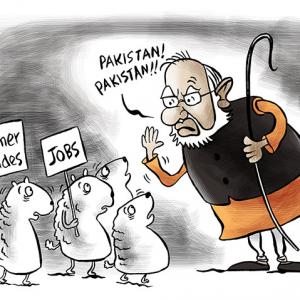