News
Business
Movies
Sports
Cricket
Get Ahead
Money Tips
Shopping
Sign in  |  Create a Rediffmail account
Rediff.com  » News » What Modi and Shah must worry about

'If the BJP becomes the new Congress, then an Opposition within will naturally emerge -- from the right, not the left,' points out Mihir Sharma.
Illustration: Dominic Xavier/Rediff.com 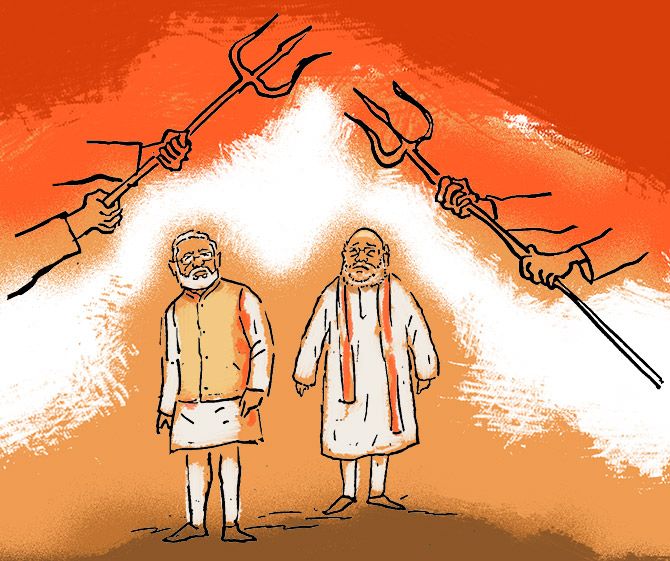 It seems an old and insightful joke about the Bharatiya Janata Party is still in operation.

The joke is sometimes expressed as a cartoon, sometimes in words: But essentially the punchline is that every extremist in the BJP becomes a moderate in time.

Not by changing their views, but simply because they are all inevitably displaced from their place on the far right when someone even more extreme pops up to attract attention.

Note the progression: Vajpayee spoke words that could lead to riots, but he was always far away from the actual events that would spark them, such as the Babri Masjid demolition.

Advani was present at the events, but reacted to them with public shame rather than pride.

Modi instead responded to such events with defiance and pride, as in the election campaign after 2002.

Step by step, ever more extreme.

Many supposed the next step in this sequence would be Amit Anilchandra Shah.

Modi's rhetoric may have been dangerous back in the 2000s, but at least he was never seriously accused of homicide.

Shah was famously so accused (and then acquitted six months after Modi took power).

The prime minister has spoken of needing a '56-inch chest' to defend India; but it is the UP CM who brings with him a palpable aura of danger -- not surprising given that he emerged from the politics of eastern UP, and that he long had his own stormtroopers in the Hindu Yuva Vahini.

They have, in one fell swoop, rendered Bisht also a moderate, by handing the historically safe seat of Bhopal to Pragya Singh Thakur, accused of terrorism but currently out on bail due to her poor health.

The formal allegations against Bisht are essentially those of intimidation and retail violence; those against Thakur are worse by an order of magnitude.

The UP CM has carefully sought to talk more about development even while his government shuts down slaughterhouses and promotes bottled cow products; the likely MP for Bhopal openly claims, on national television, that panchagavya

The amazing thing about religious extremism is that there is always somewhere more extreme to go.

I wonder who will eventually be found that will make Thakur look like a restrained and sensible moderate.

So why? Why does the BJP constantly shuffle rightwards in this manner? There are at least two different answers, neither very reassuring.

First, perhaps the 'real' BJP is always to the right of what its leadership openly states.

This is what Govindacharya once implied when he said Vajpayee was the mukhota or face of a party that actually looked to Advani for leadership.

Thus, the purpose of a particular leader is only to shift what political scientists call the Overton window -- the set of publicly acceptable ideas -- further right towards the party's core ideology.

This is not a pleasant thought, because it suggests that a certain duplicity and equivocation is built into how the BJP operates.

But, on the other hand, it assumes the public at any point in time is in fact more moderate than these theoretical BJP 'core beliefs', and would get turned off if they were expressed in plain terms.

The second possibility is that the BJP is merely reacting to a rightward shift in the Indian public itself, or at least of the median voter in its core electoral base, namely India's northern and western states.

This is the point of view that supposes that Modi himself was not overjoyed to install Bisht as UP CM, but his hand was forced by the latter's popularity among crucial elements of the population and also among Hindutva's foot soldiers.

Those familiar with UP in particular will tell you that elements of the Rashtriya Swayamsevak Sangh and even of the Hindu Mahasabha feel that they are losing control of many of their foot-soldiers, who prefer a more direct and confrontational style in local politics.

This suggests the worrying possibility not that Prime Minister Modi is playing at being a moderate, but that, at this point in time, he genuinely occupies the political centre in north and west India.

For those from more liberal traditions, therefore, it is easy to collapse all strains of the BJP and of Hindutva into one -- and, of course, they are all likely to damage national cohesion and Constitutional values.

But given that Hindutva nationalism is now the dominant strain of politics in a large swathe of the country, this is poor political analysis.

The BJP's leadership is in constant danger of being outflanked on its own right.

If the BJP becomes the new Congress, a single party dominating the politics of a large part of the country, then an Opposition within will naturally emerge -- from the right, not the left.

It is that which should worry Modi, Shah and the RSS. 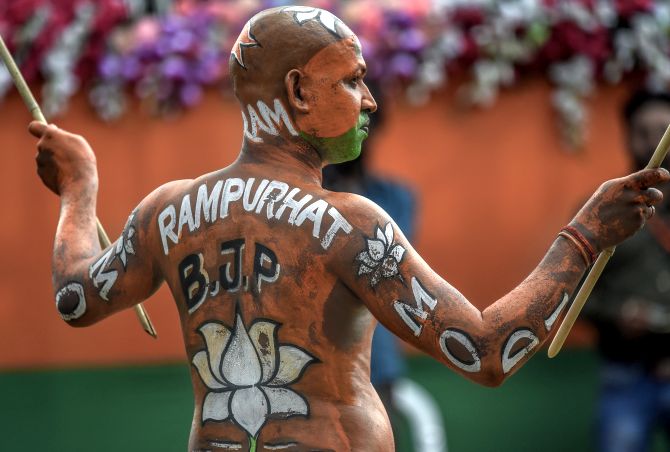