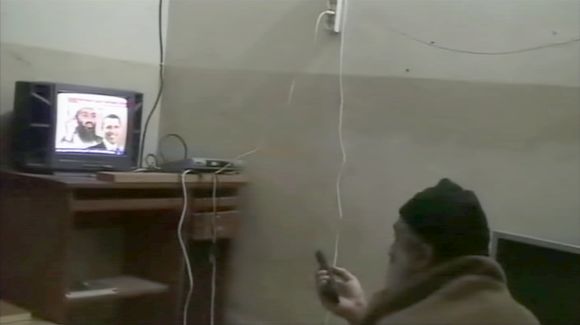 Image: Video frame grab of Osama bin Laden watching him on television in videos at his Abbottabad compound released by the Pentagon
Photographs: Handout/Reuters Amir Mir in Islamabad

The May 2 raid was conducted only after the Americans got hold of credible and actionable intelligence about the identity of the high value target from a senior ISI official, ultimately killing the world's most wanted terrorist, reports Amir Mir

Although the Pakistan army has strongly rejected a recent revelation by WikiLeaks that slain Al Qaeda chief Osama bin Laden was in routine contact with several officials of the Inter Services Intelligence while hiding in his Abbottabad compound, which was hardly a kilometer from the Kakul Military Academy, there is plenty of evidence to imply that some key officials in Pakistan's military and intelligence establishment indeed knew of his hideout.

And the crucial information leading to the May 2 Abbottabad raid was provided to the Americans by none other than a senior ISI official.

The strange discovery that the world's most wanted fugitive terrorist had been living in a custom-built luxury complex in the garrison town of Abbottabad since 2005, only 800 yards from the prestigious military academy and hardly 50 kilometers from capital Islamabad, had simply stunned the international community, raising some serious questions about the frequent claims made by the Pakistani security establishment that Osama bin Laden was not sheltering in Pakistan. 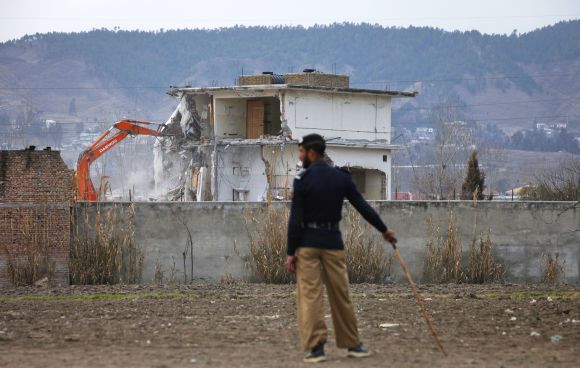 Image: A policeman looks on as the building where bin Laden was killed is demolished in Abbottabad
Photographs: Faisal Mahmood/Reuters

While presiding over an emergent meeting of the Corps Commanders on May 4, 2011, the country's extremely embarrassed Army Chief General Ashfaq Kayani had ordered a high-level investigation into the conspicuous intelligence failure of the ISI in detecting the presence of Al Qaeda chief in his Abbottabad hideout; and also to determine as to how the US Navy Seals carried out the operation Geronimo without Pakistani military and intelligence establishment getting wind of it.

However, ten months down the road since the May 2011 US raid, no such investigation report has been made public by the military authorities.

The Pakistani security establishment faced numerous questions in the aftermath of the Abbottabad raid, with almost everyone wondering how it was possible for bin Laden to live unnoticed at the doorway of the Kakul Military Academy in a vast compound for years, and that too, without any support system.

But instead of answering these queries, the military authorities demolished the bin Laden compound on February 28, probably because it was an embarrassing reminder of their incompetence as well as their alleged complicity.

It may be a coincidence, but bin Laden's compound was razed the day a US-based global intelligence firm (Stratfor) reported while citing WikiLeaks, that middle to senior-level officials in the Pakistani military and the ISI knew the arrangements made for bin Laden at his Abbottabad safe house.

US intelligence knew it all? 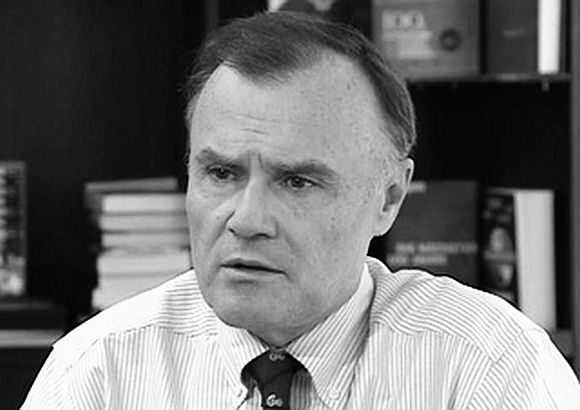 "Mid-to-senior level ISI and Pak military, with one retired Pak military general, had knowledge of the OBL arrangements and safe house," wrote Fred Burton, Stratfor's vice-president for intelligence in an e-mail message which was leaked by WikiLeaks to his company's regional director for South Asia (Kamran Bokhari), soon after the May 2 Abbottabad raid.

The email went on to say that the names and specific ranks of these generals were unknown to the writer, but added that the US intelligence may have that information.

Burton, one of the world's foremost experts on security, terrorists and terrorist groups, however, did not reveal his source, but did say that the source was based in Pakistan.

Burton's email did not name the officials involved, but added that the US could use the information as a bargaining chip in post-raid negotiations with Islamabad, which had rebuked Washington after the raid.

The information leaked by WikiLeaks through Stratfor suggested that up to 12 officials in the ISI knew of the OBL safe house. 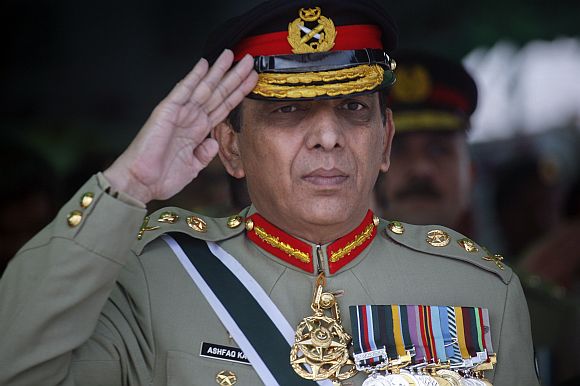 Interestingly, Lt Gen Nadeem Taj, who was a close relative of General (retd) Pervez Musharraf, was the head of the Kakul Military Academy in Abbottabad before being elevated as director general of the ISI.

Also, General Kayani had visited the Kakul Academy on April 23, 2011, nine days before Osama's killing. The incumbent ISI chief Ahmed Shuja Pasha had conceded his failure in the aftermath of the May 2 episode and offered his resignation during a joint session of the Parliament as he failed to defend the role of the spy agency. Yet, he was allowed to continue as ISI chief.

However, the spokesman of the Pakistan army, Major General Athar Abbas, was quick to refute the Wikileaks claim about bin Laden's alleged links with some ISI officials, terming it 'rubbish'.

Denying allegations about contacts between Pakistani intelligence officials and Osama bin Laden, the army spokesman said: "It is simply rubbish and mischievous and tantamount to kite flying; much farther from the truth. The so-called leaks issued by a private US agency stem from nothing but baseless fabrication. These kinds of charges are not new. These leaks are actually old wine in new bottle", Athar Abbas added.

Yet, the army spokesman has not yet refuted a February 18 Washington Post article (by David Ignatius), claiming that an architect regularly employed by the ISI worked on the compound in which bin Laden sheltered for years in Abbottabad.

Quoting intelligence sources, the writer claimed that the architect reportedly was told that a highly placed VIP was coming to the compound.

According to David Ignatius, any probe on Osama bin Laden's presence in Pakistan should focus on several issues, including how the Al Qaeda chief came to Abbottabad in 2005 and what Pakistani officials knew about his whereabouts.

The Washington Post article also added: "Current Army Chief General Ashfaq Pervez Kayani was ISI chief at the time, but the dominant figure was President (General) Pervez Musharraf. The commander of the PMA (Pakistan Military Academy at Kakul) in Abbottabad from 2006 was Lt Gen Nadeem Taj, who succeeded Kayani as head of the ISI in 2007".

Ignatius referred to former ISI chief General Ziauddin Butt's claim that the Abbottabad compound was used by Intelligence Bureau and noted that a report in the Pakistani press in December had quoted him as saying that Osama's stay at Abbottabad was arranged by Brigadier (retd) Ijaz Shah, head of the Intelligence Bureau during 2004-2008, on Musharraf's orders. General Ziauddin Khawaja, also known as Ziauddin Butt, headed the ISI from 1997 to 1999.

An ISI brigadier the missing link 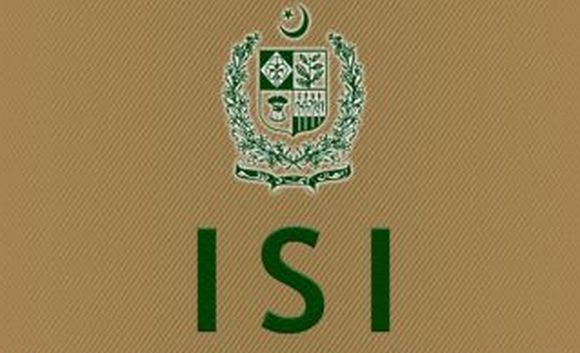 General Ziauddin Butt repeated his claim in the February 2012 issue of the Newsweek magazine, in an online interview conducted by Bruce Riedel.

Riedel quoted Lt Gen Butt as saying: "General Musharraf knew that Osama bin Laden was in Abbottabad and his IB chief Ijaz Shah had hired the bungalow for the fugitive Al Qaeda leader."

A four star general, who was the first head of the army's strategic plans division which controls the nuclear weapons, Ziauddin claimed that Ijaz Shah was responsible for setting up bin Laden in Abbottabad, ensuring his safety and keeping him hidden from the outside.

On the other hand, Musharraf has refuted having any knowledge about Osama living in Pakistan during his tenure.

However, well-informed intelligence circles in the garrison town of Rawalpindi concede that the vital information about the bin Laden compound was actually provided to the Americans by none other than a senior ISI official -- a brigadier who is now well settled in the US after having claimed $25 million reward from US state department's Rewards for Justice program.

The brigadier, who has already been granted US citizenship along with his family members, reportedly persuaded Dr Shakil Afridi, a Pakistani physician, to conduct a fake polio campaign in the Bilal Town area of Abbottabad to help the US Central Intelligence Agency hunt down Osama.

The doctor has already been declared a national criminal by a Pakistani judicial commission, which is probing the US raid in Abbottabad.

According to the Pakistani intelligence circles, the Americans actually came to know of the fugitive Al Qaeda chief's location in the third quarter of 2010, after the brigadier left Pakistan and approached an American embassy abroad.

The CIA subsequently set up a safe house in Abbottabad to monitor the OBL compound, eventually concluding that some high value target was hiding there, along with an extended Arab family.

The May 2 raid was conducted only after the Americans got hold of credible and actionable intelligence about the identity of the high value target, ultimately killing the world's most wanted terrorist.