News
Business
Movies
Sports
Cricket
Get Ahead
Money Tips
Shopping
Sign in  |  Create a Rediffmail account
Rediff.com  » News » Pak has no basis for holding up doc who helped nab Osama: US

Pak has no basis for holding up doc who helped nab Osama: US

Source: PTI
Last updated on: March 01, 2012 15:08 IST
United States Secretary of State Hillary Clinton has said that there is no basis for Pakistan to hold up Dr Shakeel Afridi, who helped the US in nabbing Osama bin Laden, the al Qaeda leader. "I agree that there is no basis for holding Dr Afridi or any of his staff," Clinton said at a Congressional hearing on Wednesday.

"In fact, I think his work on behalf of the effort to take down bin Laden was in Pakistan's interest, as well as the US's interest. We have made that view very well known. We will continue to press it," she said. "And you know, it is going to be taken into account as we move forward," Clinton said indicating that the US is closely watching how Dr Afridi is being treated by Pakistan.

Clinton was responding to questions from Congressman Dana Rohrabacher, who recently introduced a resolution in the House of Representatives to give the rare Congressional Gold Medal to Dr Afridi. "If they do not let Dr Afridi go -- let me just put everybody on notice here and I believe that we're going to be watching this closely -- there is nothing that could suggest that Pakistan is cooperating with us in the fight against terrorism when they have Dr Afridi -- the man who helped us get Osama bin Laden -- in prison and are treating him this way. That is their decision of non-cooperation," Rohrabacher said.

Rohrabacher said it is now illegal for the government of Pakistan to receive any aid money from the US unless the Secretary of State certifies that Pakistan is cooperating with the United States in counterterrorism efforts and preventing terrorists from basing their operations in Pakistan.

"Well, of course, the one Pakistani who did cooperate with us was Dr Afridi, who was the medical doctor who helped provide the information that led our Navy SEALs to where Osama bin Laden was hiding," he said.

The senator said that Dr Afridi now has been arrested by the Pakistani government and is facing a treason charge, while his property has been confiscated, his office staff been fired and he's being called a national criminal by that government.

"So can you certify -- are you able to certify that Pakistan is cooperating with us as long as Dr Afridi -- the man who helped us get Osama bin Laden -- is in custody and being charged with treason," Rohrabacher asked.

Clinton, however, did not directly respond to this question. 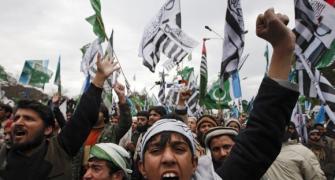 Difa-e-Pakistan Council: Another Frankenstein to irk US
N Korea to halt nuke activities for food aid 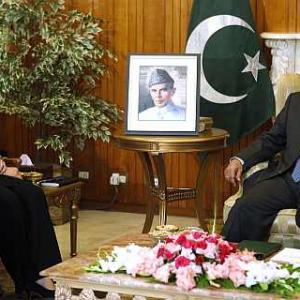