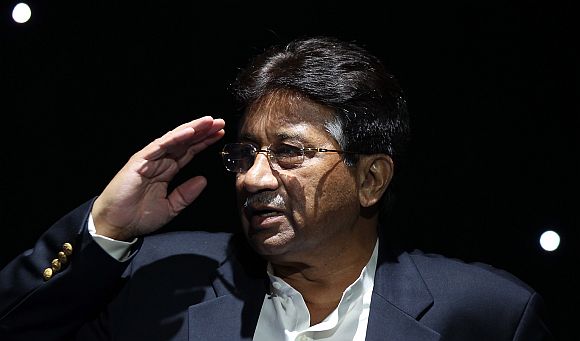 While former dictator Pervez Musharraf packs his bags to take a flight back home, his country is all ready to escort him straight to jail. Rediff.com's Amir Mir's analyses the volatile political scenario that Pakistan is staring at.

Power is a basic social phenomenon, which has interested humanity from Homer and the Greek tragedies until our day. The struggle for political power is one of the main features of history and dominant themes of literature.

However, in the case of Pakistani political elite, there is a clear reluctance to accept that their days in power are over.

While sitting in a cosy sofa at his posh Dubai flat and addressing a small gathering of his supporters in Pakistan through a video link, former dictator General (Retd) Pervez Musharraf has announced he will be returning to the country any day between January 27 and January 30, ending his almost four-year-long self-imposed exile in London.