'Worrisome' that military is being used for politics: Lt Gen Hooda

Lt Gen (retd) D S Hooda, the main architect of the 2016 surgical strikes on terror launch pads in Pakistan-occupied-Kashmir, on Thursday said it is "worrisome" that the military is increasingly being drawn into the political discourse and used to win political arguments. 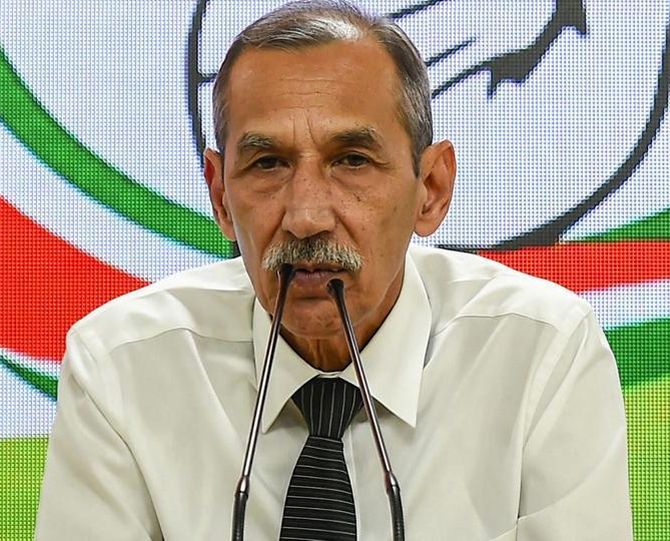 The Indian Army's former Northern Command chief also said the talk around politicisation of the military "is sort of exaggerated".

" ...the military (is) being increasingly drawn into the political discourse, it's being used to win political arguments, it's being used as something which generates success in the elections. And that frankly is worrisome," Hooda said at an event, "Dialogue on National Security", in Chandigarh.

"For example, you saw the recent debate over 'my cross border strikes versus your surgical strikes'. What ultimately happened, a document was pulled out in reply to a RTI reply... to say that look this is what the Army headquarters is saying, that's where, I think, the worry is when too much political debate starts over military," he said.

Responding to an RTI application filed by PTI, the Directorate General of Military Operations said last year that the Army did not have any records of any "surgical strike" conducted before September 29, 2016 -- the day when the raid was carried out in Pakistan-occupied Kashmir.

"So, I think, if all political parties can just leave the military out of the political discourse, that would be the best. Whether it is going to happen, I don't know because people have also tasted success using name of the military for electoral victory," Hooda said.

Lt Gen (retd) Praveen Bakshi, who was also present at the event, said politicisation of the armed forces was his "biggest fear".

"... we need to insulate ourselves and as a democracy all of us are stakeholders in preventing this part. If this (politicisation) happens, I am afraid, others are just baying for it. In fact, perhaps Pakistan's strategy is exactly this -- to politicise our armed forces. We are a multi-party democracy, how can we be politicised?" he said.

He added that the Indian armed forces have not been politicised yet, but it is at the germination stage and it may flower later.

Congress leader Rajeev Gowda, also a panelist, said national security is not just what happens at the border and is a much broader subject.

" ...it is fundamentally about our people, their security, their prospects... it is also about what happens internally in different parts of India, what happens within the economy and whether everyone is getting a chance to move forward in a manner that promotes harmony rather than discontent and division," he said.