News
Business
Movies
Sports
Cricket
Get Ahead
Money Tips
Shopping
Sign in  |  Create a Rediffmail account
Rediff.com  » News » This Winter Session, it's been all shouting and hardly any work

This Winter Session, it's been all shouting and hardly any work

With only one day left, the Winter session of Parliament is on the verge of a washout as it failed to transact any business again on Thursday due to the standoff between the government and Opposition over demonetisation, the AgustaWestland scam and some other issues.

Even on the penultimate day on Thursday, both the Lok Sabha and the Rajya Sabha continued to witness deadlock that began with the start of the session on November 16 over the manner in which a debate should be held on demonetisation and related aspects. The Rajya Sabha saw sharp exchanges between Treasury and Opposition members as they tried to outshout each other over different issues, throwing the House into pandemonium.

The Opposition, led by Congress, said demonetisation along with vagaries of weather had hit the farmers and demanded farm loan waiver to give relief to them.

On the other hand, Bharatiya Janata Party members shouted slogans while displaying copies of a news report which claimed that some people in the erstwhile United Progressive Alliance regime had allegedly received money in the AgustaWestland helicopter deal. They wanted to know who was behind the chopper scam.

Leader of the Opposition Ghulam Nabi Azad said the ruling side was not allowing Parliament to function, which was 'unprecedented'.

Azad, who had given a notice to raise the issue of distress among farmers after demonetisation, was called by the Deputy Chairman P J Kurien to speak but he could hardly make his submission as ruling party members created uproar. Union ministers too interjected as Azad rose to speak with Information and Broadcasting Minister M Venkaiah Naidu wanting to know what he wanted to say and Minister of State for Parliamentary Affairs Mukhtar Abbas Naqvi saying the members of the ruling side want a discussion on the corruption issue.

Kurien told Naidu that Azad had given a notice to raise farmers distress and even without a notice the Leader of the Opposition and Leader of the House are allowed to speak whenever they wish to speak.

To Naqvi, he said the ruling side can give a notice to raise a discussion on the issue they want, and asked Azad to make his submission.

Alleging that the Centre was anti-farmer and its policies were ruining crops, Azad said farmers are dying, their vegetables rotting and crops welting and they are not sowing seeds. Farmers in Uttar Pradesh, Punjab and other states are facing grave distress and the Centre should waive off their loan, he demanded.

Using his lung power to make his submission amid the din, the Leader of Opposition said, "The ruling side is not allowing Parliament to function."

Naidu demanded that Parliament discuss the chopper scam as many names had cropped up in the 'diary' of alleged middleman Christian Michel which was published in a section of the media.

"I would like Parliament to discuss about the serious diary bomb which has been published in newspapers today (on Thursday). It’s a very serious issue because it is a matter which was placed before the Italian court and then names of certain people have also been given in alphabets of course.

"The report says 6 million euros (have been paid) to Air Force officers, 8.4 million to bureaucrats and 16 million to politicians. We must try to reach the bottom of the truth, and as the House is in session, we must discuss this in the House because this is the biggest scam in the recent years that too pertaining to defence deals that happened during the UPA regime," Naidu said.

Alleging that the erstwhile UPA government 'successfully prevented' the truth from coming out, Naidu said, "Now that there is a change of government, the inquiry has to be expedited and then nation also has to be told who is behind all this."

"My advice to them is, first face this Agusta heat, respond to these allegations and then discuss other issues also. The government has no problem," he said.

Senior Congress leader A K Antony sprang to Sonia’s defence, saying she had no role in the procurement of the helicopters and that the Bharatiya Janata Party will make a ‘laughing stock’ of itself if it dragged her into the controversy.

He also said that the way BJP leaders were claiming that the Central Bureau of Investigation ‘will nail the culprits in two months’ was not good for the agency investigating the AgustaWestland chopper deal.

"CBI is working under the directions of BJP, is that what they (BJP members) are attributing. I feel sorry. Don’t tarnish the image of the CBI like that," the former defence minister said.

"Soniaji has no role. There is no connection with Soniaji. Helicopters are meant for the use of President, vice president and the prime minister. Soniaji has nothing to do with that. In the Italian court itself it was mentioned," he told reporters.

Antony said Sonia had no connection with the decision, because the driving force behind the procurement was the Indian Air Force.

"They were telling that because the old Russian-made helicopter is not safe for VVIP travel. They wanted to change it. So 1999 onwards this procurement was there," he said.

He claimed that the utterances of BJP members showed that the CBI is 'under their thumb'.

"What the CBI is going to do within two months if the BJP is saying. It is too much. That is, they are attributing that the CBI is under their thumb, that is not good," he said.

Mayawati of the Bahujan Samaj Party, Sitaram Yechury of the Communist Party of India-Marxist and Derek O'Brien of the Trinamool Congress too rose to speak but nothing could be heard in the din.

At this point, Congress members trooped into the Well of the House shouting slogans demanding waiver of farm loans.  Kurien tried to restore order but his pleas fell on deaf ears, forcing him to adjourn the proceedings till noon.

When the House met at noon for the question hour, pandemonium prevailed as members of both the Congress and the BJP were on their feet raising slogans and counter slogans.

Amid the continued uproar, Ansari adjourned the House initially for 30 minutes.

When the House met again, there was ruckus with opposition members again on their feet raising their issue.

The House saw uproar again when it re-convened.

Naresh Agarwal of Samajwadi Party said the condition of farmers is bad after demonetisation.

"We hoped that the prime minister will announce a loan waiver for farmers which will benefit them," Agarwal said.

He said the farmers are unable to sow seeds or sell their produce following the cash crunch post-demonetisation.

Satish Chandra Mishra of the BSP said the farmers seeds are rotting and they do not have money to buy fertilisers etc. The ruling side members shouted back.

Amid a shouting match, Kurien said: "The item to be taken up is discussion on demonetisation of currency. Since both sides are disrupting, I will have to assume that both sides do not want a discussion."

Opposition members then stormed the well of the House, prompting the deputy chairman to adjourn it till Friday. 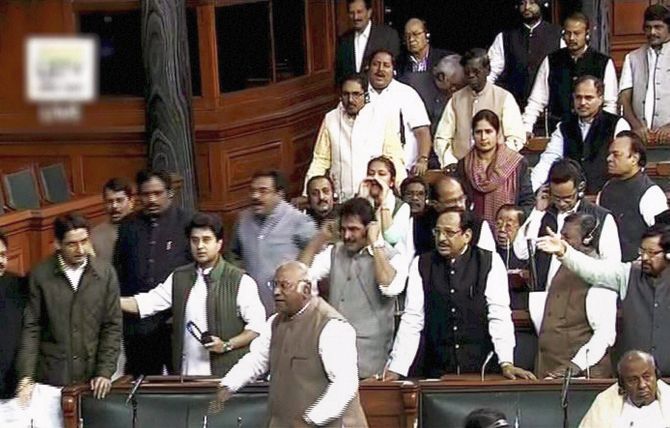 In the Lok Sabha too, the government and the Opposition traded charges, with BJP adding fuel to the fire by bringing the Gandhi family under attack in the AgustaWestland case.

TMC’s Sudip Bandhopadhyay and Congress leader Mallikarjun Kharge said the Opposition wanted a debate on demonetisation even without voting or under any rule but there were counter attacks from the BJP side, leading to continued heated exchanges in the House.

Parliamentary Affairs Minister Ananth Kumar launched a scathing attack on the Opposition, accusing it of scuttling debate from the day the session began on November 16.

Charging the Opposition with attempting to fail the note ban move, he said Congress was trying to “manage currency” (note jugaad) post-demonetisation when Prime Minister Narendra Modi has launched a vigorous campaign against black money.

With a united Opposition unsparing in its attack on the government, Ananth Kumar said the government was ready to discuss demonetisation but the Opposition should allow a debate on the chopper deal.

"We are ready for debate on demonetisation in both Houses since day one. We were ready yesterday and we are ready today as well. But since the first day Rahul Gandhi, Congress and other opposition parties have been running away from debate," Kumar told reporters outside Parliament.

Congress leader in the Lok Sabha Mallikarjun Kharge said the government was ‘running away’ from discussion on demonetisation and raking up issues like AgustaWestland to divert the attention from note ban.

"They (members of Treasury benches) are bringing big, big posters of AgustaWestland in the House. What is this? This is for diverting the issue of demonetisation. They are trying one or the other excuse for adjourning the House," he said.

Kharge said AgustaWestland issue has ‘already been discussed before two sessions’ and ‘all the documents were presented’ at that time.

"AgustaWestland has been discussed but demonetisation not. Their intention is to divert. Hit and run (policy)...If you want to discuss now, then bring it under different rule. We are ready for discussion. Why do you want to divert the issue of demonetisation?" Kharge asked.

Telangana Rashtra Samithi member A P Jeethendar Reddy’s remarks targetting a section of the Opposition for not allowing debate on demonetisation triggered a fresh uproar with Congress and TMC members protesting his statements.

Reddy said he should be allowed to speak on demonetisation as he had already initiated the debate a few days back when he, as also B Mahtab of Biju Janata Dal, had given notice on the issue under Rule 193 that does not entail voting. TMC’s Kalyan Banerjee was heard telling Reddy as to why he was sitting in the Opposition benches and not formally switching sides to become a minister.

TMC and Congress members also took exception to Reddy’s remarks that all political parties have hailed note ban at an all-party meeting held before the start of the session.

At the outset, Kharge said his party wanted a debate as demonetisation has hit hard the common man but 'Modi sahib is running away and is not coming to Parliament'.

Amid the ruckus, BJP veteran L K Advani once again vented his ire over the developments and told a group of MPs, after adjournment of the House for the day minutes past noon, that 'I feel like resigning'. 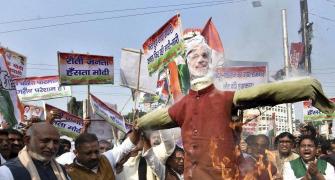 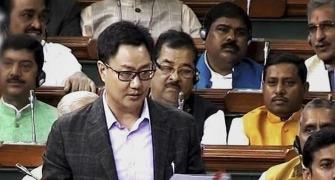 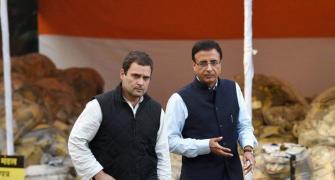 Rahul to hit streets against note ban after winter session Rahul says he has info on 'personal corruption' by PM Modi 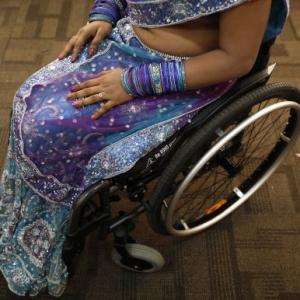