Will take action against attackers after polls: Mamata

West Bengal Chief Minister and Trinamool Congress supremo Mamata Banerjee on Wednesday said that she has photographs and videos of those who attacked her car in Nandigram on Tuesday and would take up the issue after the elections. 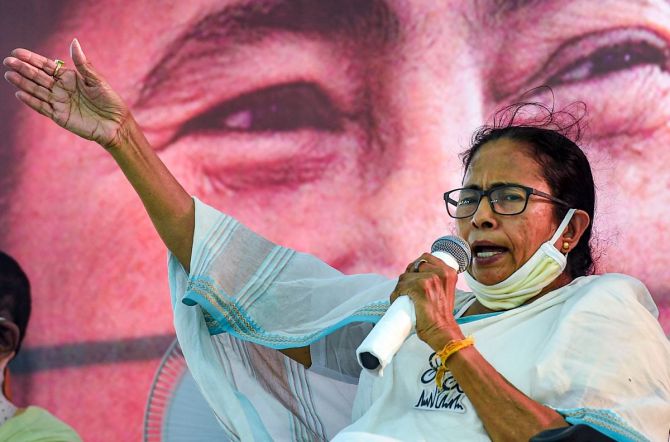 IMAGE: West Bengal Chief Minister Mamata Banerjee addresses a rally on the last day of the campaign for the 2nd phase of assembly elections in Nandigram. Photograph: Ashok Bhaumik/PTI Photo

Banerjee said that she refrained from any action as elections are on and the model code of conduct is in place.

"How dare they attack my car! I kept mum only because the elections are on. Or else I would have seen how big they have grown," Banerjee said at a rally in Goghat.

"I have videos of the goons attacking my car. Let the elections be over in Bengal, then I will take action," the chief minister said adding a Bengali proverb "Ami dekhbo koto dhane koto chaal hoi (They will learn what's what)."

A visibly agitated Banerjee said of her attackers "I will see which 'gaddar' (traitor) shelters you. Where will you go? To Delhi, Bihar, Rajasthan or UP. I will drag you back here (West Bengal)."

The fiery leader was heckled by alleged opposition party supporters when she visited a TMC worker, undergoing treatment after being beaten up.

Her car was then chased by placard waving people, who TMC members said had attacked the vehicle.

Banerjee, who is contesting from Nandigram assembly constituency, said the Bharatiya Janata Party has roped in former Communist Party of India-Marxist goons to fight her.

"You (BJP party members) are scared to fight a single woman...BJP has nothing of its own. They are running the party by borrowing CPI-M goons. They (BJP) have given tickets to CPI-M 'harmads' (hired goons) to fight the elections," she alleged. 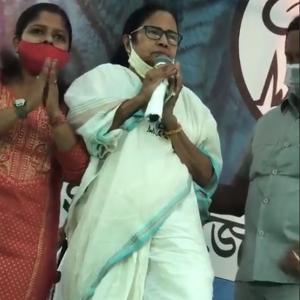