Injured Mamata stands up for national anthem in Nandigram

Trinamool Congress supremo Mamata Banerjee, who has been seeking votes for her party sitting on a wheelchair following a foot injury on March 10, got back on her feet to sing the national anthem as campaigning comes to an end for Nandigram, her constituency, on Tuesday. At the end of her last meeting at Nandigram before curtains came down on the high-octane campaign for the second phase, the national anthem was sung.

Just before it started, Banerjee signalled to her trusted lieutenants Subrata Bakshi and Dola Sen to come to her side.

Supported by them, the West Bengal chief minister was back on her feet.

Though she looked uncomfortable, the feisty TMC leader continued to stand being held by the two TMC leaders on the stage and joined others in singing the national anthem.

She sat down on the wheelchair the moment the anthem was over and was later brought down from the podium by her security personnel.

Banerjee, who has been alleging that her injury was the result of a conspiracy hatched by the BJP, said in her last meeting that she would not leave the ground and continue to fight.

All eyes are on battleground Nandigram, where Banerjee is locking horns with her protege-turned-rival Suvendu Adhikari.

Election in the seat will be held on April 1. 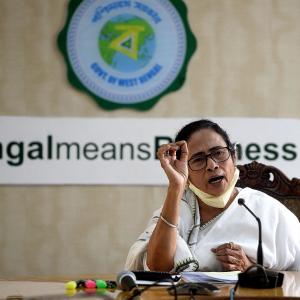