Rahul firm on resignation; leaders urge not to quit

Tamil superstar Rajinikanth also said the Congress chief should stay on as he was a "youngster" and perhaps not got the cooperation of senior party leaders. 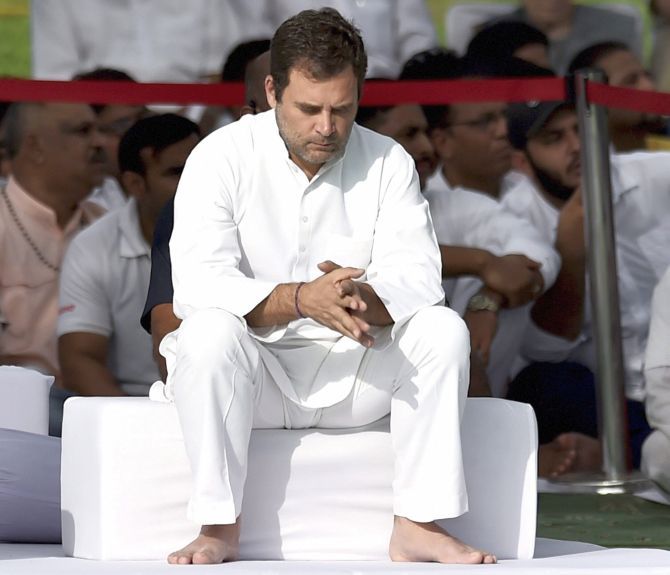 The crisis in the Congress showed no signs of easing on Tuesday with Rahul Gandhi sticking to his decision to resign as party chief after its Lok Sabha poll debacle and staying away from meeting party leaders, except a few including his mother and United Progressive Alliance chairperson Sonia Gandhi and sister Priyanka Gandhi Vadra.

Sources said Rajasthan chief minister Ashok Gehlot and his deputy Sachin Pilot went to meet Gandhi at his Tughlaq lane residence, but they only managed to meet Priyanka there.

With senior Congress leaders pressing upon Rahul Gandhi to take back his resignation and revamp the party at all levels in these challenging times, a number of allies stood by him and urged him not to quit, describing him as the "best and competent" person to pull the party out of the abyss.

The sources said Gandhi is not meeting anyone and remains incommunicado.

He met only Sonia Gandhi and Priyanka Gandhi during the day, besides party leaders K C Venugopal and chief spokesperson Randeep Surjewala.

Asked about the meeting, Gehlot and Pilot said that they did go to Rahul Gandhi's residence separately and spent some 20 minutes each there.

Gehlot was reportedly ticked off by Gandhi at the CWC meeting on May 25 for giving priority to campaigning for his son in Jodhpur and neglecting other parts of the state.

Rahul Gandhi met Sonia Gandhi in the evening and the two spent some time together.

Sonia Gandhi came along with Rahul to drop him at his residence and spent some time there too.

The sources indicate that the state executive of Rajasthan Pradesh Congress Committee will be meeting on Wednesday in Jaipur and would endorse the CWC resolution urging Rahul Gandhi to continue as party chief and steer the party out of its current state.
The state co-ordination committee of Haryana is also meeting on Wednesday.

The sources said more PCCs are likely to endorse the CWC resolution, as Delhi Congress chief Sheila Dikshit also appealed to Rahul to withdraw his decision to step down, saying the party has bounced back in the past from challenging circumstances to triumph.

The chorus of voices urging Rahul Gandhi not to quit grew as Dravida Munnetra Kazhagam chief M K Stalin told the Congress president that he has won the hearts of the people, while Rashtriya Janata Dal supremo Lalu Prasad termed the offer to quit as "suicidal", asserting it would amount to "falling into the BJP's trap".

Tamil superstar Rajinikanth also said the Congress chief should stay on as he was a "youngster" and perhaps not got the cooperation of senior party leaders.

Rahul Gandhi offered to quit as party chief at the CWC meeting on May 25 that unanimously rejected his offer and authorised him to overhaul and restructure the party at all levels.

He is reported to be insisting on his resignation and adamant on having a non-Gandhi installed as the party head.

As senior Congress leaders made a determined bid to convince Gandhi to withdraw his resignation, Shashi Tharoor, who scored an electoral hat-trick by winning from the Thiruvanathapuram Lok Sabha seat, said Gandhi has led the party from the front and still has far more to offer to it.

Another Congress leader Pramod Tiwari said, "Instead of resigning, he should seek resignations of leaders at all levels and restructure the party."

M Veerappa Moily, also of the Congress, termed the poll setback as a "passing phase".

Describing Gandhi as an "inspiration" for the party, Moily said it was not appropriate for him to quit his post.

"Just because (Narendra) Modi has won...that is not a criteria to leave the presidentship. After all, ups and downs are common for the Congress party. We have seen them many a time," he said.

Gandhi should not insist on his resignation and should "continue to guide the destiny of the party and the nation", he said.

"Apart from legacy, on his own personality, he is the most competent person to lead the party," Moily said.

During his telephonic conversation with Gandhi, Stalin told him though the Congress party has suffered defeat in the Lok Sabha polls, "you have won the hearts of the people".

The DMK-led front in Tamil Nadu won 37 of the 38 LS seats to which election was held in the state.

Lalu Prasad tweeted: "Rahul's offer to resign suicidal. Opposition parties had the common goal to dislodge BJP but failed to build a national narrative. The result in a particular election can never alter the reality in as diverse and plural a country as India."

Asked by reporters in Chennai about Gandhi's offer to resign, Rajnikanth said, "He should not resign."

Leaders are pointing out that the CWC, which is the highest decision-making body of the party, has already put down in writing its decision at the meeting on May 25.

Asked at the AICC briefing, party spokesperson Pawan Khera said, "Let us not indulge in any speculation. The resolution of CWC stands and that is where we are."

Faced with a colossal electoral defeat, the Congress has been riven by internal turmoil. As the party grapples with a severe existential crisis, its governments in Karnataka, Rajasthan and Madhya Pradesh teeter on the brink with reports suggesting the BJP may try to wrest power in these states. 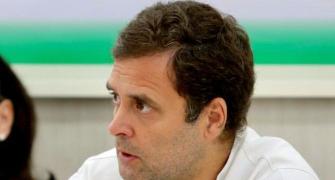 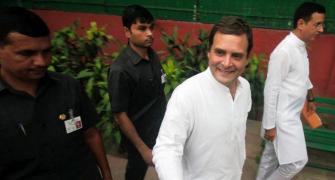 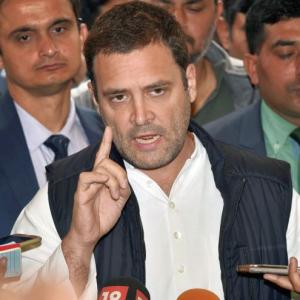 Disquiet in Cong ranks as Rahul insists on resigning