Will honour his memory by...: Quad leaders mourn Abe

Leaders of India, Australia and the United States -- countries that make up the Quad with Japan -- expressed shock at the assassination of former Japanese Prime Minister Shinzo Abe, saying he played a 'formative role' in the founding of the partnership and worked tirelessly to advance a shared vision for a free and open strategically-important Indo-Pacific region. 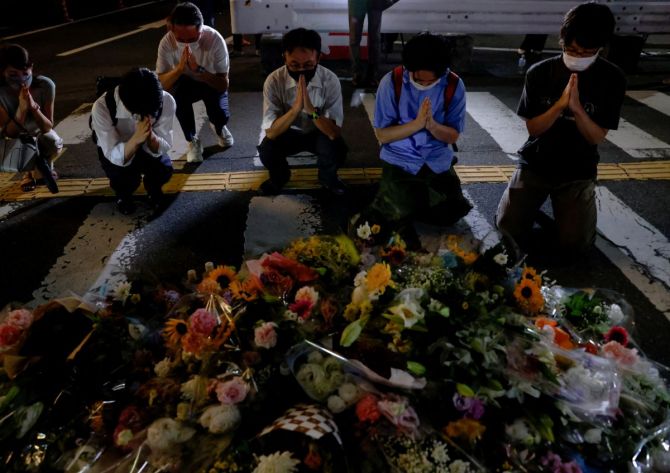 IMAGE: People pray next to flowers laid at the site where former Japanese Prime Minister Shinzo Abe was shot while campaigning for a parliamentary election, near Yamato-Saidaiji station in Nara, Western Japan, on July 8, 2022. Photograph: Issei Kato/Reuters

Abe, 67, was shot from behind in Nara in western Japan while giving a campaign speech.

He was airlifted to a hospital but was not breathing and his heart had stopped.

He was pronounced dead later at the hospital.

Abe was Japan's longest-serving leader before stepping down in 2020 for health reasons.

'We, the leaders of Australia, India, and the United States, are shocked at the tragic assassination of former Japanese Prime Minister Shinzo Abe,' US President Joe Biden, Australian Prime Minister Anthony Albanese and Prime Minister Narendra Modi said in a statement on Friday released by the White House.

The leaders called Abe a 'transformative leader' for Japan as well as for Japanese relations with each one of the three countries.

'He also played a formative role in the founding of the Quad partnership, and worked tirelessly to advance a shared vision for a free and open Indo-Pacific,' they said.

Abe was one of the architects of the Quad, the US, India, Japan and Australia alliance aimed at countering China's growing influence and military might.

The four countries had in 2017 given shape to the long-pending proposal of setting up the 'Quad' or the Quadrilateral coalition to counter China's aggressive behaviour in the Indo-Pacific region.

The leaders vowed to honour Abe's memory by 'redoubling our work towards a peaceful and prosperous region' and added that their hearts are with the people of Japan and with Prime Minister Fumio Kishida in their moment of grief.

Public broadcaster NHK said police have arrested Nara resident 41-year-old Tetsuya Yamagami, who allegedly used a handmade gun to shoot Abe, a tragedy that has shocked Japan which has some of the strictest gun laws in the world.

Condolences poured in from leaders around the world over the tragic killing of Abe.

United Nations Secretary-General Antonio Guterres said he is deeply saddened by Abe's 'horrific killing', calling it an 'act that has profoundly shocked Japanese society in a country with one of the lowest rates of gun crime'.

A statement issued by the UN chief's spokesperson said Abe will be remembered as a staunch defender of multilateralism, respected leader, and supporter of the United Nations.

'The Secretary-General recalls Shinzo Abe's commitment to promoting peace and security, championing the Sustainable Development Goals and advocating for universal health coverage. As the longest-serving Prime Minister, he was dedicated to reviving his country's economy and serving the people of Japan,' it added.

The UN Secretary-General expressed his deep condolences to Abe's family and the people and Government of Japan.

Permanent Representatives and diplomats of the 15 nations of the UN Security Council, before their meeting on the situation in the Middle East, stood up to observe a minute of silence in the memory of and to pay their respects to Abe and the former President of Angola Jose Eduardo dos Santos, who passed away in Spain.

Brazil's Ambassador to the UN Ronaldo Costa Filho, the current President of the Council, said at the outset of the meeting that on behalf of the Security Council, he expresses 'our sadness and shock' at the 'senseless assassination' of Abe.

He also extended the Council's sadness over Santos's passing.

'The members of the Security Council express their condolences and deepest sympathy' to the families of Abe and Santos and to the governments and people of Japan and Angola 'on their tragic losses', Filho said.

Japan will begin its two-year term as a non-permanent member of the UN Security Council from January 1, 2023, the 12th time that Tokyo will be in the Council as an elected member since joining the UN in 1956, more than any other UN Member State.

Japan will begin its tenure on the UNSC as President of the Council for the month of January. 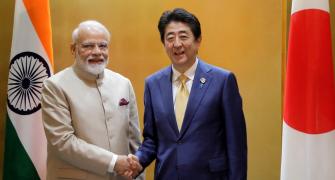 No change of guard at Rashtrapati Bhavan on Saturday 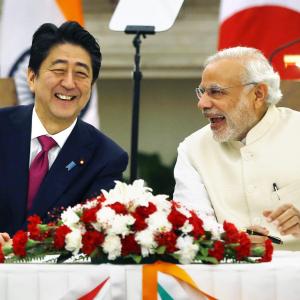 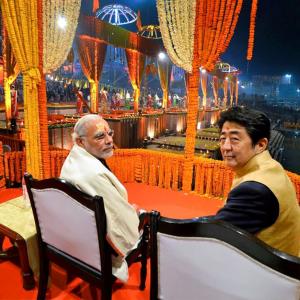