Some within the BJP see Amit Shah's entry into the Rajya Sabha as the party's succession plan for 2025 when Narendra Modi turns 75.
Archis Mohan reports. 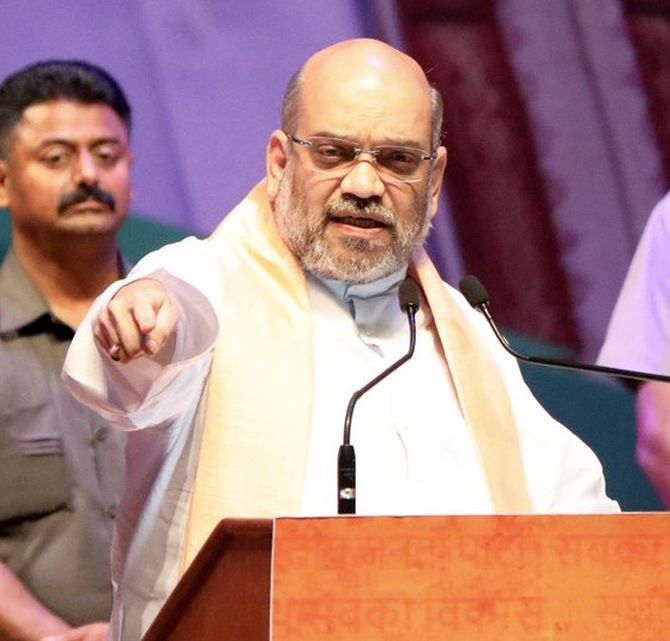 The BJP's national council stamped its approval on the decision of its parliamentary board a month later, on August 9, 2014.

Shah, therefore, officially completes three years as the party chief on Wednesday, when he is, incidentally, also on the cusp of taking the next big step in his eventful political career.

Shah will enter the Rajya Sabha from Gujarat, which many in the party think is the precursor to his taking up more onerous responsibilities in the Union council of ministers once he delivers an encore for Prime Minister Narendra Modi in the 2019 Lok Sabha polls.

Shah was Modi's minister of state for home when the former was the Gujarat chief minister.

Some within the BJP see Shah's entry into the Upper House as the party's succession plan.

By entering the Rajya Sabha, Shah would acclimatise himself with the workings of Parliament.

This preparation would help him as and when he succeeds Prime Minister Modi, possibly when the latter turns 75 in 2025.

The energy that Shah put into plotting the downfall of Congress leader Ahmed Patel suggests his motivation to be more than just political.

Those who have known Shah closely, and helped him out in his hour of need, say that the battle is personal.

It is about wreaking revenge on those who Shah believes made him spend three months in jail in 2010.

Shah looks at the Congress party, particularly those closest to the Gandhi family and some in the media, to have launched a witch-hunt against him that first led to his imprisonment for three months and later a court designated him 'tadipaar', when he was not allowed to enter Gujarat.

The Central Bureau of Investigation case related to his alleged role as the Gujarat home minister in the fake encounter killings of criminal Sohrabuddin Sheikh and others.

"When you shoot at the king you need to ensure that you finish him off. For if the king lives, he is sure to come after you," a senior BJP leader says of the Congress-led United Progressive Alliance's efforts to "fix" Modi and Shah and how the two are now on a mission to sound the death knell of the Congress party.

Shah was 15 years old when the BJP was founded in April 1980. Now, he is the party's youngest, arguably its most successful and without a doubt its most ruthless president.

In the last three years, Shah has scored several successes. The exact numbers have been disputed, but Shah has transformed the BJP from a cadre-based to a mass-based party.

The BJP claims itself to be the largest political party in the world with over 110 million members, which was accomplished during the second year of Shah's tenure.

The BJP has also expanded its footprint. It is no longer a party of the upper castes, but can count on significant Dalit and OBC support base.

It is also no longer the party of the middle classes. It has made 'garib kalyan', or welfare of the poor, a leitmotif of its ideology.

The party has expanded beyond its traditional strongholds. It scored an unprecedented victory in Assam in 2016, and now has governments in Arunachal Pradesh and Manipur.

It is preparing to put up a strong fight against the ruling Left Front in the Tripura assembly polls that are scheduled for early 2018.

Shah led the party to unprecedented victories in Maharashtra and Haryana, both of which came when the party decided to sever its alliances with parties such as the Shiv Sena and Haryana Janhit Congress.

The emphatic Uttar Pradesh victory has been the latest feather in Shah's cap.

There have been blips on the way. Shah's first defeat was in February 2015, when a resurgent Aam Aadmi Party meted out an embarrassing defeat to the BJP in the Delhi assembly polls.

By the end of the year in November, the BJP lost in Bihar at the hands of Lalu Prasad and Nitish Kumar.

Senior BJP leaders, led by Lal Kishenchand Advani and Murli Manohar Joshi launched a frontal attack on Shah in the aftermath of the defeat.

They soon found that they were irrelevant to the party's rank and file. Last month, Shah saw to it that Bihar Chief Minister Kumar was with the BJP again.

According to his Web site amitshah.co.in, the last three years have been spent setting up party offices in 80 per cent of the country's districts.

He also kept the party rank and file galvanised and rejigged party structures to reflect the support that the BJP has found among OBCs and Dalits.

In three years, Shah has also travelled extensively. According to one estimate, Shah has travelled 560,000 km across the country. He has visited 315 districts. 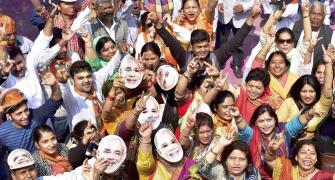