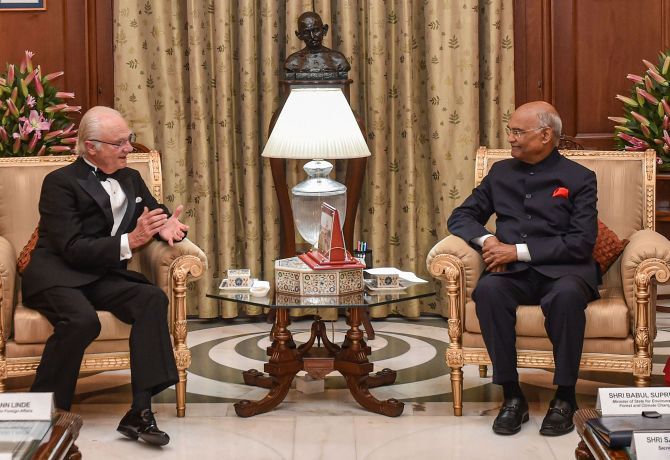 After talks between the King and President Kovind, the two sides inked three pacts providing for cooperation in polar science, innovation and research and in maritime spheres.

Separately, Modi and King chaired a meeting of the India-Sweden High-Level Policy Dialogue on Innovation Policy during which both sides discussed ways to expand engagement in research and development. 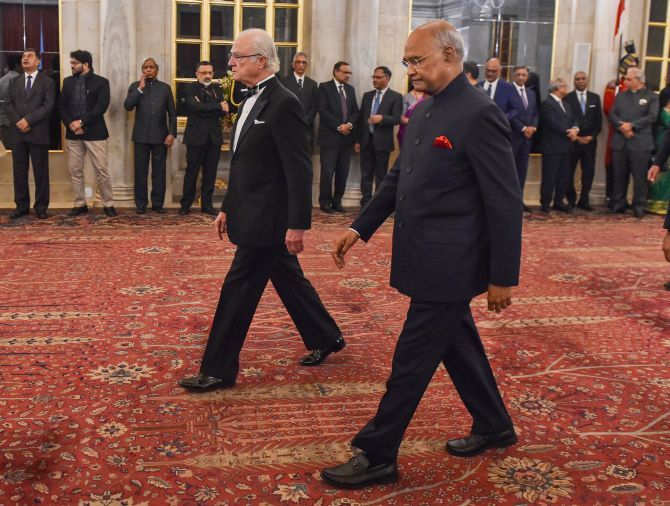 Earlier, national carrier Air India chipped in to ferry the Swedish King and Queen to India when their aircraft developed a technical snag at the last minute, a rare instance of a royal couple using a commercial aircraft for a state visit to the country.

The Swedish king and queen, who are on their second five-day visit to India after 26 years, were scheduled to arrive here on their state aircraft. However, they arrived in a direct commercial flight of Air India from Stockholm to New Delhi Monday morning. 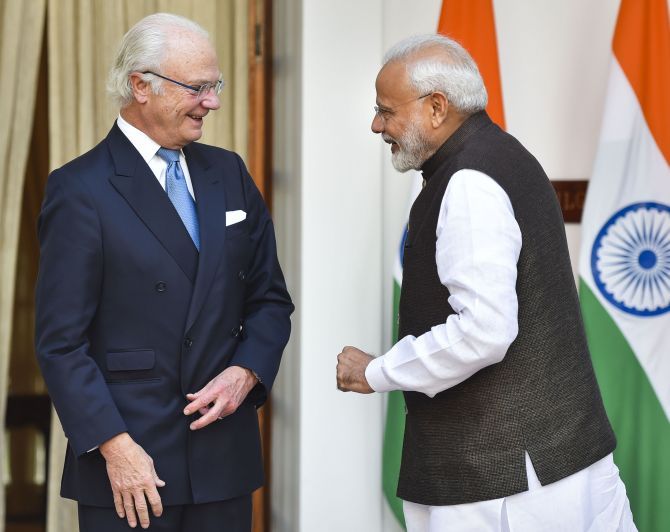 IMAGE: Prime Minister Narendra Modi in conversation with the Swedish King at Hyderabad House ahead of their meeting, in New Delhi, on Monday. Photograph: Subhav Shukla/PTI Photo

"The reason for the change was that there was a technical problem with the state aircraft," a Swedish official told PTI.

On arrival, they were greeted by country manager of Air India Sangeeta Sanyal. 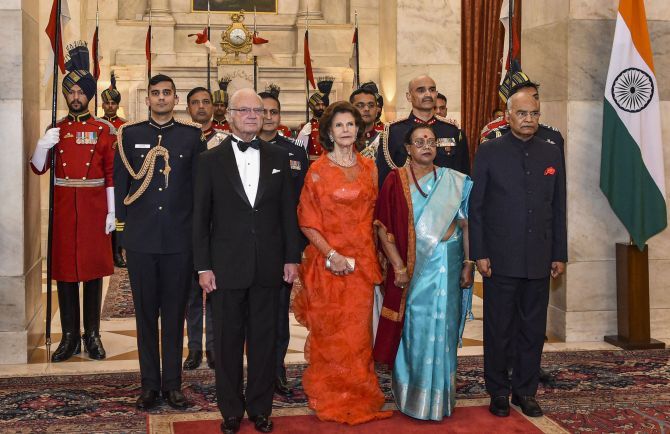 The images of the Royal couple carrying their bags after disembarking the aircraft immediately went viral with Twitterati drawing parallels with VIP culture in India. 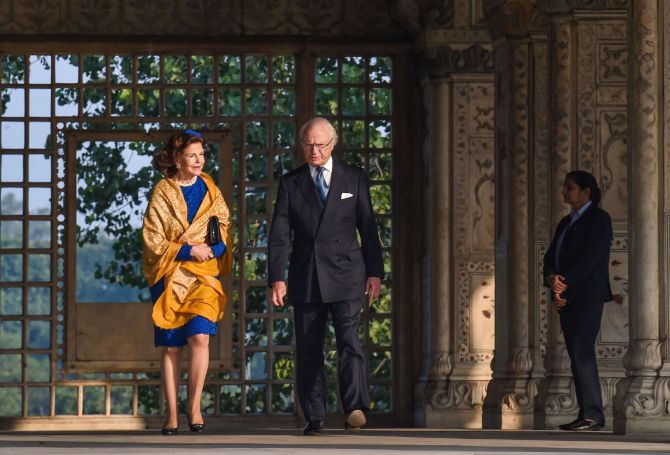 'If anything the so-called people in power should learn from them, both are old but unlike ruling class they don't have ego. Here even a young lad would ask a govt. servant to tie their shoes let alone carry the luggage,' another Twitter @ayushapoorva said.

The couple were received at the airport by Minister of State for Environment, Forests and Climate Change Babul Supriyo with Kathakali dancers and traditional drummers to welcome the dignitaries. 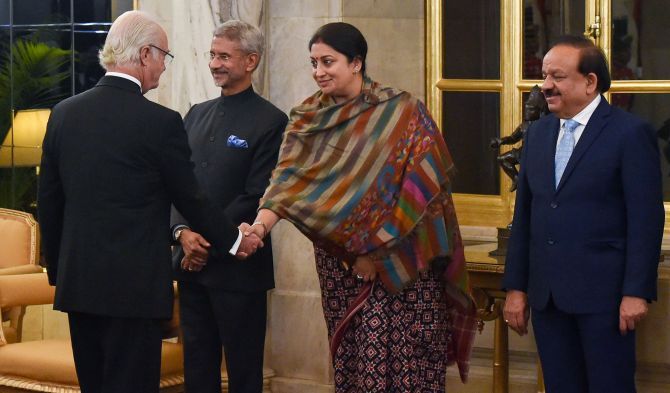 The couple will be visiting Mumbai and Uttarakhand during their five-day trip.

'Delighted to meet Their Majesties King Carl XVI Gustaf and Queen Silvia. We had extensive discussions on boosting cooperation between India and Sweden. Closer economic and cultural ties between our nations will greatly benefit our citizens,' Modi said in a tweet. 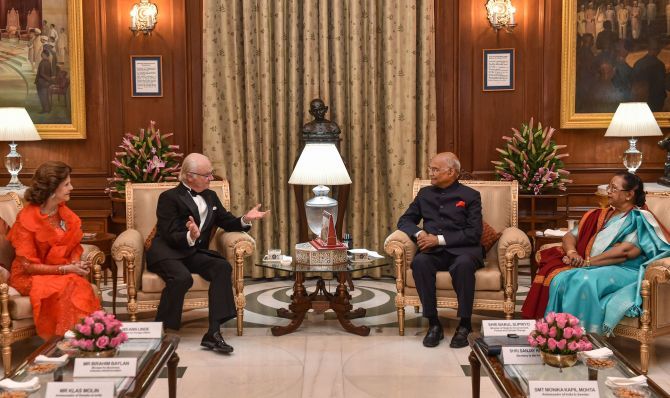 IMAGE: The Royals with the President and First Lady. Photograph: Manvender Vashist/PTI Photo

He said focus of the talks was to chalk out a blueprint for linking innovation with aspirations.

Officials said the talks were aimed at boosting overall bilateral cooperation in diverse areas including in trade and investment, innovation and and culture.

External Affairs Minister S Jaishankar also called on the King and Queen after their arrival and held discussions on ways to deepen bilateral ties. 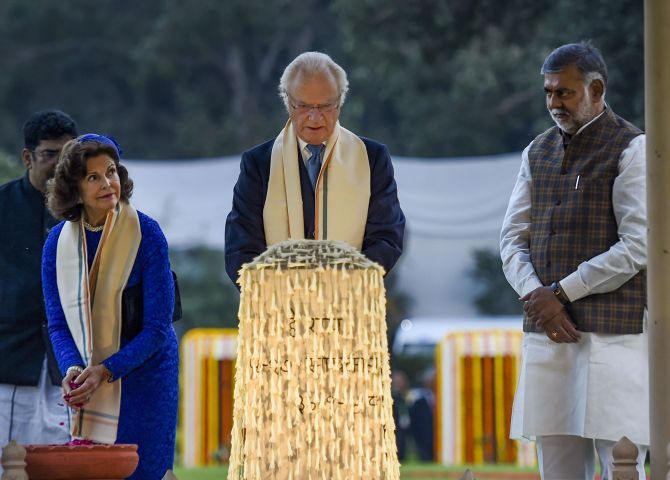 Jaishankar also held a separate meeting with his Swedish counterpart Ann Linde during which both sides resolved to step up cooperation to combat challenge of terrorism. 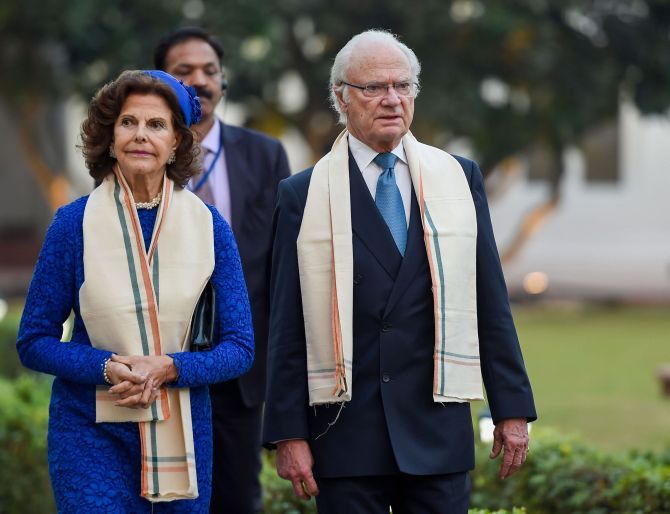 'Emphasised that right to life is the most basic human right. Agreed to work together in international forums to address this key challenge of terrorism,' he said 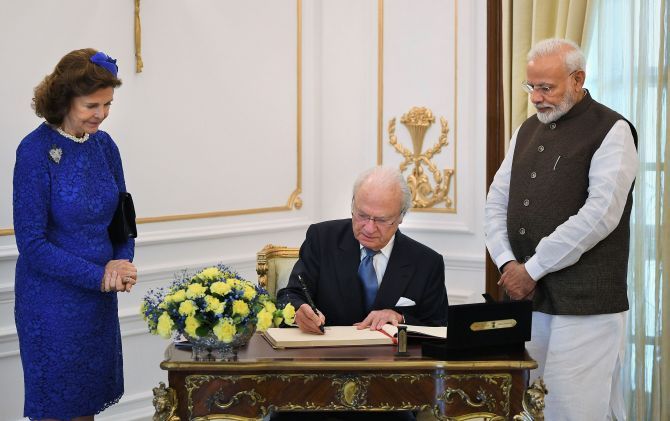 The ties between India and Sweden have been on an upward trajectory in the last few years. The bilateral trade volume was $3.37 billion in 2018.

The Swedish royal couple was accorded a ceremonial reception at the Rashtrapati Bhavan in the morning.

Apart from Delhi, the royal couple is scheduled to visit Mumbai and Uttarakhand. 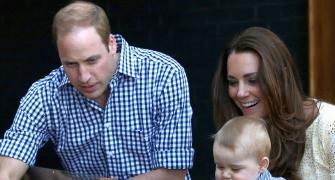 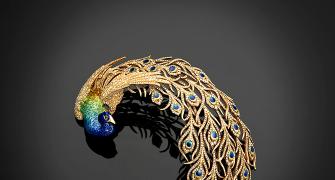 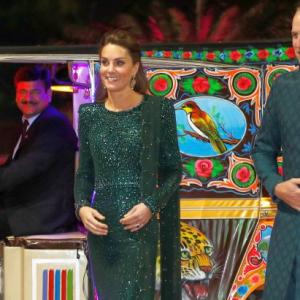 Kate, William hitch a ride in a rickshaw in Pakistan 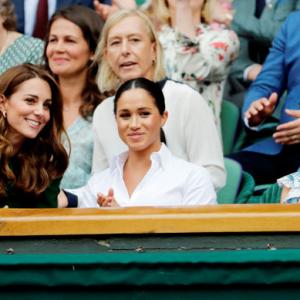