When you think of Indian Maharajas of yore what is the one thing that comes to mind?

And that is exactly what the world will witness at Christie’s, New York during its upcoming auction -- "Maharajas and Mughal Magnificence".

The "unprecedented group" of objects is from The Al Thani Collection of the royal family of Qatar. It is expected to see competitive bidding from across the globe.

As per Christie's, this collection is poised to be the most valuable auction of jewellery and jewelled objects. The current record is held by The Collection of Elizabeth Taylor, which totals $144 million (Rs 1,003 crore).

Mughal emperor Shah Jahan's jade hilted dagger, the priceless jewels of the Nizams of Hyderabad, and a string of pearls belonging to Rajmata Gayatri Devi of Jaipur are among the 400 royal artefacts that would be auctioned on Wednesday.

Here's a glimpse of the astounding jewels that will be auctioned. 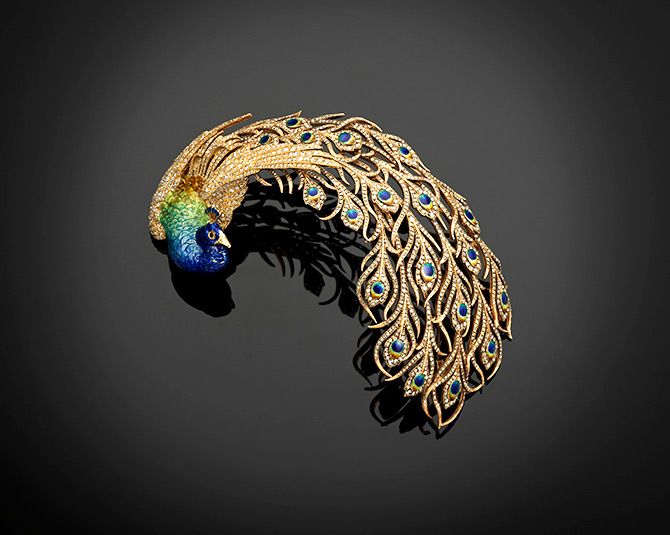 Paris-based jeweller Mellerio dits Meller made jewels for Maharaja Jagatjit Singh of Kapurthala.
One such ornament is the vibrant peacock aigrette, made of gold, diamonds and enamel. The piece is visible in the portraits of the maharaja's fifth wife, Rani Prem Kaur. Photograph: Kind courtesy Legion of Honor 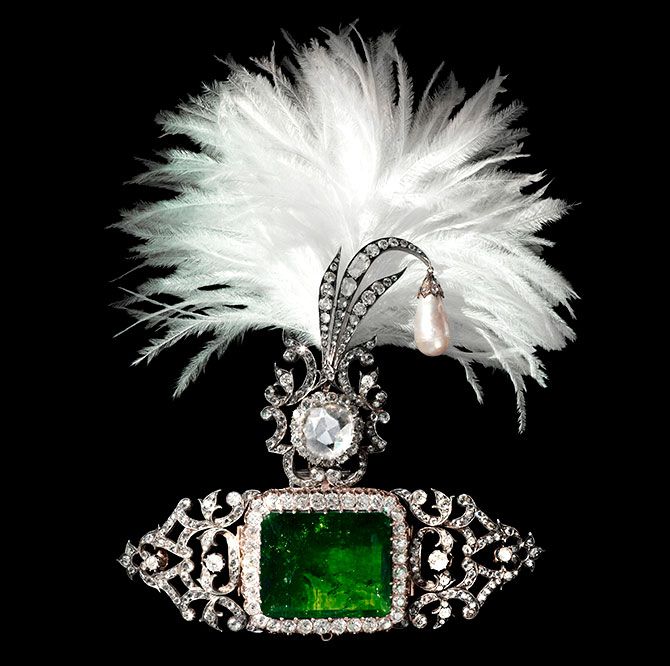 Mughal emperors originally wore turban ornaments known as 'sarpechs' to show off dazzling large gemstones, while egret feathers also signaled their rank as an emblem of authority.
Here the border of brilliant-cut diamonds and a substantial emerald echo European jewellery designs as the gems are not encased in closed settings that were typical of Indian jewellery. Photograph: Kind courtesy Legion of Honor 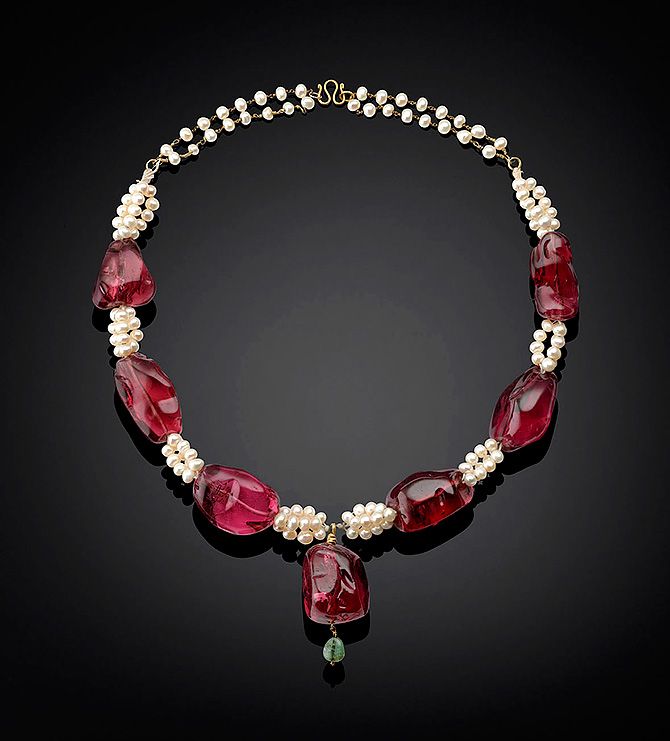 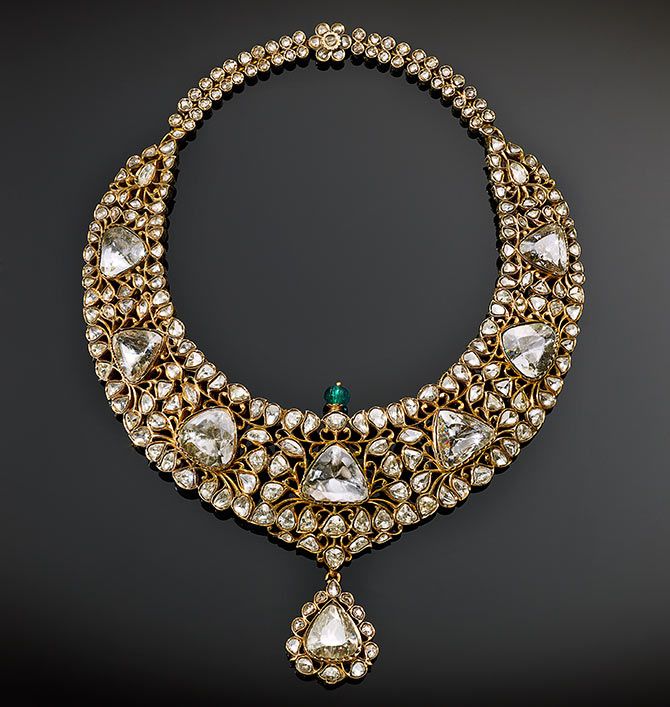 The Nizam of Hyderabad necklace.
The piece's eight large diamonds, each weighing between 10 to 15 carats, are modified brilliant cuts. The cuts represent an advance in gem-faceting technology in India. The symmetrical arrangement of the gems and the central pendant reveal Western influences. Photograph: Kind courtesy Legion of Honor 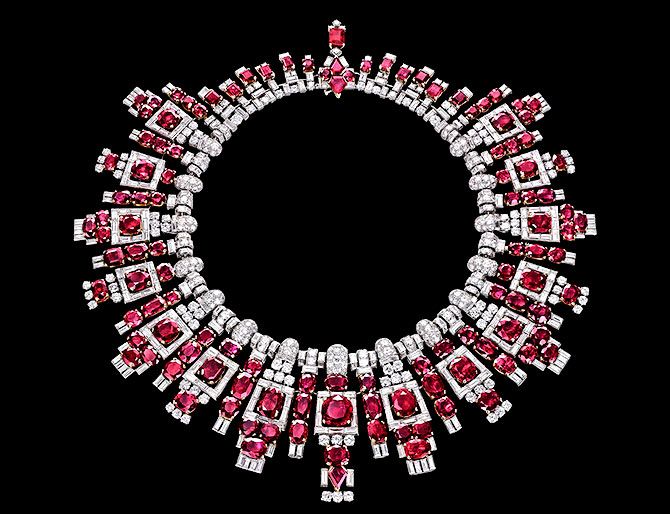 This 20th century necklace was created in France in 1937 for Maharaja Digvijaysinhji of Nawanagar, making the most of a remarkable collection of Burmese rubies amassed by his predecessor, a friend of the legendary jeweler Jacques Cartier.
Following Independence in 1947, Cartier bought the piece and altered the original design to better suit a woman.
It was subsequently bought and worn by Loel Guinness at author Truman Capote's famed Black and White Ball in 1966. Photograph: Kind courtesy Legion of Honor 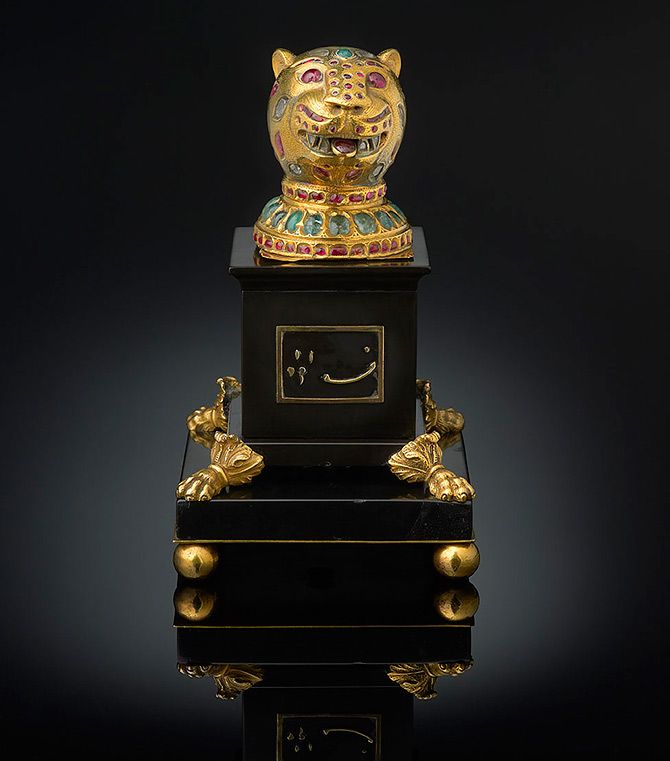 A gold finial from the throne of Tipu Sultan. It is set with diamonds, rubies and emeralds. The marble plinth with gilt metal fittings is 17.1 cm in height. . Photograph: Kind courtesy Legion of Honor 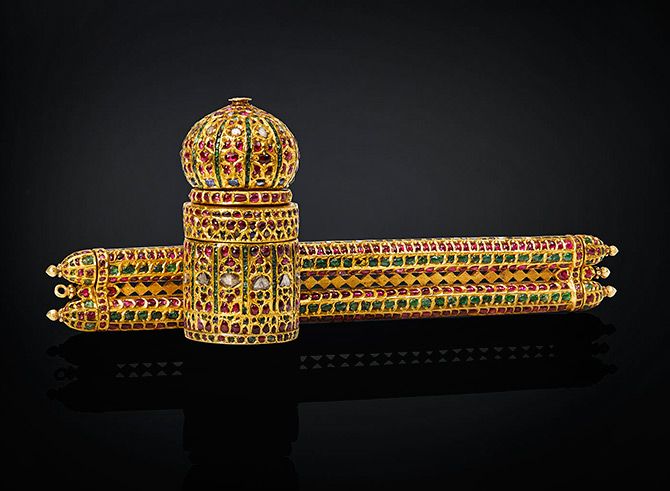 Pen cases and inkwells were symbols of the highest distinction. Its decoration includes a sacred bird called a hamsa, a symbol of Saraswati, the Hindu goddess of learning. Photograph: Kind courtesy Legion of Honor 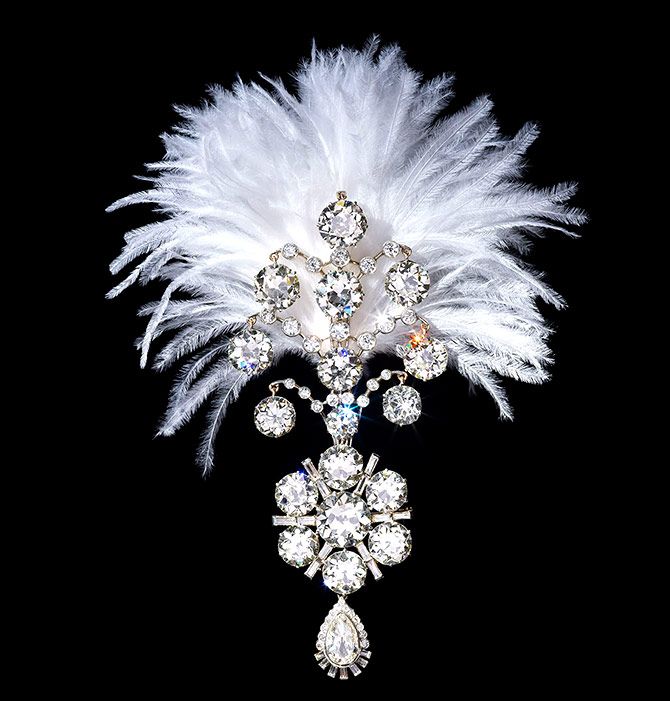 A stunning turban ornament of the Maharaja of Nawanagar, white gold set with diamonds. It was originally made 1907 and modified in 1935. Photograph: Kind courtesy: Legion of Honor 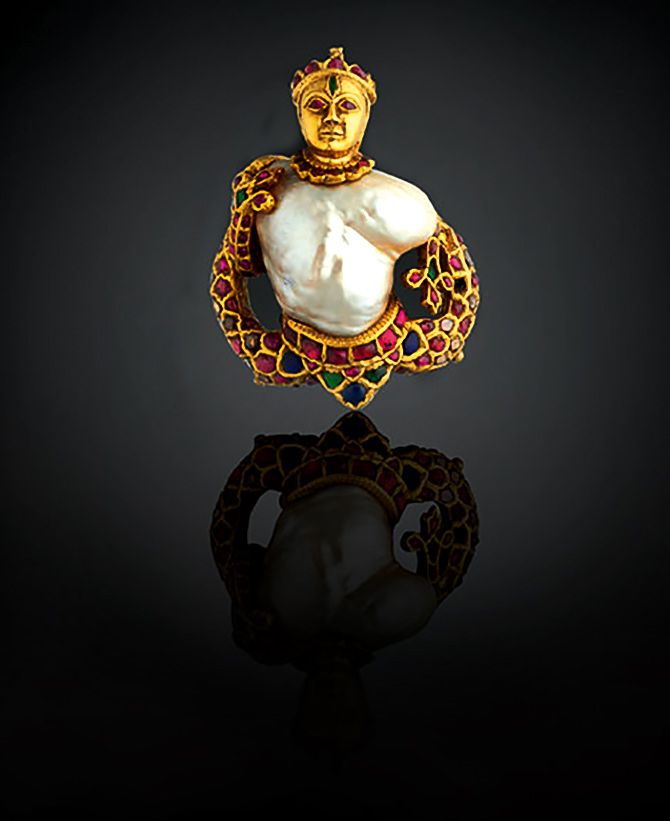 This pendant, in the form of a figure modelled around a baroque pearl, represents a fine example of the dialogue between Italy and India in the jewelled arts at the time of the Renaissance.
Using gems in Indian kundan settings, the pendant may have been made by a European goldsmith working in India.
The figure may be a snake god, Nagadevata. The Nagas were semi-divine, with a human face and the neck of a cobra.
The large pearl came to India through trade, either from the Pacific Ocean or from waters off the coast of America.
The composition of the pendant is directly inspired by 16th century Italian prototypes and reflects Mughal interests in the arts of the West. Photograph: Kind courtesy Legion of Honor 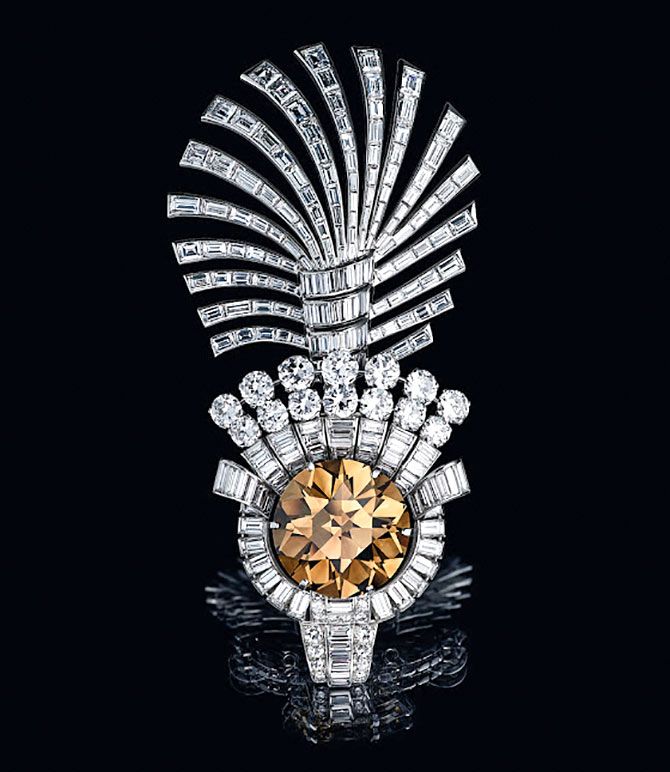 Although the Cartiers were never technically diamond merchants, the deals they made and the work they did with some of the finest stones in the world played a key role in developing the firm's international stature.
In 1937, Maharaja Digvijaysinhji of Nawanagar asked Cartier to set the 'Tiger Eye', an unusual cognac-coloured diamond discovered in 1913 and sold by the firm to his predecessor Maharaja Ranjitsinhji.
Cartier designed a turban ornament around the gem, using baguette-cut diamonds to create an Art Deco look for this traditional Indian jewellery form. Photograph: Kind courtesy Legion of Honor 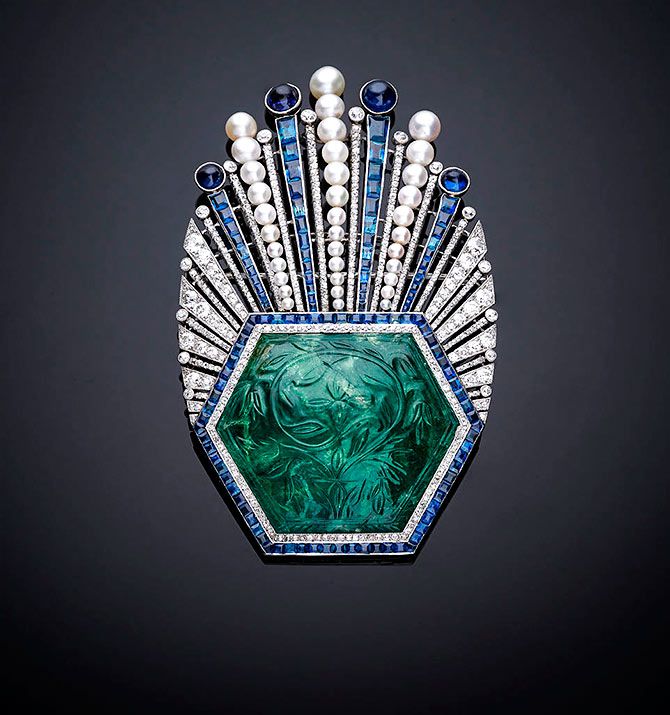 Another jewel piece for a turban. Photograph: Kind courtesy Legion of Honor 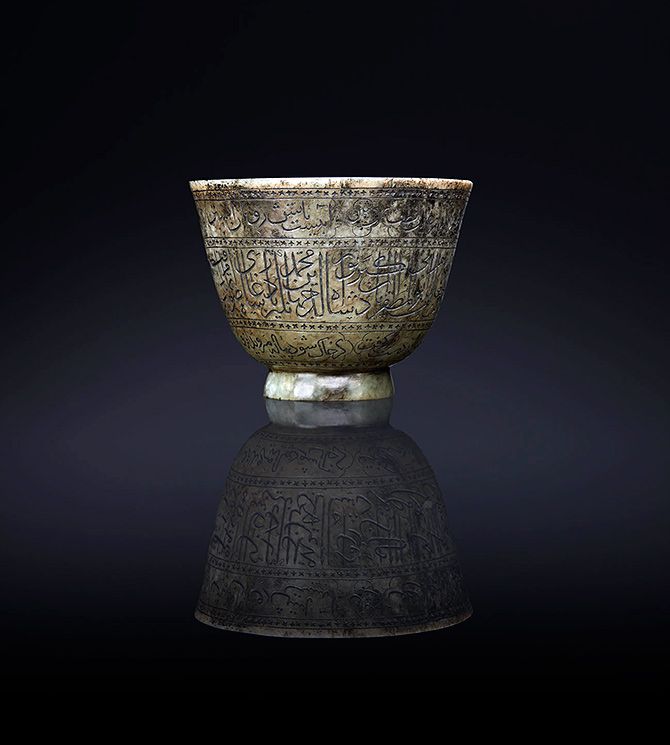 This wine cup is the earliest dated jade artefact that can be linked without doubt to any Mughal emperor.
It has three bands of calligraphy -- the central band, carved in monumental sols script, has a royal dedication announcing that the cup was made for Jahangir; the upper border, in Nasta’aliq script, confirms it was the personal cup of the emperor and was made in the second year of his reign, therefore between April 1607 and March 1608.
Persian verses ornament the cup, including some contemporary 17th century poetry, and it is suggested that the poet responsible was the maker of the cup itself.
The superintendent of the royal goldsmiths at the time was also rewarded by Jahangir for his skills as a poet. Photograph: Kind courtesy Legion of Honor 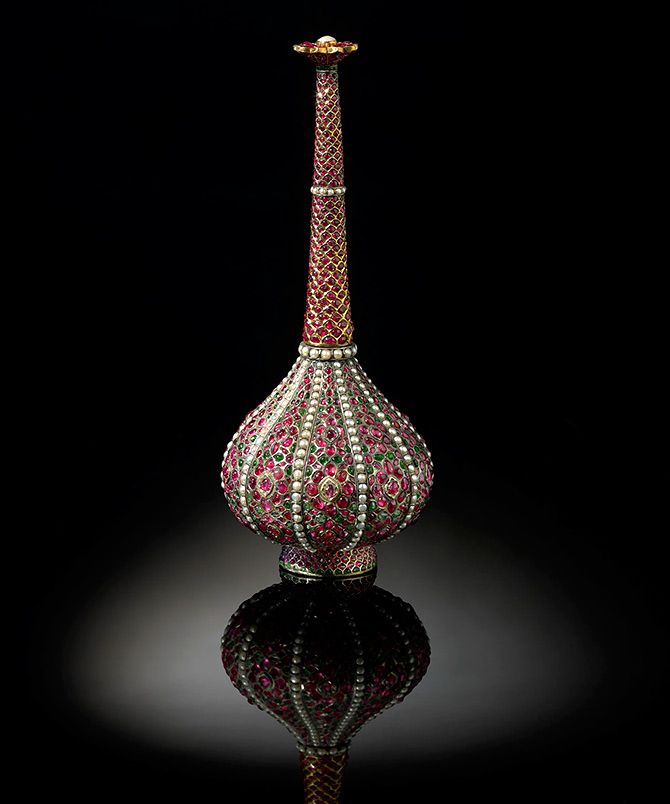 In the Indian court, rosewater was sprinkled over guests at the end of a meal using bottles such as this gem encrusted one which was probably made in the Mughal imperial workshops (1675 -1725).
The bottle is inscribed with its weight for the treasury records. Differences in the colour of gold and the settings suggest that the neck is a replacement dating from the late 18th century.
Rosewater was also sprinkled at larger social gatherings as a sign of favour and hospitality.
A similar bottle was removed from Delhi in 1739 and taken to Russia in 1741 by envoys of the Iranian ruler Nadir Shah. Photograph: Kind courtesy Legion of Honor 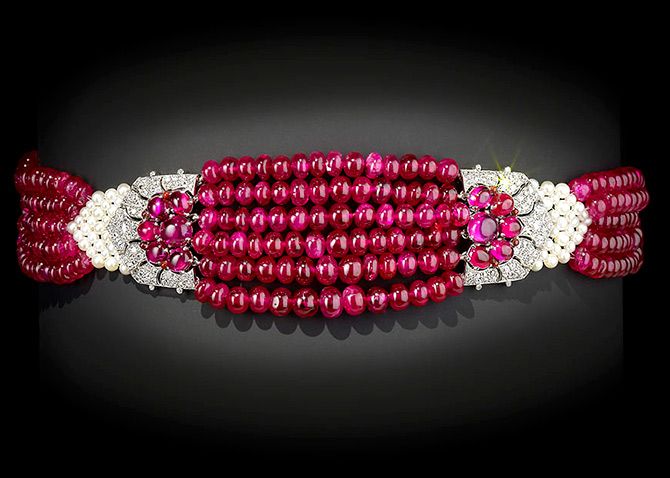 The Maharani of Patiala's choker of rubies, pearls and diamonds in platinum settings was made by Cartier in 1931.
An opulent matching set was ordered by Maharaja Bhupinder Singh of Patiala and this choker is the smallest surviving part of the set.
The maharaja reportedly ordered a number of jewels from Cartier and Boucheron, mainly for men, in 1925 and 1928 respectively, and later in 1931, he ordered some jewels for the women of the family. Photograph: Kind courtesy Legion of Honor 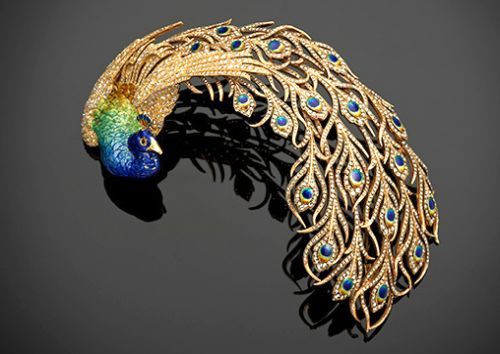 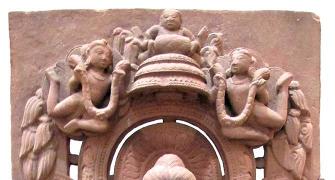 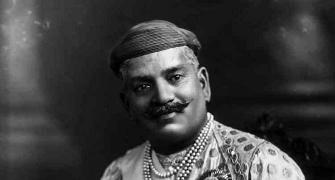