Facing criticism from social media and political quarters for holding a 'Free Kashmir' poster during the ‘Occupy Gateway’ protest against violence at Jawaharlal Nehru University, Mehak Prabhu, a Mumbai-based storyteller, on Tuesday clarified that she meant to highlight the restrictions imposed in Jammu and Kashmir and wished to see peace in the region and added that there was no other motive behind her actions.

"Around 7 pm yesterday, I reached where the protest was happening at the Gateway of India. Like anybody else who believes in democracy, I also joined that protest. We were standing for justice for the JNU students," Prabhu said in a video.

"I saw a bunch of people who were painting placards on every issue like National Register of Citizens, Citizenship Amendment Act and for JNU students. There was a placard lying on the side which said 'Free Kashmir'. The first thing which came to my mind when I saw that placard was about the basic constitutional rights of Kashmiris," she said.

Prabhu stated that she was not a Kashmiri and was brought up in Mumbai.

She outlined that she was standing with a flower in her hand and asserted that the entire matter was "completely blown out of proportion".

"I was quietly standing with a flower in my hand. This means we need to make peace together. That was my only intention in holding that placard. The narrative that has been put out is absolutely wrong," she said, describing the reactions to the matter as "crazy".

The Mumbai-based storyteller underlined that the incident is scary and urged the people to spread the words of what she said and not hatred.

"The way it has gone, it is very scary. I am a simple person. As a woman, it is very scary for my safety right now. Spread this side of my story and let's stop it here. Let us not spread the hate. It has happened to me, it can happen to anyone. We should not live in fear," Prabhu further said.

In a late Monday night tweet, Fadnavis asked, "How can we tolerate such separatist elements in Mumbai."

Fadnavis sought to know what exactly was the protest for and if Maharashtra chief minister Uddhav Thackeray will tolerate this "anti-India campaign" right under his nose.

"Devendraji, it's 'free kashmir' from all discriminations, bans on cellular networks and central control. I can't believe a responsible leader like you is trying to confuse people by decoding words in such a hatred way. Is it losing power or losing self control?" Patil tweeted.

Meanwhile, Maharashtra home minister Anil Deshmukh said the antecedents of the woman are being probed.

Talking to reporters, he said the woman's background is being verified.

"If she is involved in any anti-national activity, action would be taken against her," Deshmukh said. 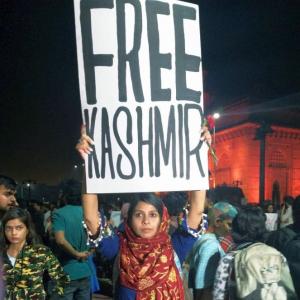 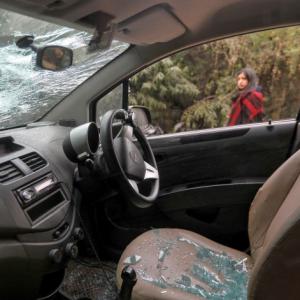