News
Business
Movies
Sports
Cricket
Get Ahead
Money Tips
Shopping
Sign in  |  Create a Rediffmail account
Rediff.com  » News » Why cows have become a problem in UP

Hordes of cows rampage through the fields, eating everything in sight.
This is after the UP government banned slaughter of cattle.
As a result, farmers whose cows become old and are a liability simply sets them loose.
Aditi Phadnis reports. "This election could not have come at a worse time," grumbled Shivkumar. "We have no time, we're harvesting wheat and people keep coming here to campaign. They want to talk to us, improve things... want our suggestions. But we have no time."

Looking for agricultural distress in Mohanlalganj, a reserved constituency barely 30 km from Lucknow, was a waste of time. Every second house had a tractor parked nearby, which suggested both the scale of farming and the turnover.

Eighty per cent of the children go to private, English medium schools. The government school has five teachers and only 50 children.

Everyone, even the women, have bank accounts. Members of the Navjyoti Kisan Producer Company Ltd had gathered together to explain their problems, gripes and grievances.

The principal among them was that only some houses had got the second tranche of the Rs 6,000 annual grant to farmers announced by Prime Minister Narendra Damodardas Modi: Not all.

"Modi is good," a farmer said. "We can now sell our crop easily."

The only problem is that the marketing officers expect them to take their produce to a market place (mandi) further away from the village, instead of procuring it at the village itself. This naturally entails an additional cost.

The other problem is cows -- hordes of them rampaging through the fields, eating everything in sight.

This is after the Ajay Singh Bisht administration banned slaughter of cattle. As a result, farmers whose cows become old and are a liability simply sets them loose.

"We can't say anything in the current dispensation: So we are now planting mentha (peppermint) instead of wheat. Cows don't eat mentha," the farmer said.

This shift is happening across the state.

State Health Minister Siddharth Nath Singh said, with a chuckle, he grows mentha too, in his ancestral farm, "mainly because the price is good".

In the community chabutara where we sat down to talk, an MCX digital scroll ran giving current prices of all commodities, an odd aberration in the rustic setting.

92 per cent of UP's farmers are small and marginal. 78 per cent of the holdings are below 1 hectare, slightly less than the national average of 1.2 hectare.

"At any given time, the UP farmer is stressed. So the distress you are mentioning is a part of his everyday life," said Dr Mukesh Gautam, a bureaucrat.

UP provides 20 per cent of all food to the nation. About a third of all wheat consumed in India comes from UP, even though the state produces just 33.9 quintals per hectare, compared to Punjab's 50 quintal per hectare.

"If we can increase productivity, we can feed the nation," says Dr Gautam.

One problem is soil health. 72 of 75 districts in the state are zinc- and sulphur-deficient. This is not a problem that is hard to remedy: What it needs is application and political will.

But the bigger problem is seed quality. Every state has its own seed corporation and seed certification agencies. The government gives a subsidy for seeds via direct benefit transfer. The farmer has the choice of buying seeds from the private sector or from the seed corporation.

But certification agencies have no way to certify private sector seed sellers. "Seed quality is going down every day," he says.

What the state bureaucracy would like is to be left alone to carry out agri surveys and interact more with farmers. Instead, they are pressed into service in getting farmers to open accounts one day, ensuring the Rs 2,000 grant is transferred to the accounts the next and activities of that nature.

"Every state has its own unique agricultural problems. The Centre's interventions cannot fix all of them. I wish the leadership would think of state-specific programmes that could address problems peculiar to UP, for instance. That would be more meaningful," Dr Gautam says.

He cites an example. UP's official records show that it grows no peanut at all. But in fact, peanut is grown on around 250,000 hectares of land in the state. There is no record of it because no one has bothered to keep records.

In eastern UP, maize is grown in the rabi season up to 70 quintals a hectare. But it is grown only over 6,000 hectares. These are innovations that can fetch farmers a better income provided someone records farm practices and suggests alternatives.

Agriculture department bureaucrats are forthright about loan waivers: They uniformly think it is a bad practice and believe farmers should be encouraged to take loans under the Kisan Credit Card scheme that would optimise their requirement of credit.

A lot can be done in agriculture in UP: but for Shivkumar, making ends meet is not such a dire struggle.

What he dreads however, is a crisis: A marriage, an illness. "Modiji is there for all those contingencies," he says. 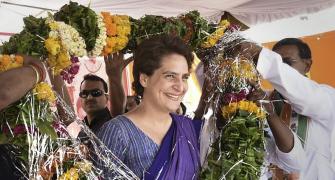