News
Business
Movies
Sports
Cricket
Get Ahead
Money Tips
Shopping
Sign in  |  Create a Rediffmail account
Rediff.com  » News » The rise of a nephew in Mayawati's BSP

The journey for 24-year-old Akash Anand would be much tougher, because dynastic succession goes against the grain of Dalit politics that B R Ambedkar founded.
Archis Mohan reports. 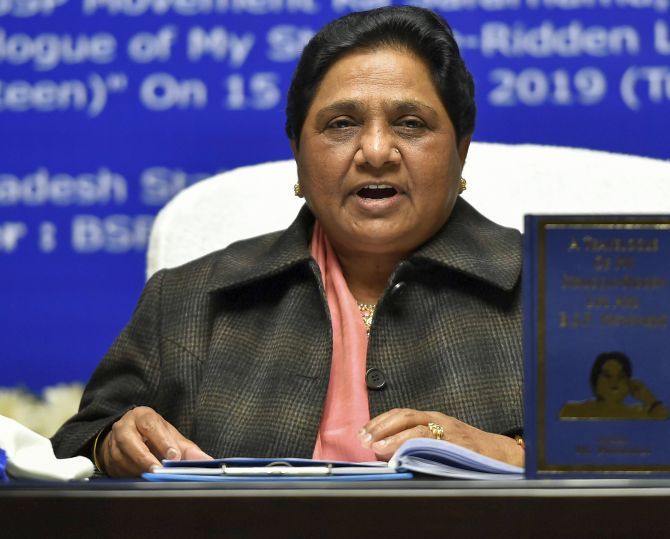 Naveen Patnaik is yet to.

Mamata Banerjee, when she appointed her nephew Abhishek Banerjee the head of her party's youth wing in 2012, and now Mayawati, by pushing her nephew Akash Anand to the centre stage, have seen the wisdom of putting in place a succession plan for their respective political parties during their lifetimes.

In India, dynastic succession in political parties is the glue to keep intact the web of network and patronage.

Abhishek, already a one-time Lok Sabha member, has years ahead of him to prove his ability to lead the party his aunt built, the Trinamool Congress.

But the journey for 24-year-old Akash would be much tougher than most other dynasts, mostly because dynastic succession goes against the grain of Dalit politics that B R Ambedkar founded.

The Bahujan movement lays much store in the fact that its top leaders, just as Ambedkar was, be well educated, and have preferably studied abroad.

Akash is a business management graduate from London.

In Akash's initial appearances by his aunt's, he appeared in what the media in Uttar Pradesh described in an expensive blue suit and fancy shoes, which among BSP supporters is thought to be viewed as a reflection of the aspirations of the Dalit youth, but was criticised in the media.

'As a befitting reply to such people, I would like to announce that I will now induct Akash into the BSP movement to understand the struggle of the BSP and to strengthen it,' Mayawati had then said.

Her second effort to get a family member in a key position in her party could also fail.

But Mayawati has persisted in projecting Akash in the run-up to the 2019 polls.

His was the third name in the list of 'star campaigners' the party submitted to the Election Commission -- after Mayawati and senior BSP leader Satish Chandra Mishra.

At the first pubic rally of UP's mahagathbandhan, or grand alliance in Saharanpur's Deoband on April 7, Akash's presence was specifically acknowledged after the meeting concluded.

In Agra, when the EC barred Mayawati from campaigning for violating the model code of conduct during her Saharanpur speech, Akash took her place on stage and copied her style by reading from a written text.

"Why should Akash's succession raise eyebrows when most other parties, including the Congress, Samajwadi Party and several others, also have dynasts in leadership positions? However, it is a questionable move when we look at the philosophical foundations of the Dalit movement," Dalit activist Ashok Bharti, chief of the national confederation of Dalit organisations, says.

Dalit activists point out that Ambedkar never foisted his son Yashwant Rao, who worked tirelessly in the Dalit movement, into a leadership role, and neither is his grandson Prakash the undisputed leader of the community.

Similarly, Kanshi Ram, the BSP founder, kept his family away from politics.

"Both Ambedkar and Kanshi Ram were opposed to nepotism and hereditary succession as they believed it kills democracy," Bharti says.

Not just Bharti, Akash's rise is unlikely enthuse those Dalit leaders who joined the party when they were in their late teens and now aspire to be in leadership roles in their early thirties.

The more potent challenge for Akash could have come from outside, from upcoming Dalit leaders like Chandrashekhar Azad and Gujarat legislator Jignesh Mevani.

However, the BSP think-tank is of the view that Chandrashekhar has "exposed" himself by showing proximity to the Congress, while Mevani is now seen to be aligned with the Leftists.

Until now, Akash is known for convincing his aunt to debut on social media, but the BSP leadership is hopeful that the vacuum in the Dalit leadership could give him time to find his space. 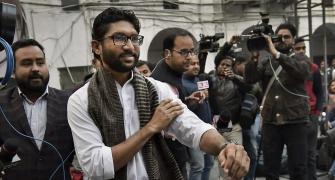 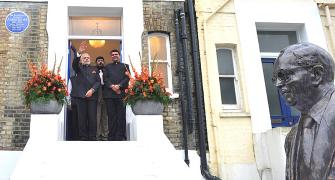