The core BSP campaign continues to be 'cadre-based' and personal connect, such as knocking each door or through nukkad sabhas.
Virendra Singh Rawat reports from Lucknow. 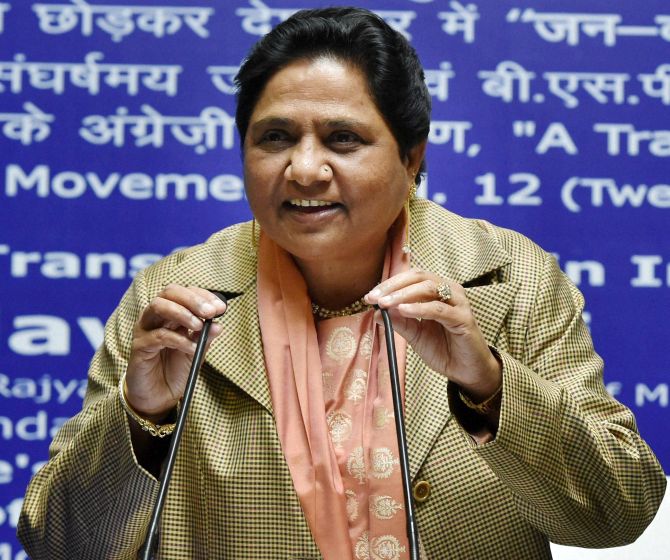 Hari Krishna Gautam, Lucknow district president of the Bahujan Samaj Party, has been working almost 16 hours a day over the past few months for the 2019 Lok Sabha polls.

He leaves home early and spends the day amidst the heat and dust of electioneering with the teeming BSP cadres, supporters and office bearers, besides holding/attending meetings and interacting with people.

The BSP, a cadre-based organisation, has managed to keep its distinct and conventional form of door-to-door electioneering, helping forge a deeper connection with people, especially during elections.

Although the BSP's personal-touch approach looks simpler, it is quite elaborate nonetheless.

For example, the party constitutes a sector comprising 10 to 12 booths at the local level. While each booth is served by a dedicated team of 23 office bearers, every sector additionally has another brass of 18 office bearers.

"This way, every sector of the party, which caters for a population of nearly 15,000, comprises almost 250 office bearers tasked with meeting people under their respective jurisdiction on a daily basis during the election time," says Gautam.

"We are reaching out to each voter at the booth level with the appeal of vote and support for our candidate from the Mohanlalganj Lok Sabha constituency in Lucknow district," he adds.

The party's personal reach-out mechanism is a far cry from other major political parties, which are largely dependent upon big public meetings, apart from employing media and modern tools to communicate with their vote bank.

Traditionally, the BSP has shunned the idea of a publicity blitz, although party supremo Mayawati marked her Twitter debut earlier this year.

The core method of communication with its constituency continues to be 'cadre-based' and personal connect, such as knocking each door or through nukkad sabhas (neighbourhood meetings).

The Mohanlalganj Lok Sabha seat, which is currently represented by Kaushal Kishore of the Bharatiya Janata Party, comprises 196 sectors of the BSP.

Under the pre-poll pact with the Samajwadi Party, the Mohanlalganj seat falls under the quota of the BSP, which fielded C L Verma to take on Kishore, one of the leading Dalit faces of the BJP's state unit after he won the 2014 Lok Sabha polls during the 'Modi wave'.

The BSP failed to win even a single seat while the SP won just five seats. Therefore, this election is crucial for the two parties to stay relevant in state politics.

Each booth-level team of the BSP is equipped with the voters' list and they have been visiting households to verify addresses and to collect mobile phone numbers.

"Lucknow district has more than 1.9 million voters and it is a humongous task of collecting the phone numbers of such a large population, yet we have, so far, collected details of nearly 50 per cent of voters and the task is still underway," says Gautam as he heads for canvassing in the Malihabad pocket of Lucknow district.

"I think she is paranoid about security and avoids going among the masses. This is then compensated by the door-to-door canvassing by her regional and state coordinators," Pradhan says, adding that the BSP is fortunate to have a strong grassroots cadre and a "captive vote bank."

The BSP is also being supported by BAMCEF (the All India Backward And Minority Communities Employees Federation, which was founded by the late Kanshi Ram) workers in mobilising voters.

The BSP has even asked supporters to shun television for two months during the entire election period due to the alleged biased coverage on news channels.

With the disclaimer of holding the fourth pillar of democracy in high esteem, Gautam nonchalantly says there was no point in watching news channels when they present a "distorted" picture of the election season and "unreliable" surveys.

Addressing the maiden Mahagathbandhan rally in Saharanpur on April 7, Mayawati cautioned BSP workers against the media, opinion polls and surveys, which could present a distorted picture and thus sway voting pattern.

"What Behenji said at the rally, we have already been following over the past two months," says Gautam, adding that the media downplayed the high turnout at the Saharanpur rally.

Meanwhile, its leaders negate any impact of Dalit leader and Bhim Sena founder Chandrashekhar Azad on BSP supporters, including Dalit youth. Azad has already been dubbed by Mayawati as a BJP agent, while he, in turn, blamed her for weakening the Bahujan movement by inducting non-committed leaders in the BSP. 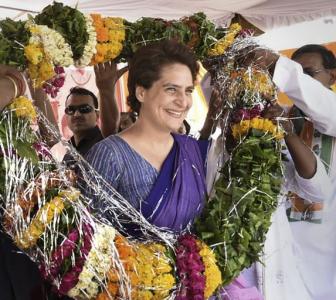