News
Business
Movies
Sports
Cricket
Get Ahead
Money Tips
Shopping
Sign in  |  Create a Rediffmail account
Rediff.com  » News » What you will see at the Republic Day 2023 parade

What you will see at the Republic Day 2023 parade

The Republic Day parade, which will begin at around 1030 am, will be a unique mix of the country's military prowess and cultural diversity, depicting the country's growing indigenous capabilities, Nari Shakti and emergence of a 'New India'. President Droupadi Murmu will lead the nation in celebrating the Republic Day from Kartavya Path in New Delhi on January 26, 2023.

Egyptian President Abdel Fattah El-Sisi will be the chief guest at the parade.

The events will culminate on January 30, which is observed as Martyrs' Day. The celebrations are marked by attractive performances from the Vande Bharatam group of dancers from across the country, tales of bravery by Veer Gatha 2.0 participants, melodious performances by school bands at the National War Memorial, the first-ever e-invitations, the largest-ever drone show and 3-D anamorphic projection.

The Republic Day parade, which will begin at around 1030 am, will be a unique mix of the country's military prowess and cultural diversity, depicting the country's growing indigenous capabilities, Nari Shakti and emergence of a 'New India'. The parade ceremony will commence with Prime Minister Narendra Modi visiting the National War Memorial where he will lead the nation in paying solemn tributes to the fallen heroes by laying a wreath.

Thereafter, the prime minister and other dignitaries will head to the saluting dais at Kartavya Path to witness the parade.

It replaces the vintage 25-pounder gun, reflecting the growing Aatmanirbharta in defence. Four Mi-17 1V/V5 helicopters of the 105 Helicopter Unit will shower flower petals on the audience present at Kartavya Path.

The parade will commence with the President taking the salute. The parade will be commanded by Lieutenant General Dhiraj Seth, Ati Vishisht Seva Medal, a second-generation Army officer. Major General Bhavnish Kumar, Chief of Staff, HQ Delhi Area will be the Parade Second-in-Command. The proud winners of the highest gallantry awards will follow.

The first contingent in the uniform of the 61 Cavalry will be led by Captain Raizada Shaurya Bali. The 61 Cavalry is the only serving active Horse Cavalry Regiment in the world, with the amalgamation of all the 'State Horse Units'.

Another highlight of the parade this year will be Veterans' Tableau, with the theme 'Towards India's Amrit Kaal with Resolve - A Veterans' Commitment'. It will provide a glimpse of veterans' contributions in the last 75 years and their initiatives in shaping India's future during 'Amrit Kaal'.

The Indian Navy contingent will comprise 144 young sailors, led by Lt Cdr Disha Amrith as Contingent Commander. For the first time ever, the marching contingent consists of three women and six Agniveers. It will be followed by the Naval Tableau, designed on the theme 'Indian Navy - Combat Ready, Credible, Cohesive and Future Proof'.

It will showcase the multi-dimensional capabilities of the Indian Navy, Nari Shakti and key indigenously designed and built assets under 'Aatmanirbhar Bharat'. The forward part of the tableau will illustrate the women aircrew of Dornier aircraft, highlighting all-women crew surveillance sortie undertaken last year.

The main section of the tableau will display the 'Make in India' initiatives of the Navy. There will be a model of the new indigenous Nilgiri class ship with a Dhruv helicopter deploying marine commandos. On the sides, models of indigenous Kalvari class submarines will be depicted.

The rear section of the tableau will display models of autonomous unmanned systems being indigenously developed under the iDEX-Sprint Challenge.

The Air Force tableau, designed on the theme 'Indian Air Force Power Beyond Boundaries', will display a rotating globe highlighting IAF's expanded reach, whereby it has been able to provide humanitarian assistance across borders, as also exercises conducted with friendly countries. 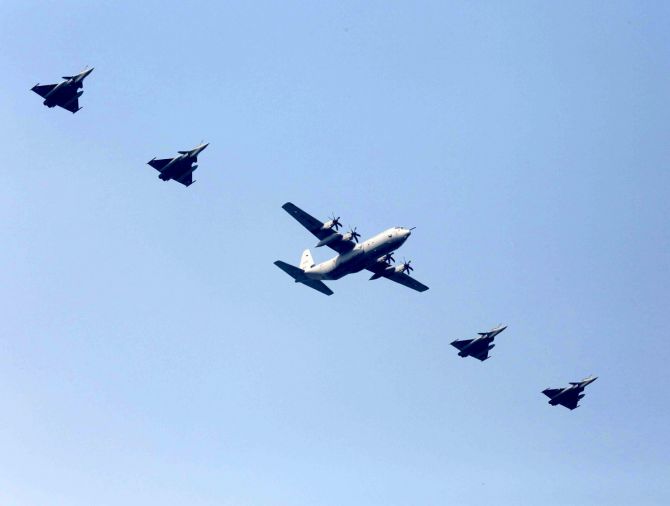 IMAGE: Indian Air Force aircraft, who will be part of the flypast. Photograph: Press Information Bureau

Defence Research & Development Organisation (DRDO) will showcase one tableau and equipment. The theme of the tableau is 'Securing Nation with Effective Surveillance, Communication and Neutralising Threats'. The first part shall display Underwater Surveillance Platforms, which include sonars like Ushus-2 for submarines, the Humsa series of sonars for ships and the Low-Frequency Dunking Sonar for helicopter launch surveillance.

Indigenously developed Wheeled Armoured Platform (WhAP), a modular 8X8 wheeled combat platform carried on a 70-ton Trailer will be displayed by DRDO in the form of equipment.

The ICG, with 157 ships and 78 aircraft, is capable of countering threats at and to the sea. The continuous vigil of the ICG has enabled the seizure of contraband worth over Rs 14,546 crore since its inception, including Rs 2,620 crore in 2022 alone.

Its reach and capability were demonstrated during the flag hoisting on 100 inhabited and uninhabited far-flung islands as part of 'Azadi ka Amrit Mahotsav'. The ICG has been a pioneer in women's empowerment, offering opportunities to women officers in all spheres.

Contingents of CAPF and Delhi Police The Camel Contingent of Border Security Force (BSF) will march past the saluting dais under the command of Deputy Commandant Manohar Singh Kheechee. For the first time, female camel riders will participate in the parade, showcasing women's empowerment in various fields.

The marching contingent of the National Service Scheme (NSS), comprising 148 volunteers, will march under the command of Aanchal Sharma from Himachal Pradesh, Regional Directorate of NSS, Chandigarh.

Pradhan Mantri Rashtriya Bal Puraskar is conferred on children with exceptional abilities and outstanding achievement in the fields of bravery, art & culture, sports, innovation and social service. Eleven winning children, in jeeps, will be driven down Kartavya Path.

Details of the 17 tableaux of States/UTs with their themes are as follows: Assam: Land of heroes and spiritualism

Tripura: Sustainable livelihood through tourism and organic farming in Tripura with the active participation of women.

Karnataka: Celebrating the Power of Nari

Another highlight of the show will be a thrilling motorcycle display by the Corps of Signals' Dare Devils team. They will enthral the audience with an array of formations, which will also include a Yoga display.

The grand finale and the most eagerly-awaited segment of the parade, the Fly Past, will witness a breathtaking air show by 45 aircraft of the Indian Air Force, one from the Indian Navy and four helicopters of the Indian Army.

The concluding Vertical Charlie manoeuvre will be performed by Rafale fighter aircraft.

Like last year, Doordarshan will broadcast cockpit videos during the flypast. The ceremony will culminate with the national anthem and the release of tri-colour balloons. 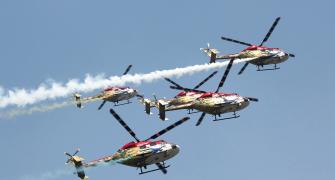 All Set For Republic Day Parade! 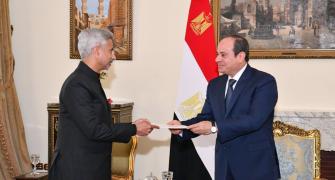 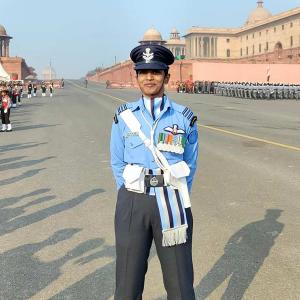 The Lady Who Will Lead IAF Contingent