What kind of 'Hindu dharm' does Modi follow: Rahul

Congress leader Rahul Gandhi accused the Bharatiya Janata Party and the Aam Aadmi Party on Tuesday of spreading hatred in the society and said Prime Minister Narendra Modi and Delhi Chief Minister Arvind Kejriwal were not interested in providing jobs to youngsters, but were keen on making one Indian fight another for staying in power. 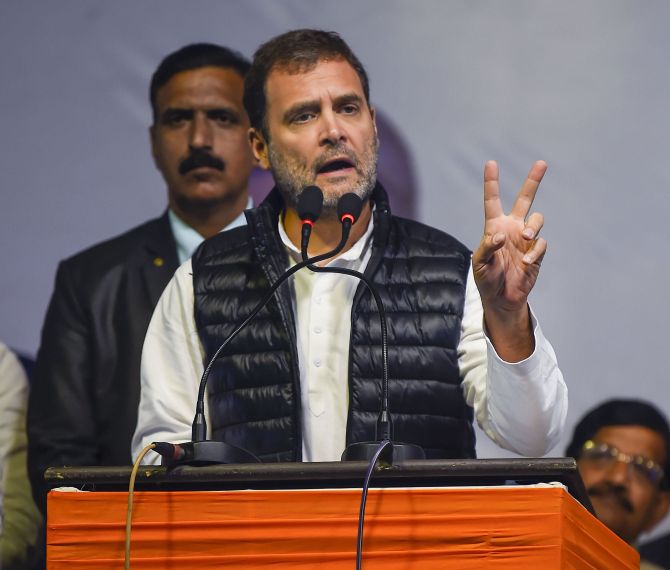 Addressing his first rally in the national capital in the run-up to the February 8 Delhi Assembly polls, he said the current environment in the country, the hatred, the violence and the attacks on women were harming India and people were not benefitting from it.

"Modi and the BJP may be benefitting from it, but Indians are not. If you want development and employment, you will have to erase hatred from the hearts of people," the former Congress president said.

He hit out at the BJP for not addressing the economic slowdown and the issue of unemployment, but instead, encouraging violence.

"They (BJP) talk about the Hindu dharm, they talk about Islam, they talk of Sikhism. They have no knowledge of religions. In Hinduism, Islam, Christianity, Sikhism-- where is it written that attack other people, suppress them?" he asked the crowd.

What kind of 'Hindu dharm' is this of Modi and the Rashtriya Swayamsevak Sangh (RSS) as Hinduism talked about taking everyone along, Gandhi said at the rally organised to garner support for the Congress candidate from Jangpura, Tarwinder Singh Marwah.

The aim of the BJP and the AAP was to spread hatred in the society, something the Congress could never do, Gandhi said.

"Do not harbour any illusion. Go to any person and you will find nationalism in his blood irrespective of his religion or whether he is poor or rich," he said.

"The person who makes 'deshbhakts' (patriots) fight among each other, can he be a deshbhakt?" Gandhi asked the crowd.

He also slammed Modi for not talking about the economy and unemployment in his poll speeches and said the prime minister did not have the guts to do it.

Modi talked about Pakistan but not about providing jobs and improving the economy, the Congress leader said.

Jobs could be created by making India a manufacturing hub, but not in the manner the government was working, he said.

"Narendra Modi and Arvind Kejriwal have nothing to do with this (creating jobs). They want to make one Indian fight another and stay in power," Gandhi added.

He hit out at Modi for promising two crore jobs annually, but not delivering on it and slammed the BJP-led government for demonetisation and the Goods and Services Tax (GST).

"The finance minister is not ready to say how many youngsters got employment. She said I will not say it as Rahul Gandhi will ask me questions," the Congress MP said as he slammed Finance Minister Nirmala Sitharaman's budget speech in Parliament as 'hollow'.

He also targeted the Centre for slashing corporate tax and claimed that loans worth Rs 3.5 lakh crore were waived of 15 crony capitalists.

"In my next speech, I will take out a list of how many projects Adani has been given by Modi. Airports and ports have been handed over. You will see Adani's and Ambani's names everywhere. This is not Narendra Modi's government, but a government of Adani and Ambani. Only 15 people benefit from it," Gandhi said.

Referring to coronavirus, he said the countries manufacturing in China were looking at India for taking on the mantle of a leading manufacturer.

"The whole world except China wants to invest in India. But when they look at India now, they see hatred, violence, rapes, goondaism, killings. Wherever you see in the last five years, one Indian talks to another Indian with hatred. This is not our history. This is a country of love," Gandhi said.

He accused the government of selling state enterprises such as Indian Oil, Air India, Hindustan Petroleum and the railways as well as the Red Fort.

"He (Modi) may even sell the Taj Mahal," the former Congress chief said.

Alleging that Modi and Kejriwal could only think about power, he said, "They can announce anything in two minutes to stay in power."

Referring to President Ram Nath Kovind's adress to a joint sitting of both houses of Parliament, Gandhi said there was no mention of employment in it.

He praised Marwah for always standing for people.

"Show one BJP leader who raised the 'Hindustan Zindabad' slogan in Pakistan. The Congress's Jangpura candidate did it and went to jail in Pakistan for it," Gandhi said. 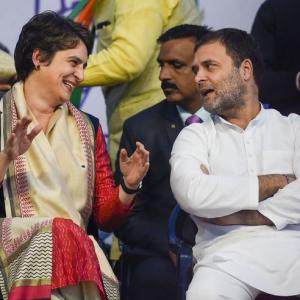