'What the Congress needs now is an ideological and social contrast to the BJP.'
'The Congress stable of princelings cannot do it,' argues Mohan Guruswamy. 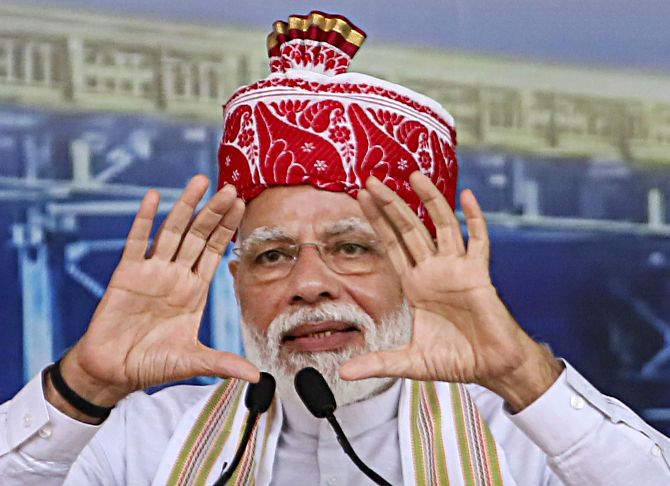 One thing can be said in Modi's favor.

He has made political dynasts objects of social media sneers and symbols of unmerited inheritances.

It may be another matter that Rahul Gandhi might be far better educated and genuinely qualified, but it is Narendra D Modi who is seen as the one with merit, because he came up the hard way.

In a country where over a million sit for the JEE to qualify for a few hundred places in the IITs, and where the winnowing process of selection for just about every admission or opening is very severe, be it a government medical college or the civil services or even to become a jawan in the military or police, the importance of being perceived as merited cannot be ignored.

The chaiwalla story is more compelling than the Doon School dynast.

It is no wonder then that Modi's rise is seen as merited and Rahul's ascension as unmerited.

The growing rejection of dynastic fate is in evidence all over the new India.

The new economic and social realities are compelling change.

Recently I saw a news item reporting the deaths of two sewer cleaners.

This is a commonplace occurrence, but what struck me was they had upper caste surnames.

In the new India, a chamar's son becomes a Zomato food delivery boy and the Aiyar family eats the food without ascertaining his caste.

If you want to know, the choice is clear -- lose your money and go hungry.

In a country where almost seventy percent of the population is below the age of thirty, the imagery of being merited is very powerful.

Former king Farook of Egypt once said, that in the end there would be only five kings -- four in the pack of cards and the King of England.

The same can be said of political dynasties.

They are fast growing out of fashion.

But make no mistake.

Some inheritances are legitimate.

A corporate scion is not perceived as unmerited.

For instance, movie actors who inherit looks and talent, and doctors and lawyers who inherit practices are seen as legitimate inheritors till their lack of merit shows up.

But when the doting parent or the fawning courtiers thrust a son or daughter, in the democratic age it is no longer seen as merited.

Political parties are not royal courts where a hapless Mohammed Shah Rangila or an indolent Bahadur Shah Zafar can be forced down upon a nation.

People have a way of showing how they feel about this.

In the recent Lok Sabha election, KCR's daughter Kavita was rejected in Nizamabad while the TRS won most of the seats.

In UP, Mulayam Singh won while his daughter-in-law was defeated. 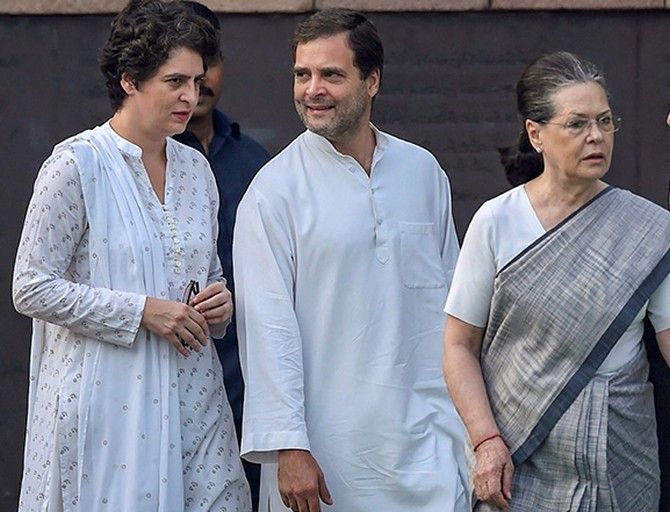 Rahul Gandhi rightly abdicated the Congress presidency after the party was soundly beaten in the last election.

The defeat was even more stupendous considering the party (with IUML) won 19 seats in Kerala, defeating a putative ally, and won another seven through the kind courtesy of the DMK.

This was a moment for the Congress to reinvent itself or go back to the past when it had a real inner party democratic process and debate.

The Congress party had a conference today with the dowager empress presiding.

The absence of democracy was evident.

How did Sonia Gandhi become the president once again? And then look at the quality of discussion.

The handpicked working committee had a sullen unanimity in its predictable diatribe against the badly floundering Modi government.

The Congress party leadership resolved that it would create a new Congress Seva Dal to replicate the RSS's booth level election fighting machine.

Clearly the analysis was that it was the RSS's booth level organisation that won the BJP the election.

Nothing can be further from the truth.

What won the election was the demagogic charisma of Modi who cast a spell with a mishmash of religious rhetoric, outright lies and distortion of, let alone the past, but even recent history.

The challenge for the Congress is to create a competitive imagery that will rekindle the magic it had once cast to combat the RSS's pernicious ideology.

If it can do that the election fighting booth level machine will automatically happen.

In the modern age the currency that will keep troops motivated and fighting are ideas and dreams.

The problem is that the Congress still thinks currency is the only king.

In his most famous play Julius Caesar, William Shakespeare has Brutus urging his comrades to seize a fleeting opportunity in an armed conflict saying: 'There is a tide in the affairs of men/which, taken at the flood, leads on to fortune.'

The Congress party had such a moment in history when it was to find a leader to succeed Rahul Gandhi.

Four names seem to have been discussed.

In the current circumstances, the later two, both foreign educated 'born with a silver spoon' dynasts, would have been lacerated by the pracharak army.

Even Mukul Wasnik, a bit of a lesser dynast, and reputedly backed by Ahmed Patel, might not have been able to stand up to the political bullies and liars ranged on the opposite side.

Mallikarjun Kharge might have well been the Congress president who could have braved the saffron flood and taken the Congress to a new political and ideological haven.

The courtiers had their way and once again Sonia Gandhi was asked to helm the leaky boat. Most of us do not fulfill our potential because we are not at the right place when an opportunity to do so arrives.

Whether it is a hero in war or a political leader who achieves greatness, it is all a matter of being where the action is.

It is pure kismet.

Take, for instance, the case of Mallikarjun Kharge, the former leader of the Congress party in the Lok Sabha (2014-2019).

He would have never have been near centre stage if the Congress didn't get decimated in 2014.

The election saw Rahul Gandhi clearly projected as the national alternative to Modi and he got thumped.

Never a confident leader and at best a diffident speaker, with little of what makes a person charismatic, Rahul Gandhi would have hardly been a foil to Modi, a communicator par excellence and a rabble rouser without a peer.

So the Congress reached down to pluck Kharge from obscurity mostly because he was the only one other leader with some standing in the party.

On June 12, 2014, replying to the agenda outlined by the NDA government in the Presidential address he said the NDA is repackaging work done by the UPA and asked the Modi government to implement the promises made without trumpeting and 'arrogance'.

Kharge invoked Mahabharata and said though Pandavas were few in number as compared to Kauravas; still they could not be defeated. 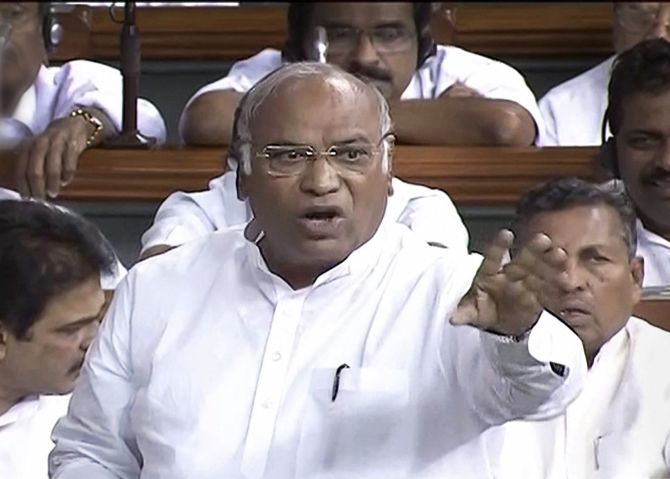 IMAGE: Mallikarjun Kharge, the Congress leader in the Lok Sabha from 2014 to 2019.

Rajnath Singh, a RSS man to the core, did not have an answer, as his shakha training didn't provide him with the true historical backdrop of India.

What the Congress needs now is an ideological and social contrast to the BJP, someone who can dismiss the RSS mythology, with the contempt it deserves.

The Congress stable of princelings cannot do it.

Clearly the RSS sees Kharge as the danger man.

Till Sonia Gandhi announced herself as the Congress president again, the RSS bot factories were churning out garbage about how Kharge was worth Rs 1,000 crores, then Rs 10,000 crores.

Coming from a party that spent over Rs 50,000 crores in two consecutive Lok Sabha elections, and whose leader appears dressed in an insignia suit and Gucci eyeglasses, this is rich.

When somebody like Kharge points this out, it will cut deep.

Unfortunately, the Congress behaves like the latter day Mughals, with a durbar in place of an empire. 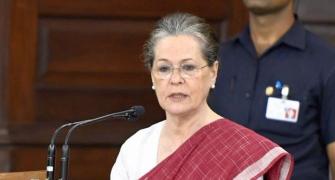 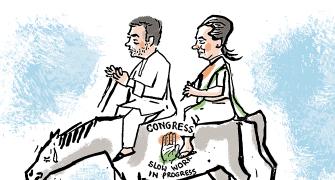