'Since the two successive drubbings of the Congress have rung the alarm bells about the party's future, the need to chart a new course cannot be delayed any further,' says Amulya Ganguli.

Rahul Gandhi is right about the Congress's need for a non-Gandhi president. But that is not the only criterion. For the Congress to break the shackles of dynastism, it has to choose someone who will not be a puppet of the party's first family.

Since the Congress's future will be linked to the chief's, it is only when he or she stands tall (amidst the ruins of the party at present) and is seen as capable of giving it a new direction in the realm of ideas and of breathing life into the currently moribund organization, will there be any chance of the 134-year-old party recovering its lost glory.

It is no secret that the glory was lost because the Congress lost its way.

And since the Nehru-Gandhis have always been at the helm (except for brief periods when K Kamaraj or P V Narasimha Rao and a few others were at the top), there is no way that the blame for the party's blunders can be placed on someone else.

Among these were the Emergency, the anti-Sikh riots and the overturning of the Supreme Court's Shah Bano judgment.

It is the last blooper which is relevant in the present circumstances because it paved the way for the BJP's rise by confirming its charge of minority appeasement by the Congress.

To counter this phase of Indian politics which tends to darken the country's 'soul', as The Guardian of London has said, a new Congress president has to return to the party's old secularism and not take recourse, as some of the other chiefs have done, in 'soft' Hindutva in a futile attempt to appear to be more Hindu than the BJP or at least as much of a Hindu as the saffron outfit.

But there was no need to play such silly games.

Most people see it as an insincere ploy.

Yet, the fact that they were indulged in showed a numbing of the party's intellect.

And that is an inevitable consequence of the absence of internal democracy, when the party begins to resemble a zamindari household with the family being surrounded by sycophantic courtiers.

The deadening of the intellect not only robs an organization of the mental capacity to evolve novel means of taking on an opponent -- and not via imitation -- but it also makes the followers develop a pathetic dependence on the masters so much so that they fear that the organisation will fall apart if the prop of the first family is removed.

Since the two successive drubbings of the Congress have rung the alarm bells about the party's future, the need to chart a new course cannot be delayed any further.

The bells had tolled earlier, too, but the Congress's response was a bureaucratic one of setting up a committee under a pliant chairman to analyse the causes and then shelve the report.

The committee route was preceded by the routine offers of resignation by the party president, which was predictably rejected by docile party members.

The Congress has avoided the charade this time although there were tearful members who protested against Rahul Gandhi's offer to step down.

The Congress needs a new zamindar from outside to move into the decaying, crumbling palace and begin the repair work.

But who will it be?

Amrinder Singh would have been the ideal choice.

But who will take his place in Punjab?

As if the feudal bug wasn't enough of a hindrance to healthy growth, the Congress has also unfortunately suffered a series of untimely deaths -- Madhavrao Scindia, Y S Rajashekhara Reddy, Rajesh Pilot -- while its leaders in the south like Siddaramaiah appear too immersed in state-level politics to make the transition to the national level, and A K Antony seems too subservient to the first family.

Apart from the untimely deaths, what has also deprived the Congress of having a strong bench strength -- as they say about cricket teams -- is the stifling of local talent by nervous 'strong' leaders like Indira Gandhi, who did not like challengers to emerge from the boondoks.

So, the country waits for a new saviour to rescue the Congress from its dire straits.

Cometh the hour, but where is the man? 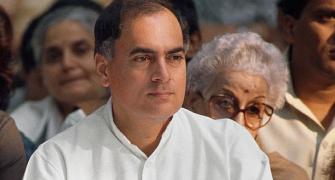