Seven years is a long time for any of Modi's promised actions to show up.
If voters are angry and cynical today, it is because the rhetoric stings, argues Ramesh Menon.
All Illustrations: Uttam Ghosh/Rediff.com 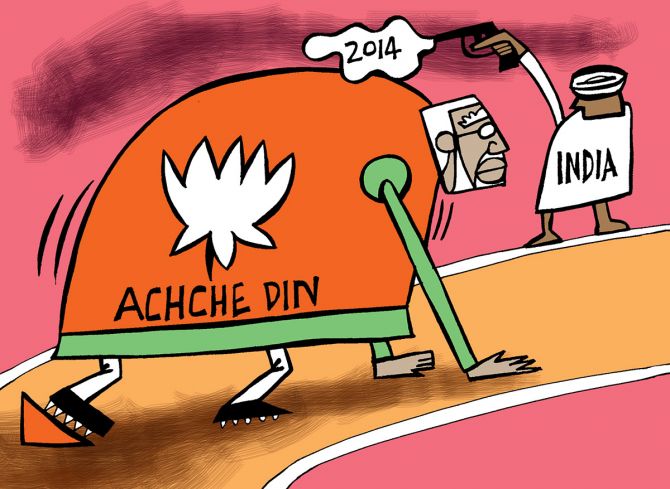 The Lok Sabha elections in 2014 was a historic one the likes of which independent India had never witnessed.

It came on the cusp of an emotive India Against Corruption movement led by activist Kisan Baburao 'Anna' Hazare. All of a sudden, a short humble man in a dhoti and kurta had triggered off the imagination of the Indian electorate: Change has to happen for India to transform.

Young professionals, students, teachers, businessmen, and many others joined in echoing the need to bring about a change of government.

Some young Indians abroad winged back to India to volunteer in what was seen as the most historic public movement against corruption.

Suddenly, there was new hope all over India.

You did not have to be an astrologer to predict that the Manmohan Singh government did not have a fighting chance to snake its way back to power.

The RSS and the BJP backed the anti-corruption movement flocking to Hazare's meeting sniffing an opportunity to ride into power.

They got even Baba Ramdev on to that platform to demand that lakhs of crores of Indian money stacked in the black market abroad had to be brought back.

They underlined that only a new political dispensation like the BJP would be able to do that.

India thought there was just no alternative to him. India was hungering for change and he stepped in at the right time. Modi was the man they thought had a magic wand.

In the Lok Sabha elections of 2014, Modi swept the BJP into power with his National Democratic Alliance winning an absolute majority.

The BJP itself won 282 seats, its highest tally ever while the Indian National Congress just won 44 seats, its lowest ever tally.

Modi had been accepted by the electorate to lead the country, though his party had just won 31 percent of the votes.

He had a brute majority and could do want India thought he would. History gifted him an opportunity that no Indian leader ever had.

There was so much to do. Expectations were high.

A new political culture had to be introduced where the nation and people's needs were greater than the party.

New job opportunities had to be created for educated youngsters and new skills for the unskilled.

The promise was to create lakhs of jobs in different sectors.

Modi's promise of 'sabka saath, sabka vikas', had to be sculpted into a real dream.

Everyone felt good to hear that ache din slogan as it ignited hope.

There were other promises like overall economic prosperity, social unity and inclusive development to be kept. 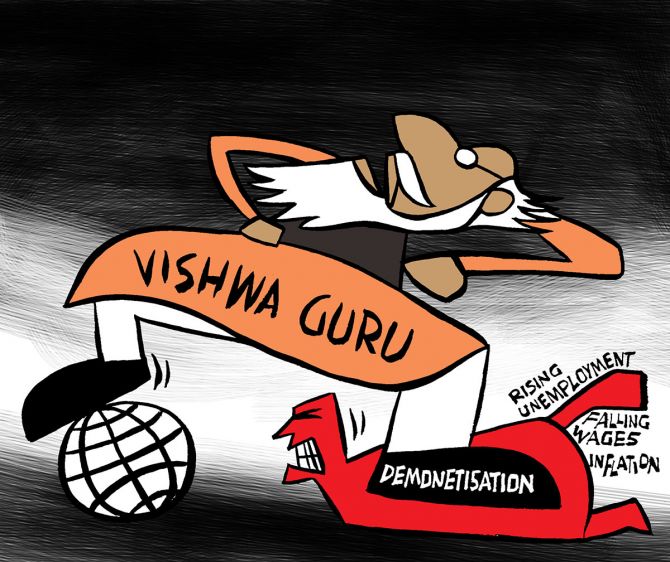 At one point Modi said he needed ten years to transform India.

He got it. Seven years is a long time for any of his promised actions to show up even though it takes time for anything to take a concrete form.

If voters are angry and cynical today, it is because the rhetoric stings.

Divisive politics and hatred are being fanned like a planned strategy.

People were patient. They wanted to give him time. Five years passed and they saw the need for continuity to help him do what he had promised.

The electorate rewarded the BJP with 303 seats in 2019. Another landslide. The BJP-led NDA won 353 seats while the Congress got just 52 seats.

Again, hope was kindled that now there would be change.

But the BJP got busy sledgehammering their way to power in the states where they did not have a majority by engineering defections. As if the goal was just capturing power.

It gave rise to chauvinism, a cut-throat political culture, belligerent majoritarianism, cultural and communal divides, rising violence, insecurity, and rising cynicism about the idea of India. 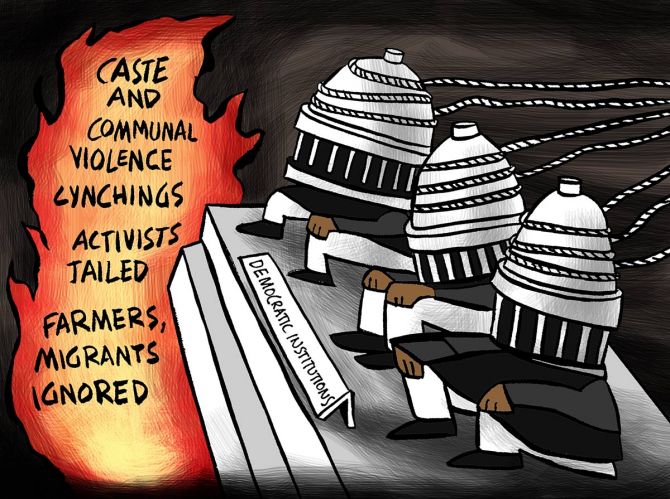 Do a search on Google on what our ministers have said about the pandemic and their recommended cures and things to follow to drive it away.

You will then get the drift. See how scientific advice was ignored time and again.

Match the figures of cremations and the government data of the dead during the pandemic.

Numerous reports from various cities have shown that the official figures are not even close to the real figure.

The survey found that about 80 percent of Indians did not see anything to be on the right path and had little hope that things would improve in the near future.

Images of caste and communal violence.

Atrocities against the disadvantaged.

Activists jailed for speaking the truth to power. Struggling migrants trying to get a foothold and three meals a day.

An aggressive Chinese army that continues to sit on Indian land.

Subversion of state governments where opposition is in power.

Bulldozing legislation in Parliament without debate. 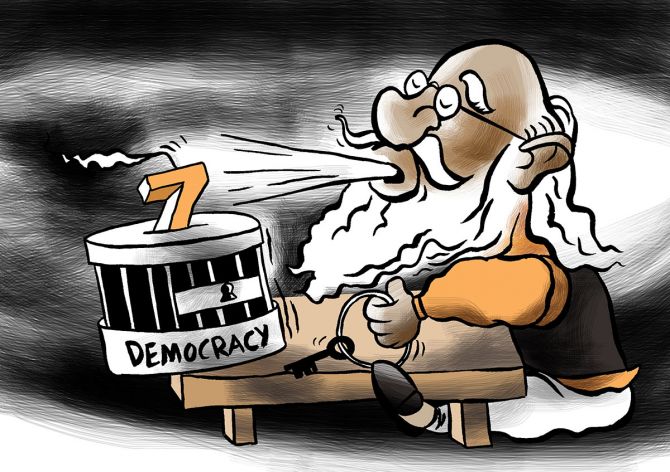 Federalism not being respected or followed in spirit.

Demonetisation did not help anybody.

Consumer demand down as people are very apprehensive and want to save for emergencies.

Wrong priorities like building a new parliament and the central vista when a pandemic was raging and people were dying all over the country.

Whitewashing all these realities with propaganda and publicity, will not work. The pain runs very deep.

Saying that the Congress was no better does not jell as the electorate made a conscious decision to throw them out to get a better alternative and not struggle with one which is no different.

The trust is broken. With a collapsing health infrastructure the dominant visual all over India, it was clear that the government had faulted on its planning and was not at all ready to handle the second wave.

India did not think it necessary to shop for vaccines when the rest of the world was busy stacking them. We were the pharmacy of the world, we were told. And, the vaccine capital of the world.

It took a severe crack from the Supreme Court for India to draw out a vaccine policy of sorts and announce how it planned to vaccinate its population.

It could have become an economic powerhouse.

It could have even inspired Indians settled abroad to return and be a part of the new India dream.

The collateral damage may be permanent.

Modi has missed an opportunity of a lifetime.

Ramesh Menon -- author, an award-winning journalist, editor of The Leaflet, educator, and documentary film-maker -- is the author of Modi Demystified: The Making of a Prime Minister. 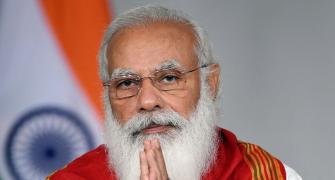 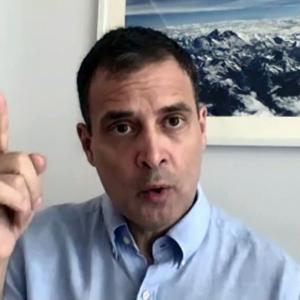