News
Business
Movies
Sports
Cricket
Get Ahead
Money Tips
Shopping
Sign in  |  Create a Rediffmail account
Rediff.com  » News » UP Polls: What next for Akhilesh Yadav?

UP Polls: What next for Akhilesh Yadav?

In March 2017, he finds himself in the opposition.

At this turning point, Rediff.com looks back at the Samajwadi Party leader's political trajectory. 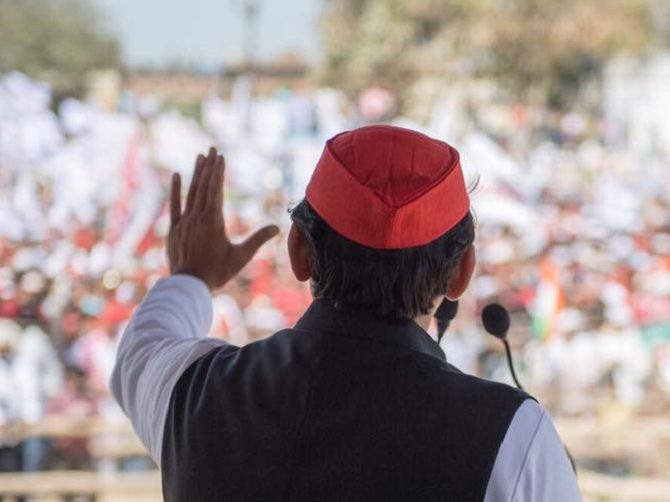 IMAGE: Akhilesh Yadav will not only have to take responsibility for the Samajwadi Party's defeat, but also overcome criticism from the family and the party.
Photograph: Courtesy @yadavakhilesh/Facebook.com.

It was a by-election 17 years ago that thrust the scion of the Samajwadi Party, Akhilesh Yadav, onto the political landscape. He was elected to the Lok Sabha from the Kannauj constituency of Uttar Pradesh.

He went onto win the Lok Sabha elections from Kannauj for the next three consecutive terms.

But Akhilesh really emerged as a political force in the run-up to the 2012 UP Assembly elections.

His father, Mulayam Singh Yadav, anointed him as the SP's president in Uttar Pradesh paving the way for Akhilesh to woo the state with an innovative style of campaigning. The younger Yadav, smiling and affable, led cycle rallies through the state breaching the distance that had grown between the voters and MSY, aka Netaji.

The rallies were a tremendous success as it pulled in voters of different communities, especially the youth. And thanks to Akhilesh's 'Ummeed Ki Cycle (cycle of hope)' the SP rode into the UP Assembly with ease.

After the SP came to power in UP in March 2012, defeating Mayawati's Bharatiya Samajwadi Party, Akhilesh resigned as member of the Lok Sabha to become Member of the Uttar Pradesh Legislative Council.

He was also appointed the leader of the Samajwadi Legislature Party, and at the age of 38 years, he became the youngest chief minister of UP.

Akhilesh, who holds an Environmental Engineering degree, had then told Rediff.com, "UP badly needs infrastructure, good roads, more power, good irrigation facilities, educational institutions should come to UP more so we can provide cheaper education here, health schemes should be implemented and hospital should be good. Basically, UP needs a lot of attention on infrastructure."

As the chief minister, the consensus seemed, he was involved and effective on most planks, barring crime.

In a 2014 interview, Akhilesh had said, "We have done a lot for the people of the state. Let me give you an example. Uttar Pradesh is a huge state, but it has only two all-weather swimming pools -- one in Saifai (MSY's hometown) and one in Lucknow. The other day a group of students from Noida met me. They want to hold a swimming competition but they have no pool. Why should this be the case?"

Asked if water, electricity and roads weren't bigger needs, he had said, "Sure, that's why I am building an eight-lane Agra-Lucknow Expressway that will touch Kannauj and Mainpuri. I read somewhere that if there is no road, there can be no economy -- double the speed, triple the size of the economy. You will see the amazing results of this road. And, the state government is building it using its own resources."

Despite scepticism about his ability to pull it off, the expressway opened for commuters in December 2016, cementing his image as a development oriented progressive leader.

As the Mint noted, "Not only did the chief minister work at reinventing himself, appealing to the aspirations of the voters of UP -- especially the youth, women and farmers, he also made efforts to refurbish the image of the Samajwadi Party. Schemes like UP-100, an emergency police service, was launched to shed the governance baggage associated with SP."

It was a given then that Akhilesh would lead the part into the 2017 elections too. Until the Yadav family house of cards began to crumble.

A family feud started in June 2016 when his uncle Shivpal Yadav announced merger of mafia don Mukhtar Ansari's Quami Ekta Dal with SP, and Akhilesh took a stand against it. It divided the family into two feuding groups with Akhilesh pitted against his father. While MSY stood by his brother Shivpal, his other brother Ram Gopal Yadav supported Akhilesh.

The feud peaked on December 30 2016 when MSY fired Akhilesh from the party, only to be readmitted the next day. Akhilesh was then elected as the national head of SP at his party's national convention in Lucknow, replacing MSY.

The fight also led to the two factions battling over the party symbol, which the Election Commission finally gave to Akhilesh's group.

Armed with the EC order, Akhilesh and his wife Dimple, now the Member of Parliament from Kannauj, went ahead and forged an alliance with the Congress party.

Though he then went full throttle into the campaign, the family feud and -- as the numbers now suggest -- the alliance had done their damage.

According to Dr A K Verma, director, Centre for the Study of Society and Politics, Kanpur, Akhilesh's moves came a little late. "Had this courage (to take on MSY) been demonstrated a little earlier Akhilesh would have the time to mould public opinion. By this time public opinion has almost been formed and it is the only floating voters of 7 to 8 per cent who normally decide the fate of an election."

It shadowed Akhilesh's 'Kaam Bolta Hai' development platform in the face of the aggressive campaign mounted by the Prime Minister Narendra Modi-led Bharatiya Janata Party and UP's penchant for not bringing back the incumbent.

Akhilesh Yadav, now 43, will be the leader of Opposition in the UP assembly.

But as he makes that transition, he will not only have to take responsibility for his party's defeat, but also overcome criticism from the family and the party.

Though it is likely that he will continue as the SP national president, it is just as likely that it won't be without facing rebellion from the MSY and Shivpal Yadav sympathisers within the party.

How Akhilesh Yadav consolidates the party before the next elections will prove whether he has the ability to be a successful leader on his own. 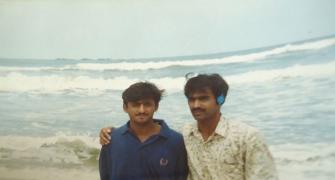 Akhilesh Yadav, like you have never known him before 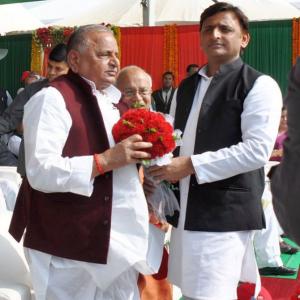 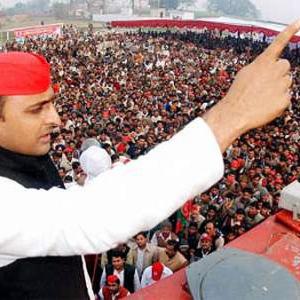