UP will enact population control law 'at right time' with fanfare: CM

The state government will bring a law for population control 'at the right time,' Uttar Pradesh Chief Minister Yogi Adityanath said on Tuesday. The government had in July unveiled a policy aimed at stabilising the population in Uttar Pradesh and reducing maternal and infant deaths in a time-bound manner, with Adityanath terming rising population a 'hurdle in development.'

"Everything is done at an appropriate time. The media earlier used to question the Bharatiya Janata Party on when it would announce a date for the Ram temple's construction, but the prime minister (Narendra Modi), despite the Covid-19 pandemic, laid the foundation stone of the temple in Ayodhya on August 5 last year, and all need to be happy now," Adityanath said at a conclave.

At the News 24 conclave, when asked about his recent abba jaan remark, the chief minister said, "They (opposition) want the vote of Muslims but are getting irritated with abba jaan."

In Kushinagar, Adityanath, in an apparent attack against the Samajwadi Party had said people who say abba jaan used to digest all the ration earlier.

On the population law for Uttar Pradesh, the chief minister said, "Everything has a right time and has to be done at the right place."

"When the population law is brought, it will be done with fanfare, in the knowledge of the media as we do not believe in doing anything silently," Adityanath said.

In July, a draft bill on population control was put up on the website of the Uttar Pradesh law commission, inviting suggestions from the public till 19th of the month.

It states that people having more than two children in Uttar Pradesh will be debarred from contesting local bodies polls, applying for government jobs or receiving any kind of subsidy.

The draft bill also seeks to prohibit promotions in government jobs for such people, while offering incentives to those limiting their children to two.

The law commission is said to have handed over the draft bill to the government.

On SP president Akhilesh Yadav's tweet claiming that a record number of riots have taken place in the state, Adityanath said, "The National Crime Records Bureau states that there have been zero communal riots in Uttar Pradesh."

Asked about Yadav's assertions that he is inaugurating works done during the SP government, the chief minister said, "The situation that had emerged in 2017 of the pair (Congress and SP alliance for the elections) coming together, it is their nature to humiliate the state."

"The BJP is forming the next government with over 350 seats in the coming assembly elections," he said.

To a question on whether he would be chief minister again, Adityanath said, "If you say so I accept it. Thanks for your good wishes."

Polls for 403-member Uttar Pradesh assembly are due next year. The BJP had won 312 seats last time. 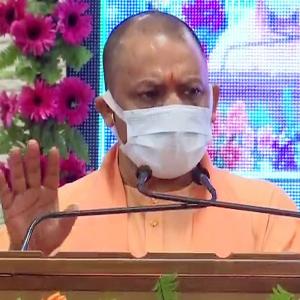 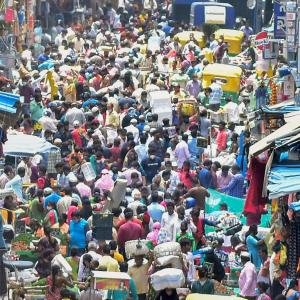 No govt job, subsidy if more than 2 kids: UP draft law