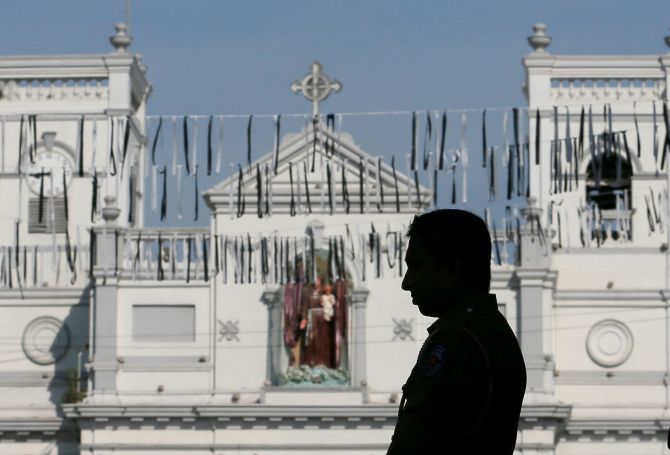 IMAGE: A security personnel observes three minutes of silence as a tribute to victims, two days after a string of suicide bomb attacks on churches and luxury hotels across the island on Easter Sunday, near St Anthony Shrine in Colombo, Sri Lanka on Tuesday. Photograph: Dinuka Liyanawatte/Reuters

With the death of two more Indians, the total number of Indian nationals who died in Sri Lanka rose to 10 on Tuesday after a string of devastating suicide blasts tore through churches and luxury hotels across the country on Easter Sunday.

'Regret to confirm the deaths of two more Indian nationals Mr A Maregowda and Mr H Puttaraju in the blasts in Sri Lanka on Sunday, taking the total number of Indian deaths in the tragedy to 10 as of now,' the Indian High Commission in Colombo tweeted on Tuesday.

'Indian High Commission in Colombo has conveyed that National Hospital has informed them about the death of three Indian nationals,' she tweeted on Sunday.

The names of both Maregowda and Puttaraju had figured in the list of missing Janata Dal-Secular workers tweeted by Chief Minister H D Kumaraswamy on Monday.

Among the Indians killed in the deadly blast there were four JD-S workers from Karnataka, who were on a visit to Sri Lanka, Kumaraswamy said on Monday in Bengaluru.

The dead members are Ramesh, Chandrashekhar, Rangappa and Hanumantharayappa, he had said.

Sri Lankan Foreign Ministry later in the evening confirmed the death of one more -- Shivakumar.

However, there was no confirmation about her from the Lankan authorities.

The agonising pain and wait for over 48 hours finally came to an end for the family of 37-year-old Puttaraju, a JD-S worker, with the High Commission confirming his death.

"We just got to know about his death, Sushma Swaraj has tweeted. Finally we have heard what we were suspecting," a friend of Puttaraju's brother Rudresh said.

"It was a long wait... While those with him (Puttaraju) were declared dead and their bodies have been traced, we had not got any information about his status," he said, adding he was unable to speak further.

A holiday in Sri Lanka after a gruelling campaign for Lok Sabha polls had pushed the JD-S workers to the jaws of death when the blast happened very close to the dining table as they sat for breakfast at Shangri La hotel in Colombo, one of the major targets of the deadliest terror strikes in the island in recent times.

Most of the victims had phoned their families and informed them about reaching Colombo safely, even as death was staring at them with the blast happening minutes thereafter.

Meanwhile, Kumaraswamy said, he has spoken to the Indian High Commission officials and requested them to speed up the process of bringing the mortal remains of the deceased to the state at the earliest.

'I spoke to the Indian HighCommission @IndiainSL t'day and enquired about the situation with regard to people from Ktka who were injured in the #TerrorAttack.

'I have requested them to speed up the process of bringing the mortal remains of the deceased to the state at the earliest,' he tweeted.

Seven suicide bombers believed to be members of an Islamist extremist group -- the National Tawheed Jamath (NTJ) -- carried out a series of devastating blasts that tore through three churches and luxury hotels in Sri Lanka on Easter Sunday, killing 310 people and wounding 500 others, including Indians, in the country's worst terror attack.

No group has claimed responsibility for the attacks, but police have so far arrested 24 people -- mostly members of the NIJ -- in connection with the blasts. 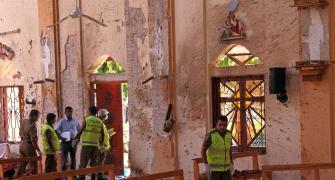