At least two people were killed and 45 injured by a magnitude-6.5 earthquake that knocked down houses and buckled roads in southern Japan on Thursday.

The quake struck near Kumamoto city on the island of Kyushu at a depth of 11 kilometres, the Japan Meteorological Agency said, adding that there was no tsunami risk.

The deceased were from the hardest-hit town of Mashiki, about 15 km east of Kumamoto city.

The JapaneseRedCrossKumamotoHospital said it had admitted or treated 45 people, including five with serious injuries.

He feared that there could have been more people buried under debris or trapped inside the damaged houses.

“Because of the night darkness, the extent of damage is still unclear,” he said.

One of the victims in Mashiki died after being pulled from the rubble, and the other was killed in a fire, officials said. A third person rescued from under a collapsed building is in a state of heart and lung failure.

Dozens of people abandoned their homes and gathered outside Mashiki town hall, sitting on tarps well after midnight. Some wrapped blankets around their shoulders against the springtime chill.

Prime Minister Shinzo Abe told reporters that the government has mobilised police, firefighters and self-defense troops for the rescue operation.

There were multiple aftershocks also, the largest one with a preliminary magnitude of 6.4 shortly after midnight, according to the Japan Meteorological Agency. 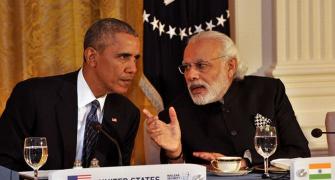 As PM leaves for Riyadh, here's what India promised at Nuclear Security Summit