The Haryana police on Saturday arrested two persons, including a woman, in connection with the murder of a Congress leader in Faridabad.

'Roshni and Naresh made available weapons to accused Vikas alias Bhalla, a resident of village Dhanwapur, and Sachin of village Kheri in Faridabad district, involved in firing along with two other persons,' he said in a statement released on his Twitter account.

Naresh has identified Vikas in the CCTV footage and informed that he is the same person to whom he made available the weapons, Virk added.

He said the car used in the murder of Chaudhary has also been recovered.

Police said there was a dispute between Chaudhary and Kaushal over money.

Congress president Rahul Gandhi had condemned the killing and said it reflects the deteriorating law-and-order situation in the state.

Chaudhary, a spokesperson of the state Congress, was parking his car outside a gym in sector 9 here when the assailants fired 12-15 bullets at the vehicle from two sides, killing him on the spot, police had said.

A murder case was registered and several police teams were formed to nab the assailants. Virk had earlier said the killing of Chaudhary appeared to be connected with his own criminal background.

"As per the leads so far Chaudhary had a criminal background and 13 FIRs of extortion, kidnapping, attempt to murder were registered against him since 2007 in Haryana and Uttar Pradesh. His murder appears to be connected to his own criminal background," the ADGP (Law and Order) had tweeted following the killing. 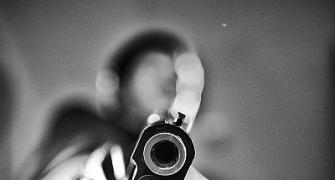