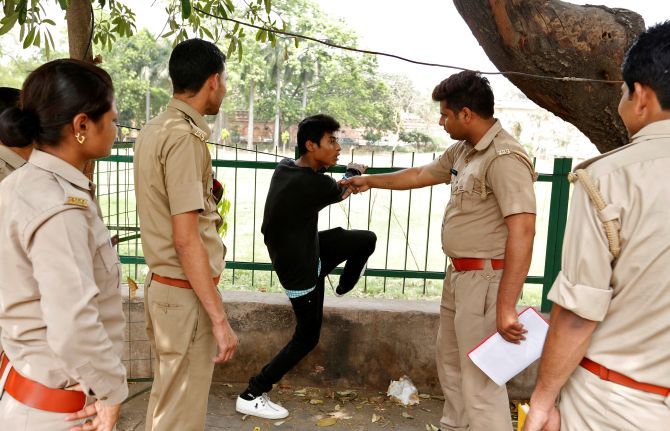 Days before Uttar Pradesh Chief Minister Ajay Singh Bisht -- aka Yogi Adityanath -- completed a year in office on March 19, armed miscreants broke into the house of a Bharatiya Janata Party legislator's kin in the state capital Lucknow and, after brutally assaulting the victims, decamped with valuables worth hundreds of thousands of rupees.

On the same day, the son of a former UP legislator shot a trader in the posh Trans-Gomti area over a money dispute. The victim succumbed to wounds the following day.

These are not isolated incidents of crime. Lucknow continues to be rocked by such cases of burglary, theft and murder nearly every day.

The situation is understandably worse in other parts of Uttar Pradesh even a year after the chief minister made the ambitious poll promise of making UP a 'crime-free zone'.

Not only heinous crimes, but crimes against women and incidents of eve-teasing have not witnessed a perceptible drop, despite the formation of the much-hyped anti-Romeo squad by the state government to check eve-teasing, stalking and harassment of women soon after coming into power.

"The routine eve-teasing and catcalls had actually ebbed after the Adityanath government had come to power owing to proactive and intense policing. However, eve-teasing soon reverted to 'normal' as weeks passed by, and now it's the same old situation," says Priya, 41, who takes public transport for commuting to work every day.

When it comes to other forms of crime against women, there has been no abatement either.

Shivani (name changed), a teacher and mother of two, says the situation is as bad as during the previous regimes so far as safety of women is concerned in Lucknow.

"The incidents of chain snatching in the city are far too many. I have stopped venturing out in my colony late in the evening since there is always a sub-conscious fear of becoming the next victim."

Yet industry captains were quite generous in heaping praise on Chief Minister Bisht for his 'good governance' and the 'improved' law and order situation in the state during the inaugural ceremony of the UP Investors Summit 2018 in Lucknow in February.

The government claimed the summit drew an overwhelming response from investors, fetching the state investment proposals worth Rs 4.68 trillion.

Indeed, this is a major achievement considering that during similar conclaves held under the previous Mayawati and Akhilesh Yadav regimes, the total investment proposals never exceeded the Rs 500 billion mark, and only a fraction of this money eventually came into the state as most projects failed to see the light of day.

Even though people in the state may still feel unsafe, it is the chief minister's tough posturing that is giving everyone hope.

The chief minister has given a free hand to the state police to deal with trigger-happy criminals.

Over the past year, the police has gunned down 45 criminals in 1,350 encounters and arrested 3,150 criminals.

The crackdown has also seen four policemen lose their lives.

Bisht, during his stint as the Gorakhpur MP, had cultivated the image of a leader with an unsparing outlook towards law and order.

After coming to power, he delivered a clear message to the police: Return bullets with bullets.

The crackdown has struck fear in the hearts of criminals, and the government claims it has achieved the desired results.

Indeed, there have been reports of criminals cancelling bail and surrendering before the police, fearing they could be killed in encounters.

There have also been reports of criminals carrying placards seeking mercy and offenders approaching the police with affidavits proclaiming they have given up criminal activities.

For a state with one of the highest crime rate, however, this may be the early days in the long-drawn fight against criminals.

In 2016, UP reported the highest number of heinous crimes, including murder and crimes against women.

The chief minister has put the blame for the state's criminal notoriety squarely on his predecessor Akhilesh Yadav's regime, and accused the previous government of harbouring criminals.

However, with the state police pursuing only wanted and notorious criminals, while leaving alone petty criminals, people on the streets are still wary.

Commenting on the state's war on criminals, former UP director general of police Vikram Singh says, "If one has undergone surgery yet the expected relief is missing means that either the surgery was erroneous or the wrong part had been surgically operated."

"The police should go after criminals who have been active over the past 12 months for sending out the right message to such desperadoes. If the crimes keep happening despite tough action and encounters mean that the cops need to realign their priorities and focus on their targets," he adds.

Meanwhile, the Opposition parties and human rights activists have criticised the chief minister for the rise in the number of police encounters.

Last year, the National Human Rights Commission issued a notice to the state government over police encounters and sought a report on allegations that the dispensation 'endorsed' killings in encounters.

The NHRC observed if the law and order situation was not satisfactory, the incumbent government could not resort to actions, which could be construed as 'extra judicial killings' of alleged criminals.

Besides, the Opposition parties, especially the Samajwadi Party, have accused the police of 'staging encounters' for securing departmental promotions.

This allegation was made against the backdrop of a fake encounter in Noida on the night of February 3, in which a police sub inspector was found guilty of criminal conspiracy and murder. He was subsequently suspended and sent to jail.

Yet, even in the face of opposition, the state government and the police department have deftly stood their ground.

Given strong public support for police actions, it is likely the state will turn up the heat on criminals in the run up to the 2019 general election. 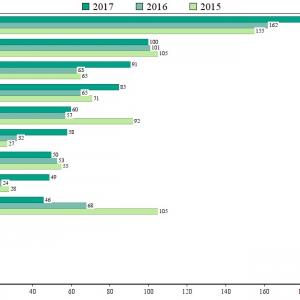